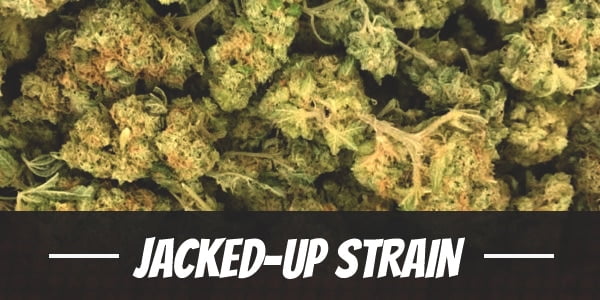 Jacked-Up has the capacity to jack the mind and body up with its stimulating head-to-toe effects. It is the perfect pick-me-up for an otherwise boring day that has users dozing off by noon. Of course, nothing short is expected from an herb whose lavender buds are covered with a rich, sparkling coat of trichomes as well as green hues with fiery hairs.

In developing the strain, Heroes of the Farm took two industry staples to create the impressive Jacked-Up. From its name, one would guess part of its genes are attributed to the famous Jack Herer which takes users beyond t he clouds with its intense cerebral high. Meanwhile, its ability to warp the mind to another dimension is from Timewreck. The Sativa-dominant strain also strengthened its offspring’s genes and therapeutic capacity.

Though the creators later passed it to TGA Subcool Genetics, the high-flying effects of the bud remain just as outstanding. It boasts THC levels that exceed beyond 20% but average between 19% to 23% for most of the batches produced. The unique genetics of the herb has given it a taste and smell that are one-of-a-kind.

Individuals that need a boost in the middle of the day should look no further than Jacked-Up. Minutes after the first hit, it delivers a euphoric rush that energizes users. Not only that, it also invigorates and clarifies the mind of negativity, stress, and self-depreciating thoughts. Replacing is a happiness that radiates from within.

As one revels in what the uplifting buzz, an urge to head off to the kitchen comes about. Getting up to prepare some grub can sometimes derail one’s train of thoughts. Because of this, it is best have snacks ready before using the strain.

Soon enough, subtle waves of relaxation crash into the body’s shores. It creeps in Indica fashion – slow, subtle, and without rush. It works its way down from the temples to the rest of the muscles until one is completely enveloped in a soothing sensation.

Jacked-Up has a fruity aroma reminiscent of berries. It is sweet with hints of citrus.  Broken apart, it releases an herbal overtone with floral undertones that get stronger as the buds are combusted.

Drawing in Jacked-Up’s sweet smoke reels in the sweet flavor of berries and lavender. There is a subtle hint of citrus that is detectable to keen observers. Balancing it out is a lingering woody aftertaste on the exhale.

In exorbitant amounts, Jacked-Up can sometimes jack users up as its name may suggest. It can be dizzying and, at times, disorienting. The heightened sensation can also be quite anxiety-inducing with some people feeling a little paranoid. To keep the effects pleasant, one must remember to use the strain in moderation as well as pace its dosage.

A cottonmouth is also possible after using Jacked-Up, along with a mild case of dry eyes. Although seldom bothersome, beginners might feel a little hassled by the discomfort. In such cases, it is best to relieve the ache by hydrating the body with a few glasses of cold water throughout the day.

Presumably, Jacked-Up is used for recreation. Still, the bud is not without its benefits. Its cannabinoids, such as THC, CBD, and terpenes, all work together to alleviate a myriad of mental or physical health afflictions.

Among the Sativa-dominant bud’s best uses is appeasing symptoms of stress such as fatigue. In doing so, it induces a positive behavioral change that reduce overwhelming dread as well as calm fast-paced thoughts caused by anxiety. As such, it is also a source of comfort among people with mental health issues like depression, PTSD, and anxiety.

One of the best times to use the bud is right before a meal. This is because the same stimulating compound also encourages a hearty appetite as it frees the stomach from common aches and pains. Meanwhile, the physical effects that induce the relaxing body high also cradle users to bed. For this reason, it is a great sleep-aid for patients with insomnia as it not only enhances the quantity of sleep but also the quality.

Jacked-Up does not only pertain to the strain’s the stimulating effects the bud induces, but also to its towering height which make the plant seem doused with growth hormones. Not to mention, it has large colas that are filled to the brim with resin. The well-endowed plant may need to be staked though, as its stalks are lanky and lack strength in carrying the weight of its heavy buds.

Indoors, growers must remember to provide ample space between the plants within a square meter. As alluded to earlier, it grows quite large. Putting it too close with one another will inhibit the circulation of light and air in the lower nodes. At the same time, the Sativa-dominant bud must also be topped early to encourage better yields as well as control its height. Cutting away dead branches or leaves will distribute nutrients to healthier parts while encouraging lateral or side branching.

Overfeeding is normally not an issue with Jacked-Up. In spite of its lanky frame, it requires an ample amount of nutrients and water. This is precisely why it reacts well to hydroponics systems that produce ‘cleaner’ buds in nutrient rich hydro mediums. Although, for growers who place an emphasis on richly flavored buds, soil is the best choice.

Utilizing the Screen of Green method and supplementing it with a High-Stress Training technique like Super Cropping will turn the plant into a even more vigorous yielder. However, aspiring growers must remember to soak the plant before germinating its feminized seeds to increase female plants. Meanwhile, exposing it to low stress will keep it from turning into a hermaphrodite.

In gardens or farms, a warm weather with ample sunlight and day hours is what the plant prefers. This is not to say that Jacked-Up will not flourish in the northern hemisphere, where the climate is generally unfavorable for the tropical-loving strain. Rather, it will stretch its flowering period but will thrive regardless.

TIP: Buy seeds like Jacked-Up at our seed shop

Jacked-Up has an indoor flowering period of 8 to 10 weeks. Once ready for harvest, it yields 12 to 16 ounces of buds per square meter.

In the northern hemisphere, Jacked-Up flowers from the mid to late October. Growers usually harvest at least 16 ounces of buds per plant.

Have you ever smoked or grown your own Jacked-Up? Please let me know what you think about this marijuana strain in the comments below.