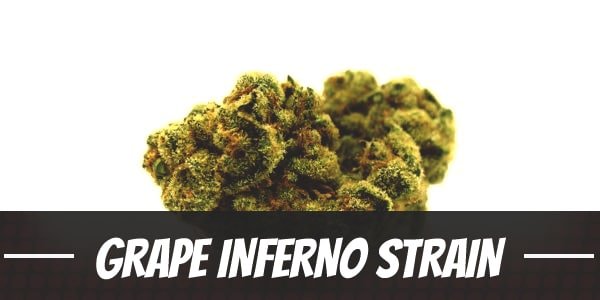 Hand in hand, TGA Genetics and Norstar Genetics developed Grape Inferno – one of the finest strains in the cannabis industry.

As far as looks go, this strain is very attractive. It is a striking bud that boasts an amalgam of lavender, purple, and pink, signaling interested enthusiasts of its delicious flavor profile. Meanwhile, a thick coat of trichomes allude to its potency which average between 18% to 23% THC.

Besides smelling and tasting great, the herb also has favorable effects. It brings together a elating head high with a relaxing comedown that lasts throughout the day. As such, it may not be the best idea to use it in the morning or early afternoon where there is much to be done.

To develop the herb, the breeders picked strains the mysteriously elusive Nepali OG and paired it with the ever popular Querkle. The cross is undoubtedly among the most interesting too, as many had considered each to be a far cry from the other. Still, the two produced an offspring that lived up to both its distinguished fruity flavors, potency, and Indica heritage.

Regardless of how Grape Inferno is consumed, the Indica-leaning herb is a slow starter. Its effects usually start around 15 minutes after the first puff so as not to rush users in with a head slamming high.

During the initial onset, it seeps into the mind with a subtle euphoric stream. It inspires a sense of happiness from within that prompts an upbeat disposition for many casual users. A wonderful party strain, its powerful head high encourage friends to engage in light-hearted conversations while reminiscing cheery memories.

Along with the mental stimulation, too, is a sudden clarity that allows thoughts to flow and form freely. The surge of creativity is often accompanied by a renewed sense of motivation that encourages one to pursue either a passion project or brainstorm for solutions to a complex problem at work.

As the mental effects persist, the same uplifting buzz develops into a soothing sensation that is felt unanimously all over the body. It is the bud’s potent Indica genes manifesting hours after the first puff. In waves, it relaxes the muscles and plants a heaviness in the limbs in each spot it crashes. Keeping users from being totally couch locked is the initial cerebral high despite the imminent urge to relax and unwind.

The smell of grapes fills the air once a bag of Grape Inferno is opened. Enhancing it are notes that blend the scents of flowers and cherries together. Broken apart or combusted, hints of sweet vanilla mixed with earth become apparent.

To fully grasp the depths of a strain’s terpene profile, it must be drawn and savored. With Grape Inferno, there is a mixed flavor of grapes and berries that immediately swarm the mouth at the first puff. The tropical smoke has lingering skunky undertones. On the exhale, a nice hashy aftertaste lingers for quite a while

Grape Inferno casts a dry spell on users regardless of experience. The dry eyes and cottonmouth are due to cannabinoids interfering with the body’s natural ability to produce moisture. Drinking a glass of cold water should provide instant relief but one will have to stay hydrated throughout the day as the ache lasts for hours.

Although rare, users also experience dizziness. Other symptoms of greening out like heightened anxiety and a subtle feeling of paranoia as the bud’s cannabinoids continue to stimulate the mind. This is especially for people prone to such side effects as well as users who accidentally over indulge on the strain.

For the longest time, cannabis has served as a source of comfort by humans. And, with the advancements of technology, it has become possible to attribute its life-changing reprieve to two main cannabinoids which are THC and CBD. Of which, Grape Inferno contains significant amounts that allow it to relieve all sorts of medical afflictions.

For example, the happy high that it delivers serves reduces stress for users constantly bombarded by the daily hassles of life. It frees the mind of overwhelming dread as it stabilizes turbulent emotions. The same mechanism also makes it an effective anti-depressant for health issues relating to depression such as PTSD. Nevertheless, the plant is no cure for the condition. Rather, it serves as a temporary reprieve for the distress.

Physically, one may consume Grape Inferno to relieve pain. Its soothing buzz eases the body beginning from the temples to effectively get rid of aches in the muscles. Meanwhile, its anti-inflammatory properties appease redness and swelling in tender areas.

A natural sleep-aid, the Indica-dominant bud efficiently puts users to bed with its blanket of relaxation. For patients diagnosed with insomnia, it is a temporary break from restless nights. Not only that, Grape Inferno enhances the quality and quantity of sleep.

Grape Inferno has the typical structure of an Indica-dominant strain. It is short and stocky with buds that are equally dense. In fact, in the palms of one’s hand, the nugs are quite weighted in spite of its popcorn-like shape.

Because of its compact structure, moisture gets stuck easily in between its crevices. As such, it will need to be thinned down by pruning the top to ensure an even canopy. This will also encourage bud growth while ensuring proper air, light, and nutrient distribution.

With that said, Grape Inferno is not at all a tricky plant to cultivate. It is sturdy enough to withstand various unpredictable factors such as strong gusts of wind or sudden changes in weather. And, although it prefers a warm environment, it has no problem adjusting to the cooler environment of the northern hemisphere.

Soil mediums, especially one that users nutrient-packed super soil, remains superior when it comes to setups. Although, one may still opt for soilless ones such as hydro or aero in developing the plant to its full potential. Moreover, such techniques use less chemicals like pesticides.

As alluded to earlier, Grape Inferno produces small circular buds. However, it is its striking mix of lavenders, purples, and pinks that make each nug seem like the fruit itself albeit in varying ripeness. To achieve this, aspiring growers must make sure to expose the plant to cooler nighttime temperatures as it nears the end of its maturation cycle. Adding support to its branches will help keep it from breaking off due to the yield’s heavy weight.

Patience won’t be necessary as Grape Inferno flowers in 8 to 9 weeks. Given that it’s grown by a veteran, the plant produces 16 to 18 ounces per square meter.

In the outdoors, Grape Inferno finishes by the end of September. Under the right conditions, it can produce massive yields there. Experienced growers can an amazing get 21 to 39 ounces per plant.

Have you ever smoked or grown your own Grape Inferno? Please let me know what you think about this marijuana strain in the comments below.