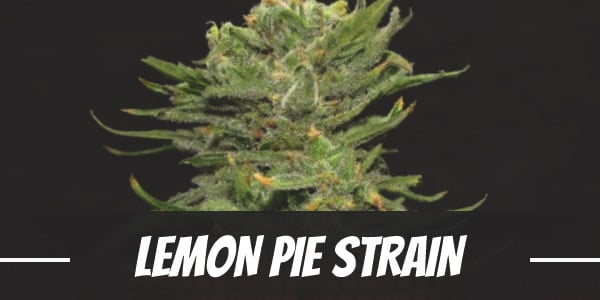 Biting into a piece of lemon pie enlivens the palate with its creamy filling and whipped cream top. It is the perfect dessert for those who need a quick pick-me-up. In the cannabis industry, a strain which goes by the same name has similar effects.

Lemon Pie induces an uplifting head high through its delicious lemon-flavored smoke. Not only that, it is impressively potent. With THC levels averaging at 22%, the Sativa-dominant bud has the capacity to bring users to soaring new heights and absolute bliss. Interestingly, it cradles the body gently into a state of relaxation during the comedown.

the product of a said cross between Skunk #1 and Amnesia Haze. It’s a member of a line of strains from Leafs by Snoop. Being a strain developed by Snoop Dogg himself, it is one that many would get their hands on. After all, the rapper is one of the world’s most famous cannabis users. In fact, his name has been synonymous with the plant since he rose to fame.

Lemon Pie is the go-to strain for users looking to spice up the day. It sets quickly, almost immediately after the first two to three puffs, and delivers an energizing buzz all throughout the body. As it spreads, it reinvigorates users through and through.

The behavioral change is instantly visible. Users are easily deemed to be in an upbeat disposition as an innate happiness radiates on the outside. With the mind clear, it is not uncommon for users to experience a surge in creativity. Thoughts flow freely and form into innovative ideas which make the bud a great companion for a brainstorming session with friends.

After about an hour or two, a light pressure from the temples gradually swarms the body. In spite of its intensity, the Indica effects are not at all sedating. Rather, it soothes the muscles and adds a bounce in each step while replenishing one’s stamina for longer periods of concentration.

Contributing to Lemon Pie’s pungent fragrance is its high levels of THC. From the first whiff, it tantalizes the senses with the sweet scent of lemons accentuated by citrus. Broken apart or combusted, it fills the room with an aroma of spice and diesel.

Lemon Pie tastes like sweet citric oranges combined with fresh lemons. On the exhale, its smooth smoke leaves a subtle spicy aftertaste with notes of diesel.

Lemon Pie can sometimes make users dizzy and paranoid when used in high doses. Experiencing a mild headache is also possible. For this reason, it is important to exercise caution while using marijuana.

Apart from the effects stated above, Lemon Pie can also dry the eyes and the mouth. This is not an uncommon experience among enthusiasts. After all, THC does inhibit the body’s ability to produce moisture. Though many ignore the symptoms due to its mildness, those who experience discomfort may down a few glasses before, during, and after the session to stay hydrated.

Lemon Pie’s energizing and mood enhancing effects eases physical and mental fatigue caused by either stress or overwork. It calms the mind and shines a ray of hope for those feeling overwhelmed by tasks. At the same time, it reinvigorates the body through a surge of energy.

The Sativa-dominant bud also has positive behavioral effects. For one, the same happy high provides a reprieve for users suffering from mental health issues like depression or PTSD. It helps manage the conditions by temporarily appeasing symptoms such as hopelessness and severe anxiety.

One of the best times to use Lemon Pie is a few hours before a meal. It encourages a hearty appetite and works particularly well for debilitating eating disorders such as anorexia.

The same psychoactive compound also contains muscle relaxing properties which help reduce pain beginning from the temples. In fact, it helps alleviate aches caused by eye or intraocular pressure which can lead to glaucoma if left unattended.

Download my free Grow Bible and grow your own Lemon Pie!

Lemon Pie is not difficult to cultivate regardless of its environment. It is incredibly resistant to mold, absolutely sturdy, and retains an Indica structure in spite of its Sativa genes. Moreover, has a low calyx to leaf ratio which helps growers trim the bud with ease for better air, light, or nutrient distribution.

Still, it grows relatively tall and may require height management techniques such as the Screen of Green to keep it short. The same method also encourages better trichome production as well as a faster flowering period.

Despite being quite tolerant of mold, growers must take care to not expose the plant to high humidity levels as it the buds and roots may rot. Constant sunshine, along with a well-aerated environment, is also necessary so the plant grows to its full potential.

Each bud of Lemon Pie is a feast for the eyes. It boasts a strikingly thick layer of crystal trichomes, which hide its sage hue, allude to its potency. Flashes of brown and orange hairs are also noticeable.

For the most part, home growers that plan on growing Lemon Pie are out of luck. Leafs by Snoop maintains a proprietary hold on its product. Still, this assures enthusiasts of a safe, chemically stable bud that is delicious overall.

At 9 to 11 weeks, Lemon Pie flowers faster than most other Sativas. Once ready for harvest, it yields up to 18 ounces of buds per square meter.

Lemon Pie thrives best in warmer, more sun-soaked climates. As such, it may take up to the first week of November to flower in countries found in the northern hemisphere. Most of the time, however, it blossoms around the second to the last week of October with each plant producing up to 21 ounces of buds.

What is the Lemon Pie strain yield?

Lemon Pie yields up to 18 ounces per square meter indoors and up to 21 ounces per plant outdoors.

How much THC does Lemon Pie have?

What are the origins of the Lemon Pie strain?

Lemon Pie was created by Snoop Dogg, and is a cross between Amnesia Haze and Skunk #1.

Have you ever smoked or grown your own Lemon Pie? Please let me know what you think about this marijuana strain in the comments below.