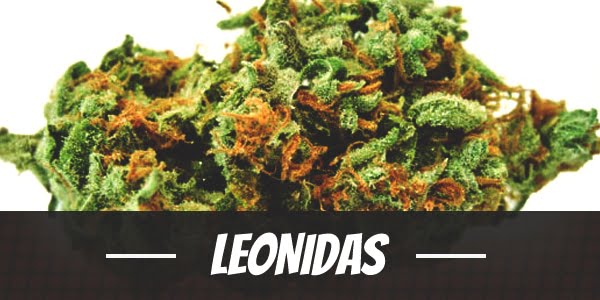 One of the many strains made for the medical market, Leonidas has CBD levels high enough to provide a reprieve to ailing comrades of the cannabis community.

In creating the bud, Tweed took inspiration from Super Silver Haze. A superb hero in the world of cannabis, it has won multiple awards for its therapeutic and recreational value. Since its release in the early 90s, it continuously gets sold out in both online and physical stores.

Using the same parents (Haze, Northern Lights, and Skunk #1), the Canadian licensed producers made their very own Super Silver Haze and named it after Sparta’s most notable hero.

Though bred as a medical strain, Leonidas also makes for a great recreational bud. With THC values of up to 20%, it can be an excellent strain for getting tasks done in the afternoon.

Like the Spartans, Leonidas packs a punch. At up to 20%, it induces a pronounced psychedelic high that can quickly usher in an immeasurable sense of happiness. While some speculate this mental stimulation to be distracting, it actually is not. Far from it, it promotes clarity of the mind that has the potential to unlock creativity. And, with a keener sense of focus, users can truly pour their time on tasks at hand.

The hybrid also sends a zap of energy to the brain. Thus, it is not uncommon to see tired souls suddenly waking from their lethargy and feeling reinvigorated.

Soon, the creeping Indica begins to take over. Ebbing down from the temples is a soothing sensation that deeply relaxes the body. Although intense, it does not cripple users. Complemented by an energizing cerebral buzz, it can sometimes cause some users to feel aroused. A natural aphrodisiac, it is best to toke this strain in the afternoon and, perhaps, with a special someone.

As mentioned earlier, Leonidas contains very potent levels of THC. When consumed excessively, it can easily knock users out and put them to sleep.

Leonidas has a pleasant fragrance that’s akin to most purple strains. It smells like sweet grapes with strong floral notes of violets and lavenders. As its buds are crushed, it releases a subtle aroma of damp earthy.

Leonidas tastes just like how it smells. Its flavor is largely marked by grapes that are ripened and sweet. Drawing in the strain reveals the herbaceous taste of lavenders. On the exhale, its floral undertones overpower the fruity profile.

Strains specifically made for the medical community are engineered to have little to no negative effects. The same principle rings true in the case of Leonidas, which only causes dryness in the mouth. Luckily, its typicality makes it an unlikely symptom to worry about.

However, it is believed that toking large amounts of Leonidas may cause some users to feel a little paranoid. After all, the strain does lean toward Sativa. The good news is that it will eventually fade away once consumption is paced.

Leonidas is the quintessential medical strain. It owes its very existence to the demands of the market. Hence, it is no surprise that Leonidas shines brightest when used as a therapeutic aid.

Its intense Sativa high relieves users of negativities and places them on a pedestal of happiness. Such mood enhancing qualities help users cope with stress. It may even be a source of comfort for those with depression and PTSD. These same psychoactive compounds can also stimulate the appetite.

But, that is not at all. Leonidas also appeases some physiological problems. It has soothing properties that not only make it an effective painkiller but also a great sedative. It may even be better at getting people to bed than synthetic sleeping aids.

At up to 3% CBD, Leonidas has more than enough medical value for it to help epileptics reduce convulsive episodes. The FDA even recommends using cannabinoids in addressing severe involuntary muscle contractions. But with the approval of a physician, of course.

Despite all the goodness it provides, Leonidas is not sold in any dispensary. Like other licensed producers, Tweed is the only breeder with exclusive rights to the medical strain. As such, it is not available for cultivation. But, judging from its lineage, it likely thrives in temperate, semi-humid climates.

It seems unlikely that Leonidas was grown outdoors. To reproduce the same chemical structure continuously, controllable environments are needed. Moreover, as a commercial strain, it must be exposed to growth methods such as Screen of Green (SCRoG) and Low Stress Training (LST) for vigorous production.

At 9 to 10 weeks, Leonidas’ flowering period already lasts longer than most cannabis varieties. However, it also means harvest 8 to 12 ounces of trichome frosted buds per square meter.

While best grown indoors, Leonidas can still be grown outside. In warm regions, garden growers can expect at least 12 ounces of buds per plant by mid-October.