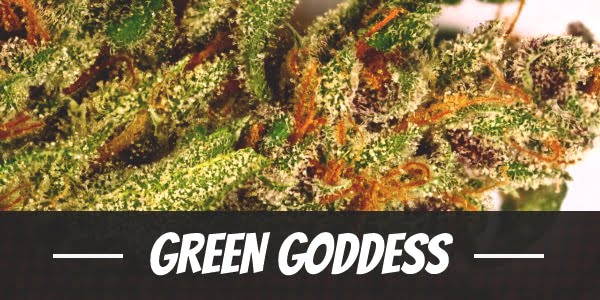 Green Goddess provides a euphoric buzz that sends its users straight to the heavens. From a soaring high, heavy-hitting physical effects bring users back to land in pure bliss. Indeed, this hybrid is a gift from the gods.

This deity of a hybrid took its divine powers from two powerhouses. One, though, has remained mostly unknown. Nonetheless, the elusive Sweet Leaf contributed significantly by passing on its Indica genetics. Green Goddess boast of exceptional cerebral stimulation. On its structure, even if it is only 30% Sativa, the psychedelic high passed on by Skunk #1 remains intense.

During its onset, the euphoric head high Green Goddess induces is reminiscent of Skunk #1. It is very pronounced and can quickly usher in the sense of happiness. In moderation, the mental buzz is quite intense, but it does not cripple users. Instead, it promotes clarity of the mind and unlocks creative thoughts. In most cases, the senses feel amplified. And, with sharpened focus, it is easier to stay on track of chores or things to do.

For the most part during the cerebral high, the hybrid supplies a continues burst of energy. Feeling upbeat and energetic, its users not only can stay productive but also be socially enthusiastic.

Later, an ebbing sensation drifts down from the neck down the spine. As it increases in intensity, the uplifting buzz now puts the body in deep relaxation. Its effects though is not debilitating.

For most people, the best time to use Green Goddess is during the afternoon. The mental stimulation and energizing buzz allows one to complete tasks before settling down and chill for the rest of the day. And, one more thing. In this state, some people may find themselves aroused. In fact, this hybrid is what one may consider to be an aphrodisiac.

Green Goddess is a highly potent hybrid. When used excessively, its effects may be too intense and render one on a couch-lock.

Like a bouquet of flowers, Green Goddess boast of a fragrant floral scent mixed with an earthy undertone. It also emits a mild citrusy hint of lemon.

As a descendant of Skunk #1, users can expect the same flavors that became a signature trademark of its parent. A mild skunky note accompanies its mix of lemony and earthy taste. Users should also find taking a hit such a pleasurable experience as its smoke is smooth on the throat.

Using Green Goddess, or any marijuana for that matter, can cause dryness in the throat and, to some extent, the eyes. These are the two typical adverse effects that users can expect. It is also quite possible that some people may have a slight headache.

Another thing that is good to know beforehand is that this hybrid can increase anxiety level. It can also cause some to feel paranoid. As such, people who are already going through related mental conditions should avoid using it. Other than that, the cause could also be overindulging.

Green Goddess is not only for recreational use. While its CBD content is rather ordinary, it is more than enough to help people deal with minor body pains and aches. Its best use though is through its euphoric and uplifting psychedelic high.

In ushering in the feeling of happiness, it follows that stress is effectively wiped out. The mood-swing can help alter the perspective of people going through depression. If only for a few hours, it provides a reprieve from the negativities surrounding an individual.

The same psychoactive compounds can also stimulate the appetite. Of all medical patients, boosting the appetite has the most value to those undergoing chemotherapy.

Green Goddess is not available in seed form. As such, the only way to cultivate it at home is by obtaining a cut. Sturdy and hardy, it thrives in a semi-humid to warm climate where the temperature ranges from 21°C and 26°C.

Once mature, it produces dense buds with shades of green from the lightest to the darkest. Giving it a diving appearance is the frosty trichomes covering the buds while surrounded by dark brown pistils.

Once the plant enters the flowering stage, it takes between 10 to 13 weeks before it is ready for harvest. A typical yield is in the range of 10 to 12 ounces per square meter.

In most cases, harvest time falls on the second to third week of November in the northern hemisphere. Growers can expect some 12 ounces of buds per plant.

Have you ever smoked or grown your own Green Goddess? Please let me know what you think about this marijuana strain in the comments below.