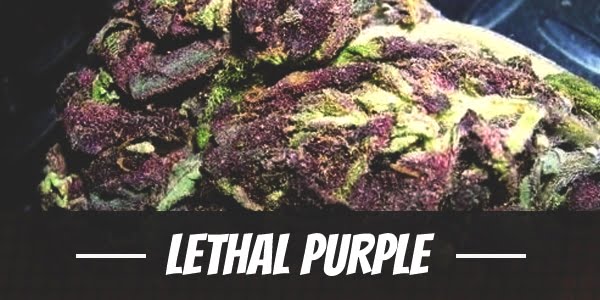 Often, people associate exceptional cannabis with Amsterdam and California. But that is not where some of the best ones are only found. Farther up the North American continent, there is the Lethal Purple from Canada.

From what we could gather, this strain leans more towards its Sativa side. One of the goals, while it was being bred, was to have a hybrid that can thrive in the prairies. Besides that, one thing that is notable about this strain is its purple color.

We are not sure if it is accurate, but some sources have cited the parent strains of Lethal Purple as being a cross of Haze and Blueberry. If that is the case, those are two powerhouse strains that have already achieved legendary status in the world of marijuana.

What we do understand is that the original Lethal Purple was bred by an outfit called Great White North Seeds. As for its seeds, it is being made available by another outfit called Canadian Bred Seeds. Whether the two companies are the same or not, we do not know at this point. Suffice to say, so as long as there is one entity making it available for growers, then more people can enjoy this unique variety.

The purple in its name mainly refers to the color of the plants. Unlike some other strains, having a purple hue is a result of exposing them to colder temperature before flowering, this hybrid really is purple as it matures. With that being said, the other part of its name seems to foretell of what is to come.

Possessing some 19% to 20% THC, it is incredibly potent. The original strain was about 60% Indica, but this latest iteration appears to be around 80% Indica. It means that besides the cerebral effects that one can expect, it is the physical high that promises to be exceptional.

Lethal Purple begins by delivering an uplifting mental buzz. In turn, this leads to users having a clearer head and with a better ability to focus. It also turns even the most passive person into a politician. What we mean by this is that it causes people to feel more sociable. In fact, many users find themselves becoming talkative.

Meanwhile, the physical effects of the strain continue to creep in. As it intensifies, most users not only find themselves in deep relaxation but also lazy. The numbing buzz does bring in medical benefits which will be covered in another section. Suffice to say; its Indica side is lethal to the discomforts users are enduring.

Lethal Purple not only looks beautiful. From its leaves to the buds covered with frosts, it is a delight to gaze at, and so is its aroma. It has a pleasant floral scent with a sweet note of grape that many people will find enticing.

As mentioned, it is beautiful and smells delightful. But wait, there’s more. Much of its flavor is the same as how it smells. So, one can just imagine how great it tastes.

Lethal Purple is not to be underestimated. As mentioned, it is an incredibly potent hybrid and once users consume too much, then some of these reactions may become pronounced. Not that it is harmful, but it can be uncomfortable.

Dryness of the eyes and cottonmouth are two pervasive adverse effects of using marijuana. Aside from these two conditions, some people may also experience dizziness or have a headache. These become worse as consumption increases.

Recreational users can certainly appreciate the cerebral high that this strain induces. It is potent yet gentle, and it does not overwhelm users. Even after the heavy Indica effects kick in, the mind remains clear. But for medical cannabis users, it is also that euphoric buzz that helps relieve them of stress. Other people who are suffering from various forms of mental conditions including depression can also benefit from this hybrid.

The numbing body buzz not only put people at ease, it also somehow dampens the severity of pain. People with chronic illnesses do have to endure a certain degree of pain, and this strain can provide comfort even if only for three to four hours at a time. In most cases, patients tend to fall asleep even before the effects of the strain completely leaves the body.

Cultivating Lethal Purple is not going to be much of a problem even for beginners. While there is a learning curve, it is also manageable. Growers do have the choice of growing it indoor or outdoor. Either way, all one needs to do is to follow basic cannabis gardening, and it should thrive well enough.

Lethal Purple has a flowering period of eight to nine weeks. As it reaches maturity, revel in its color as it turns purple. During harvest, growers can expect to pick up 16 ounces of buds.

The best climate for Lethal Purple is in a temperate or colder environment. In warm climates, make sure that the plant has ample shades. It should start to flower towards the end of September, and each plant will likely produce up to 16 ounces of buds.

Have you ever smoked or grown your own Lethal Purple? Please let me know what you think about this marijuana strain in the comments below.