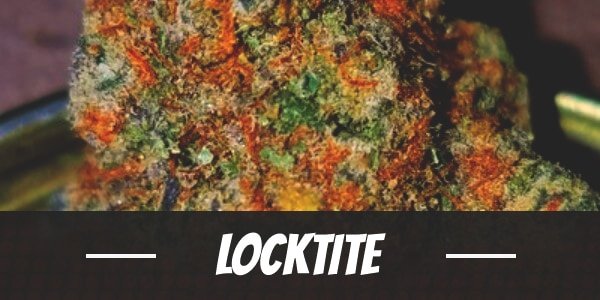 Hearing its moniker strikes fear into the hearts of many enthusiasts. After all, not a single smoker would want to be glued to the couch. In truth, however, Locktite rarely induces a couchlock in spite of its up to 23% THC.

A more plausible theory for its name is its heritage, a combination of Gorilla Glue #4 and Mt. Rainier which are both famous for their sticky buds. Red Eye Genetics saw one flaw in the former, its lack of a sturdy structure and loose internodes. Wanting to improve on that, they crossed it with the latter which made ripples in the industry for its hardiness.

In many respects, one may say that Locktite is an improved version of its Gorilla Glue #4. The flavors and effects that it induces are almost identical. However, a key differentiating factor is that it delivers a more pronounced body high. Still, its powerful mental effects prevent users from getting sedated while under the influence.

Locktite is a hard-hitting herb that bombards users with its potency when used outside of one’s tolerance. In moderation, however, it is quite the charmer. It introduces its onset with a fast-acting cerebral buzz that is uncommon for Indica-dominant strains.

TIP: Looking to buy seeds like Locktite? Check out our seed bank

Smoothly building in intensity with each puff, it uplifts the mind slowly until an innate sense of happiness takes over. Seeing behaviors change is almost immediate as giggles escape the mouth. Often, too, the rush of euphoria eradicates negativity so users are truly sent to the land of bliss.

Over time, a mild pressure erupts from the temples. It is the same uplifting buzz from the initial onset but, this time, it creeps to the rest of the body. Spreading into the muscles, it slowly but gradually envelops users in deep relaxation. Without the sedation or lethargy, the party strain is a great choice for smoking with friends so interesting and light-hearted conversations take hold.

While it is possible to enjoy Locktite as a daytime treat, it is better suited for evening use. The reason being its propensity to affect functionality. Although it is not sedating, its sheer potency may distract.

As a high THC strain, Locktite carries a pungent fragrance that can fill the room with the sharp aroma of diesel. Enhancing it are subtle hints of lemon or citrus that are soon overpowered by the refreshing scent of pine once the buds are broken apart. Once combusted, however, its smoke is absolutely earthy.

Drawn in, the blended sweet flavor of citrus and herbs enters the palate. Lurking undertones of its delicious smoke are freshly uprooted pine that features a faint earth. On the exhale, a diesel-like aftertaste with a bit of spiciness that lingers even after the last puff.

It is possible to feel a little overwhelmed once Locktite’s effects first hit, especially after consuming too much of the herb. A disorienting dizziness resulting from the heightened sensations can sometimes trigger anxiety. Headaches often accompany the symptoms of greening out too. As such, practicing moderation and pacing during sessions is essential.

For the most, however, users only feel dehydrated as moisture-inhibiting cannabinoids interfere with the production of saliva. To some degree, the eyes also dry and redden. The side effects usually last for hours but downing a few glasses of water right after the session, as well as staying hydrated throughout the day, will ease the discomfort.

With parents having immense pharmacological value, it is no wonder that Locktite shares the same trait. Its beneficial effects ease various mental and physical conditions that may be plaguing users.

It instills a happy high that makes one forget about being fazed with problems. Through its rush of euphoria, it relieves stress and temporarily manages of depression. Though it is a reprieve for many sufferers of mental health issues, it is not at all a cure. Seeing a therapist or psychologist is still the best option when it comes to long-term treatment.

With that said, the same stimulating compound also encourages a hearty appetite. As such, one of the best times to use the strain is right before a meal.

A natural painkiller, Locktite eases various types of pain beginning from the temples. It soothes each muscle until the presence of tension, contraction, and ache is gone. Naturally, the liberation from physical torment prompts a faster sleeping rate while enhancing both its quality and quantity. As such, it is an ideal choice for insomniacs.

Locktite’s prominent Indica genetics give it a short stature that fits most growing spaces. While it rarely needs to be topped early, it may have to be trimmed often. Also from its genes is a compact structure that easily harbors moisture that develop into mold or mildew when left alone.

Powerful fans, an effective ventilation system, as well as proper spacing between pots, is heavily needed for indoor growers. A combination of all three will help aerate each square meter of plants. Apart from its low resistance against humidity, the plant is also a heavy-brancher and will grow laterally.

In the outdoors, strong gusts of wind are not much of a problem since Locktite is sturdy. Pest and disease may stunt the plant’s grow though. As such, protecting it through various management techniques is important.

Red Eye Genetics has yet to fully release their creation in seed form. Even so, regular types pop up occasionally.

Locktite is a quick-flowering plant that matures within 7 to 9 weeks. Regardless of skill, is typically between 10 to12 ounces of buds per square meter with more rewards for seasoned growers that coax the plant with various growing techniques.

The resilient Locktite is not one to struggle when fazed with the colder weather of the northern hemisphere. It matures from the last week of September to the middle of October, with each plant producing at least 12 ounces of buds per plant.

Have you ever smoked or grown your own Locktite? Please let me know what you think about this marijuana strain in the comments below.