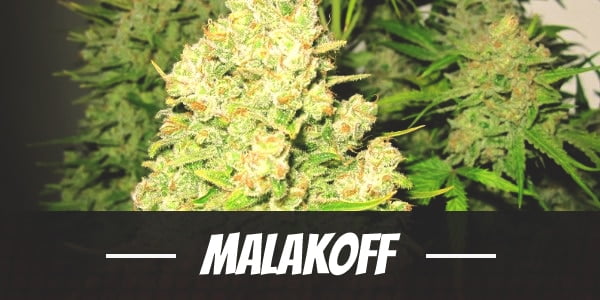 Medical Seeds is dedicated to easing the various aches and pains of patients. As such, its laboratories in the sunny country of pain have developed countless new strains. One of which is Malakoff, a Sativa-dominant strain that may have been named after Switzerland’s ball of fried cheese which brings joy with each bite.

Interestingly, not a trace of cheese is present in Malakoff’s genes. Instead, its parents are the fruit-flavored Strawberry Haze and arachnid-inspired White Widow. The former influenced its offspring’s Sativa genes as well as head-flying high. Its crystal appearance, as well as boost of energy, on the other is an obvious inheritance from the latter. Its pride though is its short vegetative cycle which has cultivators getting past it within a week or two.

With little CBD and 20% THC, Malakoff also makes for a perfect recreational smoke. The high that it delivers is energizing and mood enhancing with little to not physical tiredness.

Malakoff showcases its effects almost immediately after the first puff. An energizing buzz surges through the mind and inspires a livelier, more upbeat behavior. Usually, too, users feel happy from within after a change in perspectives.

TIP: Buy seeds like Malakoff at my marijuana seed shop

Like a true psychedelic, the strain alters perceptions. It sharpens one’s focus and, as the mental clarity persists, it creates a path for thoughts to flow smoothly. Igniting a creative spark, reforming new ideas or coming up with innovative solutions seeming turns into second nature. Because of its great wake-and-bake qualities, the Sativa-dominant strain is best used in the morning in lieu of coffee.

Casual users may also take advantage of the burst of ideas as a conversation starter. Feeling more confident, even the most reclusive people become chatty under its influence. As such, it can be a tool to ease the tension brought upon by social situations.

Though the effects wane away after a few hours have passed, it is not uncommon for one to still stay productive as users feel entirely rejuvenated.

Enticing the nasal senses is the sweet fragrance of freshly picked strawberry. It is enhanced by notes of wet soil that are rounded by the aroma of wood once the buds are grounded or combusted.

Drawn in, Malakoff swarms the palate with its sweet smoke. Notes of strawberry dipped in cream are apparent as one savors the fruity profile. On the exhale, overtones of pine along with subtle hints of earth leave a refreshing aftertaste.

Dryness is an inevitable side effect of marijuana due to cannabinoids interfering with the production of moisture. Its symptoms are most notable in the eyes and the mouth but are quite mild overall. Although most seasoned users tend to ignore the side effects, beginners may feel uncomfortable though and will have to stay hydrated throughout the day.

As a creation of Medical Seeds, Malakoff contains immense therapeutic value that is revered by users of the medical marijuana community. It relieves both mental and physiological conditions through the combined effects of its THC, CBD, and other cannabinoids such as terpenes.

The stimulating happy high that it provides, for example, quells stress by enhancing the mood and calming the mind. At the same time, it temporarily manages symptoms of depression and other mental health issues like PTSD.

Meanwhile, its analgesic properties relieve various aches and pains beginning from the temples. One of its best uses, in fact, is medicating the painful pressure from behind the eyes which can lead to glaucoma if left unattended. And, in relaxing the muscles, it reinvigorates users through and through.

Malakoff is tall, lanky plant that can reach a height of 10 feet. Like other Sativa-dominant strains, it thrives best in the warm, semi-humid climate of the Mediterranean. However, this does mean it is not safe in the colder, damper weather of the northern hemisphere. Far from it, its airy buds have high resistance against moisture which sometimes seep into hard-to-reach crevices of other plants. It may take longer to flower though due to the lack of sunlight but will yield high well regardless.

Growers should keep an eye on Malakoff due to its vigorous nature. It grows with speeds unmatched and will turn into a giant if not topped at the right time. In such cases, one should turn to FIMing. In addition, growers must also avoid subjecting the sensitive plant to stress as even the slightest strain on it can reduce its short flowering time. Fortunately, Malakoff’s seeds are available online in feminized form so users need not worry about getting half a batch of males.

Malakoff has an indoor flowering period of 10 to 12 weeks. It produces an average of 14 ounces of buds per square meter under the care of a seasoned grower. However, it is possible for experts to shorten its flowering period as well as encourage even better yields.

Flowers usually show up around the middle of October up to the last week. Once mature, growers harvest at least 14 ounces of buds per plant.

Have you ever smoked or grown your own Malakoff? Please let me know what you think about this marijuana strain in the comments below.