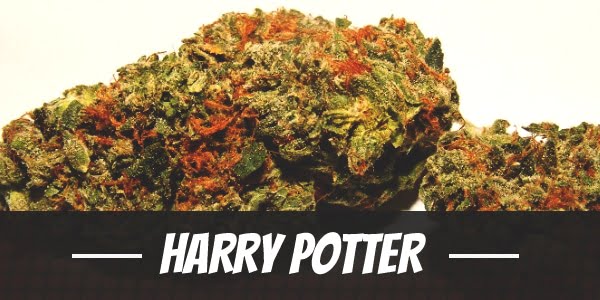 In the books created by J.K. Rowling, Harry Potter is a half-blood wizard determined to triumph over evil through the use of magic. In a similar manner, its namesake bud fights off unwanted, perturbed thoughts with a patronus that will keep it from sucking the life out of users in a similar way that dementors do.

Its 15% to 17% THC casts various other spells too. For example, it can have users giggling with delight as it delivers a delightful out-of-this-world head high. Its body buzz, on the other hand, totally relaxes the muscles while keeping one from experiencing the immobilizing effect of a Petrificus Totalus.

In developing the wizard, Sasquatch Gardens took Blissful Wizard for its magical effects and seemingly pleasant terpene profile. Not only that, the award-winner is a powerful magus with potent levels of THC with a propensity for healing potions. Later, it was crossed with Fire Alien Kush to improve the high-flying, broom-riding head high.

The nature of Harry Potter’s effects makes it an ideal smoke for the latter part of the day. It is a great tool for unwinding, doing extra tasks beyond work hours, or as an added boost that helps lighten the mood during occasions. So long, of course, as it is used in moderation.

Like the character, Harry Potter does not beat around the bush. It is a straightforward bud that delivers its effects almost immediately after a puff or two. Its initial onset is often an uplifting buzz that invigorates spirits and leaves users feeling happy from with.

TIP: Buy seeds like Harry Potter at our seed bank

The mental clarity renews perspectives and allows users to think in ways never done so before. As such, it is not uncommon for one to review a recent problem and find a solution for it. Moreover, the spark of creativity fills the mind with new, more innovative ideas as it creates a pathway for thoughts to flow and form smoothly.

For casual users, the renewed thoughts are often great conversation starters. And, with an improved confidence brought about by self-contentment, it encourages even the most reclusive of introverts to share stories or experiences with others.

After an hour or two, a pleasant body high envelops users in deep relaxation. It begins from the temples as a light pressure before gradually intensifying as a soothing buzz that crushes tensions in its path. Still, it does not sink users into the dreaded couch-lock. When necessary, getting up to accomplish tasks is still possible especially when pacing the bud or using it within limitations.

Even before a bag of Harry Potter is opened, the strong smell of citrus fills the air. Along with it are zesty notes of lime with hints of sweetness from undertones of fruit.

Although one would expect the bud to taste like butterbeer, Harry Potter actually explodes in the mouth with overtones of fruit. Quite powerful is the sweet citrus accentuated by notes of wood. On the exhale, its undertones of lime take over and leave an acrid aftertaste in the mouth.

The most common side effects associated with marijuana are also experience with Harry Potter. These are a cotton mouth and dry eyes, which are mostly due to cannabinoids interfering with the body’s ability to produce moisture. To some degree, users also experience a headache. Such symptoms are almost always mild but can be a source of discomfort for beginners. For quick relief, downing a few glasses of water throughout the day will help.

Cannabinoids are instrumental in the positive effects of Harry Potter. Its THC, for example, does not only induce a recreational high but also relieves stress. Its calm euphoria provides clarity to an otherwise clouded mind filled with negative thoughts or overwhelming dread. In doing so, it temporarily manages symptoms of depression and other mental health issues.

The wizard’s best trait, however, is arguably its tried and tested physically soothing high. It calms inflamed areas by ease redness while reducing swelling to prevent them muscles from involuntarily contracting. At the same times, it helps appease the pain caused by spasms and cramps.

Because of genetics, Harry Potter has an Indica structure with narrow Sativa-like leaves but may express itself differently depending on where it is grown. Regardless, it produces semi-dense buds that are coated thickly in trichomes with subtle purple hues that develop when it is exposed to colder temperature.

There are many growers who prefer cultivating the strain indoors using organic mediums like soil and coco coir to improve terpene flavors. However, soilless mediums such as hydroponics will produce cleaner buds that are not doused in chemicals or insecticides. It may need to be topped early if spaces are too tight although its height is rarely a cause for concern. To increase yields, one can use the Sea of Green method accompanied by other Low Stress Training techniques.

This is not to say the plant will not grow well outdoors. On the contrary, it produces higher yields with a distinct taste that only soil in farms or gardens can bring. But, it will need to be protected against various environmental factors such as humidity, fluctuating weather, as well as pestilence.

What growers should avoid though is to prune their crop too heavily. If that’s done, it may get too stressed and produce lesser results or even die.

Harry Potter has an indoor flowering period of 8 to 10 weeks. It usually yields 12 to 14 ounces of buds per square meter. Applying either the Screen or Sea of Green method will help increase yields.

Outdoor growers should see Harry Potter bloom in October, from the first to last week. A vigorous producer, it is not uncommon to harvest at least 14 ounces of buds per plant.

Have you ever smoked or grown your own Harry Potter? Please let me know what you think about this marijuana strain in the comments below.