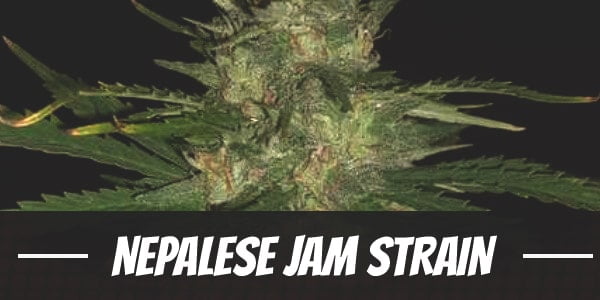 Landrace strains are highly coveted among the marijuana community. Apart from existing for thousands of years, its genes have shaped the current industry greatly. In fact, all of today’s cultivars and hybrids can be traced back to an indigenous cannabis variety.

Such is the case of Nepalese Jam, which directly descends from two of the most influential landrace strains in the world. From a female Nepalese, ACE Seeds took its high-flying head high and strong Sativa structure. Meanwhile, a Jamaican ’85 was added to add vigor in its performance in the grow room. It also influenced its bluish hues and tropical flavor.

The Sativa-leaning Nepalese Jam takes the mind from the beaches of Jamaica to the mountains of Nepal for some focused introspection. It is hardy too, expressing its Nepalese heritage well. Meanwhile, its vigorous yields and high trichome production boasts its Jamaican origins. This combination appeals most to hobbyists and commercial growers of marijuana.

Having between 16% to 18% THC, one can definitely say that Nepalese Jam is not as potent as the strains of today. Still, it is a great source of inspiration for users with a penchant for waking then baking. Its pleasant and lasting buzz clears a foggy mind of haziness.

When used beyond one’s limitations, it can trigger anxiety. In moderation, however, it will ease symptoms of mental and physical afflictions.

Nepalese Jam is a quick-hitting strain with an onset that begins almost immediately after a puff or two. It starts by delivering an uplifting all throughout the body, boosting energies and morale at the same time.

Refreshing tired minds is its zesty tropical smoke. As it persists, the mind wanders on a path to creativity that has been cleared of cobwebs. This freedom unbinds the once restricted flow of ideas leading to a spark in productivity. The heightened motivation, along with enhanced focus, will have users accomplishing tasks.

Soon, a warm and fuzzy sensation works its way down from the temples. Though it gradually intensifies, it does not anchor the body to the couch. Neither does it deliver a sense of sedation. For this reason, it is a great wake-and-bake strain that can put one at ease while completing projects.

It is best to refrain from using this herb at night. Doing so can lead to unwanted restlessness. With that said, the strain is best taken in the morning or early afternoon before the busyness begins.

Nepalese Jam has a subtle tropical scent that take users on a mini spa vacation to the Mediterranean. Accentuating it is the damp aroma of wet soil and wood that entice the nasal senses.

Drawn in, users taste the powerful earthy taste of wet soil. Enhancing it are undertones of wood that eventually bring out its tropical overtones. On the exhale, the fruit-flavored smoke leaves a tangy but zesty aftertaste that continues on even after the last puff.

Users usually experience dryness in the areas like the eyes and the mouth when smoking marijuana. It is no different with Nepalese Jam. Like other strains, it has moisture-inhibiting cannabinoids that interfere with the tear ducts and salivary glands. The dry spell is usually mild, barely noticeable, and often goes away on its own but users may down a few glasses of water to ease the discomfort.

Although rare, it is also possible to experience a little anxiety or paranoia with Nepalese Jam. This is especially true for users who are prone to fast-paced thoughts or have little tolerance to THC. For this reason, it is important to use the strain in moderation and pace consumption as well.

Nepalese Jam’s ability to brighten up one’s day makes it a great stress reliever. Its calming euphoria soothes the mind of fast-paced thoughts that can be quite overwhelmingly dreadful. In addition, it can provides comfort to patients while managing symptoms of mental health issues like depression, anxiety, and PTSD.

The same psychoactive compound also improves the heaviness one feel when totally exhausted from work. Its positive effect on fatigue is the result of its performance as a natural analgesic. It gets rid of pains and aches from all over the body beginning from the temples. At the same time, it distracts the mind from the agony of physical trauma through its mentally uplifting buzz.

Nepalese Jam is an extremely hardy strain. It can be subjected to the whims of nature and still come out on top with a high yield. Moreover, it is impervious to the problems that humidity may cause such as mold, mildew, and botrytis.

Naturally, as a Sativa-dominant plant, it has a propensity for semi-humid climates similar to that of the Mediterranean. In spite of this, it will survive the cooler weather of the northern hemisphere. Its landrace genetics give it a sturdy structure that can withstand the cold temperature, early winters, and late autumns. Additionally, it flowers quickly and makes the most out of the short daylight hours.

Growers may also choose to place it in controlled environments where it truly shines. After all, ACE Seeds fine-tuned the strain specifically for indoor growing. Unlike the bulk of predominantly Sativa strains, it has a short height that rarely exceeds 4 feet. Still, one may choose to prune the plant and bend it for improved light and air circulation.

At the moment, one may choose between feminized and regular form. The former option is great for cultivating an all-female batch where whereas the latter is perfect for breeders looking for a male Nepalese Jam to use as a cross. There is also the added option of getting a clipping from a reliable and trusted source.

It takes at least 9 weeks for Nepalese Jam to fully bloom. When it is mature and ready, green thumbs can expect to harvest between 16 to 18 ounces of buds per square meter. More seasoned growers can use techniques, such as the Screen of Green, to reduce the flowering period by a week.

Late September to early October is the period which Nepalese Jam blossoms in the northern hemisphere. Regardless if one were cultivating in a garden or farm, it is reasonable to expect at least 21 to 28 ounces of buds per plant.

What is the Nepalese Jam strain yield?

How much THC does Nepalese Jam have?

What are the origins of the Nepalese Jam strain?

Have you ever smoked or grown your own Nepalese Jam? Please let me know what you think about this marijuana strain in the comments below.