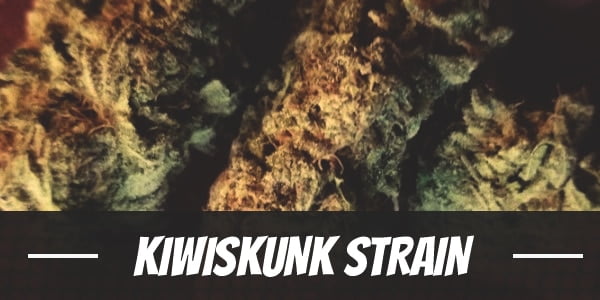 Skunk No.1, in spite being decades old, remains a hit among beginners and veterans alike. Its prowess in the grow room, along with its distinct taste, have significantly impacted the course of the global cannabis industry. If not for its introduction, users would not have had the privilege of enjoying other skunk hybrids borne out of its genes.

Upon reaching the shores of New Zealand, Skunk No. 1 had already produced various phenotypical varieties. It quickly gained traction too, garnering the attention of Kiwiseeds which later decided to cross it with the upbeat, lively, and sociable NYC Diesel.

The result was nothing short of spectacular. From Skunk No. 1 and NYC Diesel’s genes came Kiwiskunk, an Indica-dominant strain that boasts THC levels of up to 20%. Although it plants a heaviness in the limbs, it sedating effects do not start until after the high has ended. During the onset, users feel lighter than air as it undoes the negative side effects of stress while clearing the mind of negativity.

Perhaps its main prize, however, is its performance in the grow room. By having two sturdy parents, Kiwiskunk inherited a natural resistance to humidity-related problems like mold as well as cold temperatures. As a bonus, it is a vigorous producer with an impressive trichome production.

Kiwiskunk is not a fast-acting strain. Au contraire, it is quite the slow starter. Its onset creeps up 15 minutes after the first two or three puffs. Hence, it is not a good idea to continuously take swigs of its skunk-flavored smoke.

In moderation, it induces a calming euphoria that puts the mind at ease. A sense of happiness builds from within as the strain’s psychoactive compounds take one on a relaxing psychedelic trip. With such soothing effects, one temporarily forgets about life’s worries.

Interestingly, in spite of its Indica dominance, the strain makes for a great recreational alternative. Under its influence, users become more upbeat and talkative. Although, at times, the newly-found confidence can lead to being overly chatty.

It is best to prepare snacks ahead of time. After all, the subtle use of energy can be hunger-inducing. Having food nearby, for convenience’s sake, will lessen trips to the kitchen.

A warm and fuzzy feeling later trickles down from the temples. It embraces the body as though it were a long-lost friend providing comfort to a tired soul. Subtle but intense, it destroys tension and tightness in its wake before replacing it with a creeping heaviness.

Although its effects present a likeness to that of a Sativa high, Kiwiskunk is still best reserved for nighttime use. Otherwise, it may hamper productivity when used in the morning.

Kiwiskunk boasts subtle hint of sweetness that is compounded by a fruity undertone. However, its overtones are the powerful aroma of skunk and the soothing scent of wet soil that intensify once the buds are crushed and combusted.

The taste of tangy citrus swarms the palate once a puff of Kiwiskunk smoke is drawn in. However, it is quickly overpowered by a strong skunk. Later, on the exhale, an earthiness washes over the mouth and lingers with a sweetness.

It is common for users of Kiwiskunk to get a cottonmouth after a session. In some instances, there is also a mild case of dry eyes. The two are mild and rarely come with discomfort but, if symptoms persist, one may down a bottle of water to keep the side effects at bay.

As a result of its heavy-hitting Indica high, Kiwiskunk can sometimes leave users with a headache. This is especially true among users who do not pace consumption of the bud. For this reason, it is important to start with low doses.

Kiwiskunk is a great choice for users dealing with certain health issues pertaining to digestive related health issues. For example, it prevents the stomach from cramping so users can eat with a hearty appetite without worries of vomiting. It is this aspect too that makes the Indica-dominant herb a great companion for cancer patients experiencing the nauseating effects of chemotherapy.

The same psychoactive compound also induces an uplifting buzz that frees users from the shackles of stress and depression. Its mood enhancing high also stabilizes emotions while temporarily relieving the mind of its problems.

For most users, the aftermath of a relaxing time is a full night’s rest that rejuvenates the body and mind. Apart from putting users to bed earlier, Kiwiskunk also improves the quality and quantity of sleep.

Kiwiskunk is an exceptional strain that flowers well outdoors, indoors, and in greenhouses. Controlled settings, however, will give growers the advantage of being able to adjust factors like temperature, lighting, and humidity at whim. Moreover, it adds protection against harsh weather and pests.

This is not to say growers should forego cultivating the strain in farms or gardens. In fact, it is quite resistant to mold which gives breeders some leeway when it comes to humidity-related problems. However, there should be added protection against the threat of unforgivable cold or disease carrying pests.

Growers may choose from either regular or feminized form of the strain. The former is a great choice for upskilling as well as breeding while the latter assures one of an all-female batch.

Indoor grown Kiwiskunk finishes flowering between 6 to 9 weeks. Once ready for harvest, it produces 14 to 18 ounces of buds per square meter.

A hardy strain, Kiwiskunk blooms by mid-September to early October in the colder weather of the northern hemisphere. One may expect to harvest 18 ounces of buds or more per plant.

What is the Kiwiskunk strain yield?

How much THC does Kiwiskunk have?

What are the origins of the Kiwiskunk strain?

Kiwiskunk was created from a mix between NYC Diesel and Skunk No.1.

Have you ever smoked or grown your own Kiwiskunk? Please let me know what you think about this marijuana strain in the comments below.