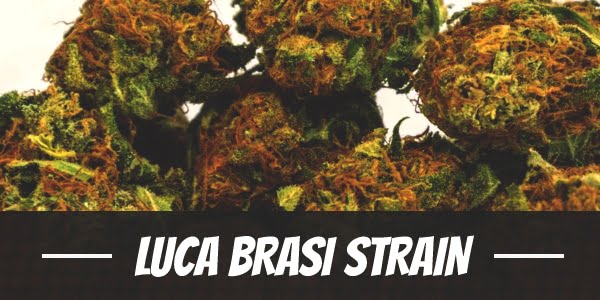 Many may remember the Corleones as the famous crime family in Mario Puzo’s critically acclaimed The Godfather. Though years have passed, the book and its subsequent movies continue to rouse the interest of the public. In fact, a strain was named after it.

Corleone Kush is an Indica-leaning strain that is just as powerful as the fictional Mafia family it is named for. It induces a calming euphoria that first uplifts the mood before eventually settling down into the limbs. A few puffs are enough to induce a deep relaxation that develops into a sedating comedown as it ends. This heavy-hitting strain was later crossed with Pre-98 Bubba Kush, another predominantly Indica strain that provides immense therapeutic relief against mental distress and physical pain.

This led to the development of Luca Brasi, the famous and loyal bodyguard of Vito Corleone. It is equally as heavy hitting as its parents. It makes for an excellent companion after a stress-filled day which users could consume the strain with friends or alone. It produces a gentle recreational high that intensifies into a sedating comedown.

Having nearly a 1:1 THC to CBD ratio, it is no doubt that Luca Brasi has immense therapeutic capabilities. It provides relief to patients dealing with mental and physical health issues that diminish one’s quality of life.

Apart from having a moderate 12% to 16% THC, Luca Brasi also contains copious amounts of CBD that counteract any chance of being potentially overwhelmed. In fact, its brand of high is a mellow recreational high that starts off with a gentle euphoria. It uplifts the mood and clears the mind.

In moderation, users could enjoy the earthy strain as a wake-and-bake companion. The sense of clarity sharpens focus and, at the same time, creates a path for thoughts to flow and form freely. Complementing the productive head high is a mild, soothing sensation that relieves the body of stress. In this way, users could complete light physical tasks that will help cross off To-Do Lists.

Users consuming the bud at night may take a few extra puffs for a night of stress-free relaxation. After two to three hours, the light pressure eventually develops into a stone-solid heaviness that weighs down the body. A drowsiness soon begins, lulling users to bed. Hand in hand with Mr. Sandman, one travels to the land of dreams in a cloud of happiness.

Luca Brasi has a strong pungent aroma. It has earthy overtones with peppery undertones that becomes spicier after breaking it apart. Combusting the buds, on the other hand, brings out its Kush and lemon hints.

Consuming its chunky nugs coats the palate in the flavorful blend of herbs and earth. It is enhanced by peppery, lemony, and Kush-y undertones. On the exhale, it leaves a spicy aftertaste.

The presence of moisture-inhibiting cannabinoids in Luca Brasi means that users will most likely end up with arid eyes and a cottonmouth. It is mild and users can manage it by downing a few glasses of water before, during, and after the high. Staying in moderation is also essential as it prevents any potential dizziness, anxiety, and a feeling of paranoia.

Luca Brasi contains between 11% to 15% CBD, the compound which contains immensely therapeutic qualities. Along with terpenes and other cannabinoids like THC, it induces a restorative head and body buzz that assists in the management of multiple conditions. Not to mention, at this level, its benefits are just as long-lasting and equally effective in aiding patients.

Producing a body-centric effects, Luca Brasi is best used against physical aches and pain regardless of the cause or intensity. It is particularly useful against common conditions like arthritis, backaches, joint pains, and fatigue. However, patients may also ease the chronic pain issues that come with multiple sclerosis and cancer. The natural alternative also comes with lesser side effects compared to opioid-based painkillers which can sometimes cause gastrointestinal pains.

Beyond the physical relief, the Indica-leaning bud also provides long sufferers of psychological distress with a reprieve. It manages symptoms of depression, anxiety, and depression by inducing a happy high that temporarily eliminates worries, stress, and cynicism. In its place, it instills an innate sense of calm that allows users to think clearly and stay positive. Similarly, it could be used to appease stress.

Luca Brasi is a short plant that is perfect for home growing. Indoors, it has no problem fitting into a dedicated tent or small-sized grow room. The controllable environment also allows growers to install beneficial life support equipment such as a small growing fan that will cast a light breeze among the batch and help it develop a sturdier frame. Changing out to 600-watt HID lights will also improve bud production per square meter.

It works best under the Sea of Green setup. This particular method is non-invasive, gently coaxing the colas toward the light while also improving light distribution in the lower nodes. As it enters the flowering period, growers may want to start pruning the plant. If left unattended, its dense foliage can harbor moisture in between its crevices that could lead to the development of humidity-related problems such as mold, mildew, bud and root rot.

Indoor
Luca Brasi has a flowering period of 7 to 9 weeks. It produces between 10 to 12 ounces of buds per square meter.

Outdoor
Growers from the northern hemisphere can expect Luca Brasi to flowers between the last week of September to the middle of October. Once ready for harvest, it yields at least 12 ounces of buds per plant.

Have you ever smoked or grown your own Luca Brasi? Please let me know what you think about this marijuana strain in the comments below.