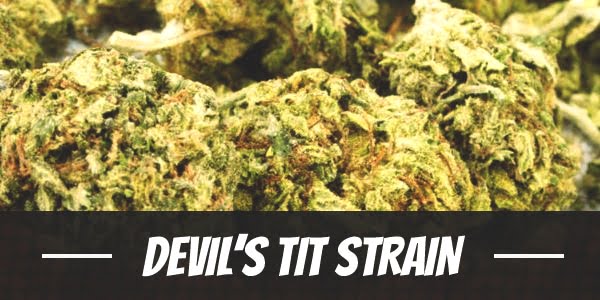 The foundation for Devil’s Tit lies on three industry names:

Durban Poison. Extremely potent, Durban Poison delivers an exhilarating euphoria that powers users throughout the day. It gets heart pumping with excitement and vigor like a hair-raising roller coaster ride.

Acapulco Gold. With its golden-looking coat of trichomes, Acapulco Gold mesmerizes enthusiasts. Its blend of sunrise yellow, lime green, and toffee brown captures the eye but what wins hearts over is its energizing high. Thus, though difficult to find, it is continuously sought after by enthusiasts.

Cinderella 99. Cindy is a brilliant strain with a potent cerebral head high. It stimulates not just the mind, but the senses as well with its sweet, fruit-flavored smoke. The plant itself is a standout too as it a high yielder.

Devil’s Tit, the amalgam, induces a stimulating head high and energizing body buzz that invigorates users thoroughly. It enhances the mood, instills an upbeat disposition, and sharpens the senses with its THC average of 18%. Despite its intensity, it rarely causes concern. At this level, too, it could mediate a user’s transition from beginner to experienced.

Not one to take its time, Devil’s Tit delivers a buzzing energy within minutes after the first few hits. It comes as a gentle euphoria that guides the mind away from the problems of life. Uplifting thoughts take over in its place.

The upbeat disposition is often accompanied by talkativeness and giggling fits, especially when used around like-minded friends. But it could also be used alone. The enhanced mood makes the day seem less daunting.

After about an hour or two, the initial rush of energy slows down into a tingling buzz that swarms the body. It plants itself in the limbs but does not weigh users down. However, it does induce a deep relaxation that takes away tension from the muscles, allowing one to move like a well-oiled machine.

No doubt, Devil’s Tit is best used in the morning. It has excellent wake and bake qualities that keep one awake and alert throughout the day while also upbeat. Using it at night could push back plans of a restful evening.

Devil’s Tit has an alluring sweetness that tantalizes the senses. Enhancing it are spicy notes of pepper with herbal undertones. Breaking the buds apart, as well as combusting it, opens the gateway to its lemony overtones.

Compared to its aroma, Devil’s Tit is sourer. Its lemon overtones are sharper, causing a bit of a cough for some users. A sweetness eventually takes over along with an herbal undertone. On the exhale, it leaves an aftertaste of spicy pepper.

One can expect the usual red, irritated eyes and cottonmouth from Devil’s Tit. Apart from the dry spell, there may be a chance of anxiety and paranoia depending on the dosage. As such, users should consume the strain in moderation.

In spite the fear that its moniker instills, Devil’s Tit is actually quite beneficial when used as a medicinal strain. The immense presence of its psychoactive compounds gives it significant therapeutic effects that help appease different afflictions. As such, patients may turn to it as a source of comfort during trying times.

Among its best uses is a stress reliever. It delivers an uplifting head high and relaxing body buzz that effectively invigorates users from head to toe. Feeling free from mental and physical fatigue, patients instantly feel a weight off their shoulders.

At the same time, it temporarily eliminates dread and pushes back worry in favor of a more upbeat disposition. Apart from uplifting the mood, it also stabilizes overwhelming and, sometimes turbulent, emotions such as hopelessness, loneliness, and despair. As such, it works well as an anti-depressant, anxiolytic, and anti-psychotic that helps manage psychological distress.

Its muscle-relaxing capabilities, on the other hand, relieve a wide variety of aches and pains all over the body. It works best against common conditions such as cramps, spasms, and arthritis as well as joint aches. Moreover, it comes with less side effects compared to synthetic medicine.

Devil’s Tit stands tall just like its parent. It is also quite branchy which makes it sturdy enough to carry the weight of its heavy buds. Apart from that, it also has excellent immunity against common pests and diseases.

Highly adaptive, it can adjust well to different types of environments including growing rooms, gardens, and farms. Growers may also sow it in both soil and soilless mediums like hydroponics. The former will improve terpene production, giving buds better flavors. Meanwhile, the latter creates ‘cleaner’ buds that are free of chemicals.

It pairs well with the Screen of Green method. The setup requires installing a screen above the plant then weaving the branches into the net to create an even canopy. This helps distribute light throughout the lower nodes as well as improve air circulation. It also keeps the plant to a manageable height and shortens the vegetative phase.

Interestingly, if one lowers the temperature, it produces a purple hue which contrasts perfectly from its lime green hue. Making the strain even more attractive is its thick coat of trichomes which look white from afar.

Devil’s Tit produces about 12 to 16 ounces of buds per square meter. Usually, the flowering time lasts up to 11 weeks but could finish as early as 9.

Flowers usually bloom around the middle of October to the early days of November. At harvest, growers can expect at least 16 ounces of buds per plant.

Have you ever smoked or grown your own Devil’s Tit? Please let me know what you think about this marijuana strain in the comments below.