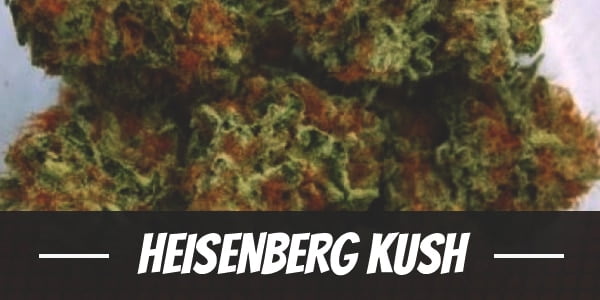 The Great Minds series by Alphakronik Genes celebrates various scientists that have made their impact in the world. One of which is Werner Karl Heisenberg, a pioneer in the field of quantum mechanics whose research led to the refinement of the quantum field theory and the advancement of nuclear and particle physics.

Like him, Heisenberg Kush is a brilliant strain. One can even say it is a ‘triple threat’ in terms of appearance, terpenes, and psychedelic effects. Its stunning deep blue and royal purple hues stun many in their tracks while its berry-scented buds entice users to light it up and take a hit. Once drawn in, the smoke completely transforms one’s day into one that is productively fun. An added bonus is it finishes faster than even most Indicas, hitting the flowering stage at only 6 weeks.

In honor of one of the most celebrated intellectuals, Alphakronik Genes crossed two of the finest strains in the cannabis industry – Blue Dream and Sin City Kush. The former influenced Heisenberg Kush’s cerebral focused high. Meanwhile, the therapeutic body buzz is an obvious inheritance from the latter.

Like a lightning bolt, Heisenberg Kush’s initial onset begin in an instant. After the first hit, an invigorating rush of euphoria swarms the mind and leaves enthusiasts beaming with happiness.

To casual users, the clearheaded high is a chance to get creative. After all, it encourages a free flow of thoughts that often ease the process of coming up with innovative solutions. For this reason, Heisenberg Kush is great for use hours before a brainstorming session or in the morning before work.

After an hour or two, a light pressure buzzes from behind the eyes signals the beginning of the hybrid’s Indica effects. It comes in waves and soothes each muscle as it ebbs down to the rest of the body. Though intense, it is neither overwhelming or sedating. Far from it, the tingling sensation only serves to relax the user so they may still perform physical tasks. And, with the rush of energy, users stay motivated to finish tasks and complete projects on time.

Of course, in excess, the strain’s mentally stimulating effects are counterproductive. Rather than leading users to profound ideas, its up to 23% THC heightens awareness and induces slight paranoia. As such, marijuana must always be toked in moderation.

Heisenburg Kush has a delicious aroma that brings together the scent of crushed blueberries, grapes, and sweet oranges. Broken apart or crushed, overtones of damp soil with notes of skunk fill the air.

Heisenberg boasts a tropical flavor with hints of coffee. It tastes of sweet berries, grapes, and strawberries with woody undertones. On the exhale, it leaves the cooling aftertaste of mint.

Though undeniably great, Heisenberg Kush is not a perfect strain. For one, it is always sure to cause a cottonmouth which, though mild, can be quite uncomfortable for some. To some degree, it may also dry the eyes or induce temporary dizziness. In such cases, it is best to rehydrate with a few glasses of water.

In extremely rare instances, using Heisenberg Kush can lead to slight paranoia or increased anxiety. Both symptoms often surface when too much of the bud is consumed. Although, individual tolerance can also be a factor. Regardless, marijuana should always be paced and moderated.

Heisenberg Kush’s energizing psychedelic effects is of great medical value to medical community. It brightens the day for users with depression and other mental illnesses like PTSD by temporarily appeasing its symptoms. The same stress-relieving abilities calm the mind of a person ridden with anxiety.

Apart from the behavioral, the strain’s soothing buzz also has physical benefits. For one, it gets rid of bodily fatigue that often affects users constantly bombarded by stress. Meanwhile, its anti-inflammatory and analgesic properties soothe inflammations in the muscles that often trigger the stinging pain of spasms.

Growing Heisenberg Kush is a little finicky. Apart from being a medical strain, its Sativa-leaning structure makes it a sensitive plant. For example, though it can withstand certain levels of heat, its stems and branches are weak against heavy moisture in the air and sudden gusts of wind.

For this reason, many growers prefer cultivating their strain indoors. Apart from keeping pests away, it allows users to adjust important factors such as lighting, humidity, and temperatures. However, its height necessitates early topping. In truly limited spaces, shortening the vegetative period will help manage its growth spurt.

Once it hits the flowering stage, lighting should be switched to a 12/12 cycle. Because its roots stretch out further than other strains, growers should prepare a larger pot with an extra gallon of soil. Lowering the temperature, on the other hand, will trigger its blue and purple colors instead of the usual green.

Growers may have to expose Kobain Kush’s seeds to germination techniques like presoaking though. Since they come in regular form, the likelihood of them producing at least half a batch of males is high. Alternatively, one may also plant more seeds to increase the chances of yielding calyx-filled plants. Applying Low-Stress Training techniques will keep females from turning into hermaphrodites.

Heisenberg Kush has an astonishing flowering period of 6 to 7 weeks. It produces at least 12 ounces of buds per square. However, employing the Sea of Green method significantly improves yields.

In the northern hemisphere, Heisenberg blossoms by the second to the last week of September with each plant yielding more than 16 ounces of buds per plant.

Have you ever smoked or grown your own Heisenberg Kush? Please let me know what you think about this marijuana strain in the comments below.