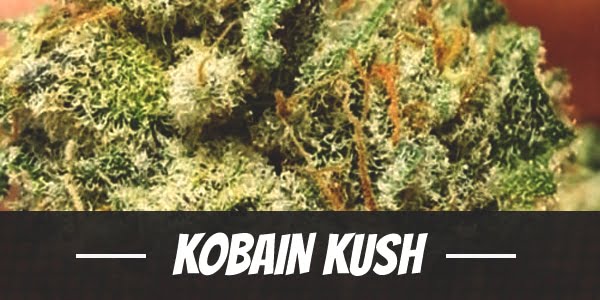 Pre-98 Bubba Kush is an excellent strain. It is a heavy-hitting Indica whose stress-crushing body buzz. either deliver a blast from the past or incapacitate users. In excess, of course. However, many aspiring home growers stray away from it due to its long flowering period of 10 weeks.

It was this problem that Red Eyed Genetics wanted to address by adding in White Lotus. After all, its quick flowering, impressive resin production, as well as thick coat of trichomes, is no secret in the cannabis industry.

By crossing the two, Red Eyed Genetics produced Kobain Kush – an Indica-leaning hybrid with the intense body effects of Pre-09 Bubba Kush but the outstanding growth profile of White Lotus. Moreover, the strain is equally potent. Its THC levels average at 24%. And, with a CBD of 2%, equally medically beneficial.

True to its Indica nature, Kobain Kush onset is slow and gradual. Most users do not feel its effects until they are fully enveloped in relaxation.

The soothing buzz, of course, begins in the temples. It eases worries inhabiting the mind as a sense of happiness wells. Snacks may have to be prepared ahead of time, though. Though subtle, the mental clarity does induce stimulate the appetite. It is also for this very same reason why many prefer using Kobain Kush before a meal.

Ebbing down to the rest of the body is a tingling sensation that releases tightness in the muscles. It plants a feeling of heaviness in the limbs that, eventually, cradles users off to dreamland.

Despite its sedating quality, the natural aphrodisiac continues to arouse some people. In excess, however, it can ruin a perfect night with a loved one. As such, users should toke the strain in moderation.

Kobain Kush has a surprising citric taste reminiscent of lime and lemon. Drawn in, it is sweet with notes of spicy pepper. On the exhale, it leaves a woody aftertaste of pine.

Regardless of the strain, marijuana always causes dehydration. It inhibits the production of moisture in both the tear ducts and the salivary glands. As such, users end up with red eyes and a cottonmouth. Seasoned users often ignore the symptoms due to their mildness. However, beginners may find the dry spell a little uncomfortable. In such cases, it is best to down a glass of water.

Though headaches, anxiety, and dizziness are commonly associated with Sativas, they can also be caused by Indica-leaning strains such as Kobain Kush.

Kobain Kush provides significant therapeutic value to the medical marijuana community. Its THC, as well as CBD and other cannabinoids, provide a reprieve against a myriad of afflictions including mental illnesses like depression and PTSD. Its happy high stabilizes the mood and enhances it. For this reason, it can also be used as a stress reliever.

Ironically, as much as Kobain Kush can induce a headache, it can also relieve it. After all, its analgesic effects begin from the temples. And, as it trickles down to the rest of the body, it soothes away various kinds of aches and pains that often keep patients awake.

Freed of mental and physical worry, the natural sleeping aid eventually helps those with insomnia fall into an unencumbered slumber.

Kobain Kush is a short, hardy plant that is great for home growing. It can withstand various problems caused by humidity such as mold and mildew. Moreover, its branches are sturdy enough to carry the weight of its heavy buds.

Because of its naturally short stature, Kobain Kush does not necessitate height management. However, it does require constant trimming. This is because its bushiness tends to interfere with the circulation of light and air. Moreover, pruning will allow nutrients to produce bigger, denser buds.

Once mature, it produces forest green nugs with yellow undertones that are quite lumpy. Placed in the palm of one’s hand, its density is obvious in its heaviness. Sparse bright orange hairs, as well as a silver coat of trichomes, cover it.

Kobain Kush flowers anywhere between 7 to 9 weeks with each square meter yielding 10 to 12 ounces of buds.

In a well-aerated garden, Kobain Kush blossoms from the last week of September to the second or third week of October. Once mature, it produces more than 12 ounces of buds per plant.

Have you ever smoked or grown your own Kobain Kush? Please let me know what you think about this marijuana strain in the comments below.