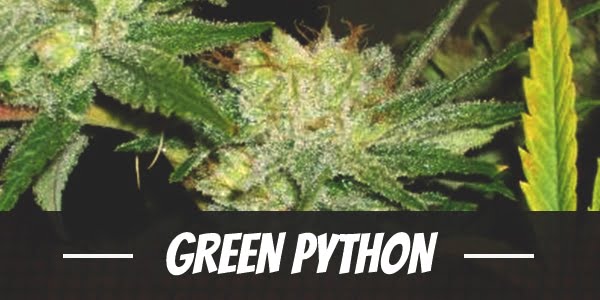 Unlike the snake it’s named after, Green Python is neither dangerous nor frightening. Its THC values, however, are quite intimidating especially because they range between 15% to 22%.

At that level, it can easily debilitate even the most seasoned of users especially when used outside of one’s limits. In moderation, though, the friendly Indica-leaning hybrid eases users into a relaxed state with its stress-crushing body high.

It was developed by House of Funk Genetics using Burmese Kush with a select Green Crack clone. The former is an Indica-leaning strain that envelops users in a sense of calm while the latter is a pure Sativa that invigorates the mind.

While Green Python is abundant with THC, it also contains an ample amount of CBD. This, in turn, allows it to mitigate symptoms of various ailments. For this reason, its appeal extends to the medical marijuana community as well.

Often, Indica-leaning strains are slow to set and Green Python is no exception to that rule. Typically, it takes more than a few puffs for its psychedelic traits to take effect. But, when they do, it often begins with a subtle rush of euphoria that intensifies with each toke. Once it swarms the mind, it leaves users smiling out of contentment and happiness.

Gradually, a tingling sensation begins to build in the temples. Its prominent Indica effects manifest as it soothes the muscles in its path. In its place is a calming yet sedating heaviness that allows people to fully relax. Eventually, users become drowsy and fall into a deep slumber.

Although, such effects are not as rose-colored when one overconsumes the strain. Instead of capping the day off, many are unable to completely relax at night while stuck to their couches. As such, marijuana must always be used in moderation.

The influence of Burmese Kush is clear in Green Python’s strong overtones of Kush. Broken apart and combusted, it releases spicy notes of pepper blended with subtle hints of wet soil.

Carrying over to Green Python’s flavor is its spicy herbal undertones. Drawn in, its thick smoke fills the palate with the taste of pepper. Surprisingly, the exhale leaves a woody aftertaste accented by a faint sweetness.

There is a slight chance that Green Python may cause temporary dizziness. This is often the result of low tolerance to THC or consuming too much of the bud in a short amount of time. As such, marijuana should always be paced and used in moderate amounts.

As with all strains, Green Python also comes with its fair share of dehydration. Its symptoms often lead to a cottonmouth. But, with cannabinoids interfering with the production of moisture in the tear ducts, users also likely end up with dry eyes. For this reason, it is best to hydrate before, during, and after smoking the bud.

At up to 2%, Green Python’s CBD levels are already higher than most strains in the cannabis industry. And, through its combined efforts with THC and other chemicals like cannabinoids, it provides a reprieve against a variety of afflictions. Not surprisingly, the Indica-leaning variety’s medical benefits are concentrated on the body.

THC, being a natural painkiller, soothes away various aches beginning at the temples. In fact, some users use the bud to temporarily appease symptoms of glaucoma such as pressure from behind the eyes. It can also be used to reduce the sharp sting of muscle spasms. Meanwhile, its sedating properties work well against insomnia.

One of the best times to use Green Python is actually right before a meal. Its subtle stimulating properties encourage a hearty appetite that make it perfect for those with anorexia and other similar food-related disorders. At the same time, it can also be the perfect companion for cancer patients who have lost their appetite due to the intense side effects of chemotherapy.

House of Funk Genetics gifted the world with a truly exceptional strain. Not only is Green Python short, it is also sturdy too. Neither sudden changes in temperature nor bursts of wind faze it. Moreover, it grows well regardless of one’s set up or skill level. For this reason, it is perfect for beginners with truly limited spaces.

Green Python tends to get bushy though. When left unattended, it can hamper its own growth. As such, aspiring growers should trim and prune their plants for any leaves, branches, or bud sites that are dying off due to lack of sunlight. This will redirect nutrients’ attention to healthier parts.

At the moment, the Indica-leaning hybrid’s seeds are only available in regular form. Because the number of females is not assured, growers may germinate more seeds to increase the chances of yielding a resin producing plant. Meanwhile, applying Low-Stress Training methods will keep successful females from turning into hermaphrodites once it hits the flowering stage.

It takes between 8 to 9 weeks for Green Python to finish flowering. It yields are remarkable for its short stature, producing anywhere from 24 to 32 ounces of buds per square meter.

Green Python thrives in a well-aerated garden and produces more than 32 ounces of buds per plant by the second or third week of September. Although, depending on the weather, the flowering period may extend up the first week of October.

Have you ever smoked or grown your own Green Python? Please let me know what you think about this marijuana strain in the comments below.