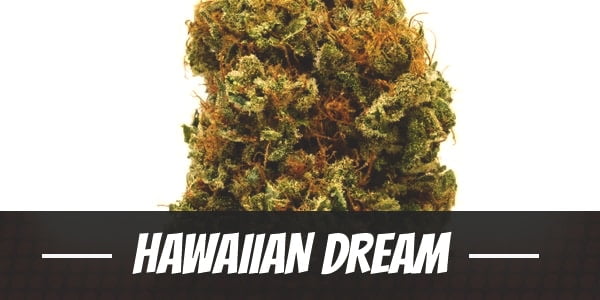 Thinking of Hawaii always conjures ideas of rest and relaxation. This is not surprising as being in the island does provide such a luxury in today’s fast-paced world. Thankfully, enthusiasts need not spend a fortune on plane tickets especially now that a bud like ‘Hawaiian Dream’ has hit the market.

Creating such a singular strain was not a difficult task. With so many options out in the cannabis industry today, Moani Naturals chose and crossed two Sativa-leaning mainstays – Blue Dream and Hawaiian. The latter is a tropical smoke that takes users on a vacation almost immediately after the first hit. Meanwhile, the former invigorates the mind with its cerebral focused high.

Hawaiian Dream is unique in itself. For one, it is a pure Sativa among an industry of hybrids. But, more importantly, it has higher levels of CBD than THC. When smoked, it induces a subtle psychedelic buzz that is beneficial both recreationally and medically.

Though created for medical purposes, Hawaiian Dream retains enough THC to be of recreational value to the rest of the cannabis community. Some seasoned users accustomed to incredibly potent strains, however, may not feel the cerebral buzz. When, in reality, the Sativa does induce a subtle psychedelic high – one that less experienced users are likely to enjoy.

The initial onset begins with a gradual rush of euphoria to the brain. It leaves users beaming with happiness especially as the uplifting buzz spreads to the deepest recesses of the mind. However, the clearheaded high also encourages a heightened level of focus.

In most cases, a light buzzing pressure ebbs down from the temples. It relaxes the muscles and may sometimes make the limbs seemingly heavier. Although, none of the numbing or sedating effects locks users to the couch.

Due to its mildness, Hawaiian Dream can be used any time of the day. Its best use though is in the morning as a great wake-and-bake strain.

As its name suggests, Hawaiian Dream is both tropical and citric with strong notes of orange. Once broken apart and combusted, its sweet floral notes and undertones of damp soil permeate in the air.

In the palate, Hawaiian Dream bursts in a myriad of tropical flavors such as oranges, grapefruits, and pineapples. On the exhale, its sweetness is matched by an equally powerful citric tanginess.

Cannabinoids often interfere with the production of moisture. The symptoms are especially obvious in areas such as the eyes and the mouth. Thankfully, both are mild and often never cause trouble. However, beginners may find the dry spell a little uncomfortable. In such cases, it is best to down a glass of water to rehydrate.

At times, Hawaiian Dream may also temporarily cause a slight dizziness which may lead to a headache. Worst, it can heighten awareness and trigger anxiety. All three, of course, are the result of consuming too much of the strain. For this reason, marijuana should always be paced and used in moderation.

Due to its high levels of CBD (6% to 12%) a, Hawaiian Dream provides a reprieve against a plethora of mental and physical affliction.
Though subtle, its happy high temporarily relieves stress and anxiety. According to a 2018 study by the Washington State University, strains with low THC and high CBD are effective at easing stress-induced depression and its symptoms.

Apart from that, Hawaiian Dream also works as an analgesic that soothes away pain beginning from the temples. It helps appease the sharp sting of both spasms and cramps. Meanwhile, its anti-inflammatory properties reduce pain and swelling.

Though Hawaiian Dream is 100% Sativa, it is not at all weak. Its stalks, as well as branches, are sturdy and can withstand various problems caused by heat and humidity. And while it prefers warm temperatures, it does not mind being cultivated in colder weather.

Most commercial growers, however, prefer growing their strain in a controlled environment where factors such as lighting, humidity, and temperatures are easily adjusted to mimic Mediterranean climates. Indoor growing spaces also offer extra protection against pests and extreme weather.

With that said, using organic mediums like soil will help the plant reach its fullest potential as well as enhance its flavor. Hawaiian Dream’s height may necessitate early topping though. Otherwise, it can outgrow the space. Trimming and pruning will also help redirect nutrients to healthier parts of the plant.

Like other pure Sativas, Hawaiian Dream takes its sweet time during the flowering stage. However, the 10 to 12-week wait is rewarded by more than 12 ounces of beautiful buds per square meter.

Hawaiian Dream thrives in a well-aerated garden under loads of sunshine. However, in areas where summers are generally short such as those in the northern hemisphere, the herb blossoms late – usually around the last week of October to mid-November with each plant yielding more than 16 ounces of buds.

Have you ever smoked or grown your own Hawaiian Dream? Please let me know what you think about this marijuana strain in the comments below.