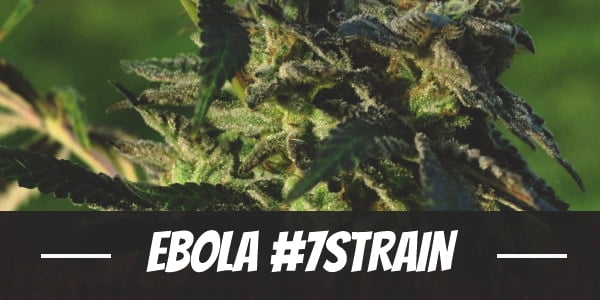 Ebola is a terrifying disease that can wreak havoc on those infected by it. Luckily, in the cannabis industry, the ‘Ebola’ (#7) does not come close to the fatal fever. Rather, it is an Indica-leaning hybrid that induces a cerebral psychedelic effect and a totally relaxing body buzz. When used in excess, however, it can debilitate even those with a lifetime’s worth of experience

Ebola #7 is a standout strain from the clone-only cannabis company HendRX Farms that first came out in the summer of 2012. It came about as a result of combining two Cali classics. First, Girl Scout Cookies was chosen for its incredibly balanced effects. And, second, for immaculate flavors, the breeder looked no further than SFV OG. Their offspring sprouted various phenotypes but it was the plant numbered 7 that showed the best qualities.

But, why name a strain after a life-threatening disease? Well, it earned the nickname ‘THCbola Virus’ after it spread like a virus – replicating itself quickly – across Humboldt County. Its equally powerful too, boasting an average THC of 24% to 28% with some of its better batches testing up to 31.7%

Though only 25% Sativa, Ebola #7 delivers a mind-blowing cerebral buzz. It acts quick too, a trait passed on by its SFV OG Kush parent. Its cerebral focused onset begins with a jolt of energy that leaves users feeling a strong need to share their stories after fun-filled memories resurface. Naturally shy people may even find themselves getting a little chatty.

As the clearheaded high continues to stimulate the mind, it sparks one’s sense of creativity. The free flow of thoughts may result in a jumble for some, but those who have work ahead of them may find the profound ideas and innovative solutions useful during a brainstorming session. This is also why many use Ebola #7 mid-morning or in the early afternoon.

Complementing the mental clarity is an uplifting buzz. Though subtle at first, it intensifies with each toke until, finally, it reinvigorates the body through and through. Although, as the long-lasting high wears off, users may find themselves deeply asleep.

Fragrance-wise, Ebola #7 lies on the pungent side. A single whiff reveals the woody scent of pine as well as undertones of damp soil. Broken apart, the sweet and spicy herbs permeate in the air.

Ebola #7’s smell is remarkably similar to its taste. Drawing in its smoke brings in its sweet and earthy to the palate. On the exhale, it leaves an aftertaste of pine.

Ebola #7 comes with bouts of dryness that often affect both the eyes and the mouth. Though mild, the symptoms can be quite uncomfortable especially for beginners. In such cases, it is best to hydrate with water.

In large doses, Ebola #7 can trigger anxiety in people prone to it. Some may even find themselves feeling slightly paranoid due to the keen awareness. As such, marijuana must always be paced and used conservatively.

First and foremost, Ebola #7 is an excellent stress buster. Its psychedelic high clears the mind of worry and anxiety. In fact, negative perspectives may take a turn for the better. For this reason, it is an excellent mood enhancer that helps users cope with depression and other mental illnesses like PTSD.

Equally beneficial is its body buzz which soothes away various kinds of aches beginning from the temples. A powerful painkiller, Ebola #7 has the ability to reduce intraocular pressure – a symptom of the eyesight robbing disease, glaucoma.

After about an hour or two, the strain’s sedating properties begin to take over. In relaxing the user for hours, Ebola #7 creates the perfect state of mind to prepare users for a deep, unencumbered slumber. For this reason, many use it as a natural sleeping aid.

Ebola #7 is sold in various dispensaries. There is only one catch though. It requires the care of an expert as HendRX Farms has only made its clones available. For this reason, the Indica-leaning hybrid is mainly grown indoors.

Cultivating a clone comes with advantages of its own. For instance, it assures users of stability with regard to genetics as it is an original cut from the ‘motherplant.’ Though it roots faster during the vegetative phase, aspiring growers may opt for a quick-flowering plant by choosing a clone taken from a mature female. As such, some can be harvested in only 2 to 3 weeks.

Though it performs well inside, the great outdoors is arguably the best place for the sun-loving plant to thrive. As an Indica-leaning strain, Ebola #7 does not necessitate early topping. However, it may require constant pruning and trimming to improve air circulation. Doing so will also help light reach the lower bud sites and branches. It also reacts well to the Sea of Green method for growers looking to increase their yields.

Ebola #7 has an indoor flowering period of 7 to 9 weeks. Typically, each square meter yields anywhere between 10 to 12 ounces of buds. Although, in the hands of a seasoned grower, it can produce even better yields.

In the gardens of Humboldt County, Ebola #7 blossoms up to the second or third week of October. A testament to its great grow, the strain produces more than 12 ounces of buds per plant.

Have you ever smoked or grown your own Ebola #7? Please let me know what you think about this marijuana strain in the comments below.