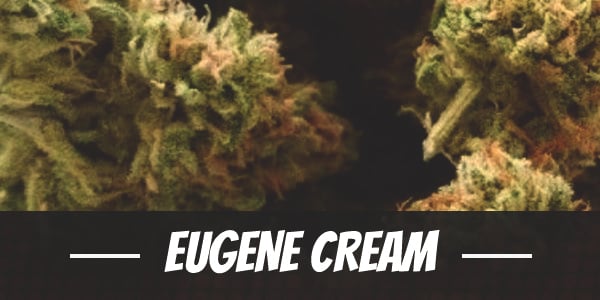 Eugene Cream took its name from the city where it was bred in 2008. In creating it, the breeder Drift Away Farms first crossed Hash Plant and Big Bud. The male offspring of these two Indica plants, then, was used to pollinate a female Queen.

Amidst the deluge of insanely potent hybrids, Eugene Cream takes a step back by offering a less intense experience. It suits people with varying experience levels including beginners. A mostly Indica plant, its effects are expectedly physically relaxing. Although unlikely to devastate users, it should also not be used excessively.

It takes time for the effects of Eugene Cream to manifest. In fact, it could take a few minutes after taking a hit before it even starts inducing a euphoric cerebral high. Also, its being a slow starter is one of the reasons why it is ideal for first-time users.

As the mental stimulation wears on, it releases the creative juices. For some people, it could result in random flip-flopping of ideas. At the same time, individuals could also take advantage by using it for brainstorming activities.

Following the mental high, Eugene Cream starts to make its way to the body. It delivers a soothing sensation that puts muscles at ease. And, it does so without causing any sedation. Even as it puts people in a state of bliss, it is unlikely to cripple one on the couch.

For most people, the relaxing qualities of this strain is conducive to feeling sleepy. As such, it is best used at the end of the day, or in the evening. It may not be a debilitating strain, but that is dependent on dosage and tolerance. Using it during the day, and if one were to overindulge, it could be counterproductive in that it could make users feel lazy.

The fragrance of Eugene Cream, like its effects, is wonderful. It emits an earthy odor that comes with a sweet and citrusy blend with a sharp note of cheese.

Apart from naming it after the city where it originated from, it also describes perfectly how it taste. With its fragrance carrying over, its smoke takes on a creamy quality to go along with a sweet and citrusy aftertaste.

Eugene Cream use almost always causes cottonmouth. It could also cause bloodshot eyes. Although not dangerous at all, these symptoms could be uncomfortable. One way to alleviate is to keep hydrated. Unfortunately, feeling the throat dry is unavoidable as it is the result of THC binding with the cannabinoids in the mouth that causes such condition.

Furthermore, some people who are susceptible to anxiety may also feel more anxious after using Eugene Cream. It is therefore best to try it out using only a small dosage to stay on the conservative side.

Eugene Cream’s use brings about many benefits. The THC it possesses has immense therapeutic benefits. For one, it has exceptional painkilling properties. Many people use it to find a reprieve from pains and aches cause by chronic ailments.

The psychedelic high it induces can uplift the mood of users. Hence, it is not only medical users, but even those people who use it for leisure could benefit from its stress-busting ability. Moreover, it can also be used to help users cope with depression.

One benefit of the psychoactive compound of Eugene Cream is in inducing hunger pangs. For instance, medical patients who undergo appetite-disrupting treatment could use it to improve food intake.

After an hour or two of pure relaxation, not only has the strain helped eased people from a tiring day but it also promotes quality sleep.

Eugene Cream is not a tall plant. And, that makes it easy for growers to fit it into tight grow rooms. Its bushy nature though means that the plant requires regular pruning and trimming. It could be susceptible to molds and diseases. As such, proper air ventilation, as well as strict monitoring of temperature and humidity, is important.

In the outdoors, the plant is well adapted to the climate of Oregon, Portland. It could grow in a cool environment as well as in a warm climate. In a sense, this ability to tolerate the weather could very well be due to the Afghani lineage that runs in its genes.

Unfortunately, getting ahold of the seeds is not as simple as purchasing from a seed bank. At present, Drift Away Farm has chosen to keep it proprietary.

Once the flowering cycle is triggered, it takes Eugene Cream approximately 8 weeks before it is ready for harvest. A typical yield per square meter is around 10 to 12 ounces.

The harvest time usually falls on the last week of September to the first week of October. Each plant could produce at least 12 ounces of flowers under expert hands.

Have you ever smoked or grown your own Eugene Cream? Please let me know what you think about this marijuana strain in the comments below.