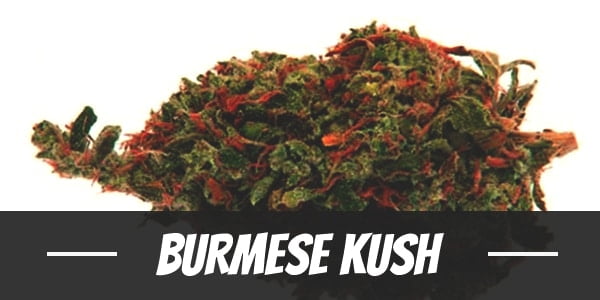 There are currently thousands of strains in the market today and hundreds are most likely added to that long list every now and then. Hence, it is almost impossible to track all of them and differentiate one from the other. However, there are certain strains that particularly make a mark due to certain reasons.

Having said that, most connoisseurs look into a strain’s lineage, strength and type of high, and cultivation information to decide on its overall quality. Hence, there are those that easily win the hearts of every cannabis fanatic and there are those that just do not make the cut.

Fortunately for this one strain called the Burmese Kush, it appears that the majority of the cannabis community have recognized and appreciated its potential. Although the strain has a partly shady lineage, its other parent, however, is a widely respected strain and Burmese Kush itself is just impressive on its own. Simply put, Burmese Kush has more than enough to offer than just a shady history.

On that note, below is a detailed information about Burmese Kush’s overall profile to give prospective users an idea of what to expect from this well-balanced hybrid.

Burmese Kush was initially bred to accurately express the mind and body buzz of both Sativa and Indica strains. The breeder responsible for its creation is the TH Seeds. The strain was created in The Netherlands where it is commonly referred to as Buku, for short, especially in Amsterdam coffee shops.

Buku is a cross between the popular medical marijuana OG Kush and an original Indica from Burma with an unknown genetic origin. Despite its rather vague lineage, Buku is actually an award-winning strain that was included in the HighTimes Top Ten Strains of 2007.

Burmese Kush is known to be a creeper. The effect comes on slow, but once it settles in, users will feel a strong and lasting high that typically starts as a happy yet calming euphoric sensation that uplifts mood and induces laughter while improving focus and stimulating creative thoughts.

Later into the high, users will notice a deep sense of relaxation that may cause users to feel lazy and sleepy. This body buzz can easily overwhelm users, so for that reason, it is always best to smoke Burmese Kush at night regardless if it is intended for recreational or medical use.

Although Burmese Kush delivers an outstanding cerebral and physical high, it is not necessarily too overpowering for beginners. Nonetheless, extra caution is always recommended and overindulging in the strain is never advised.

Given its kush ancestry, Burmese Kush smells like so with a few hints of berry aroma. To be more specific, the strain gives off a woody and earthy fragrance accented by sweet notes of berry. This combination makes the strain an appealing treat for both novice and seasoned users.

To complement its well-balanced high, the flavors of Burmese Kush does not overpower users with strong sensations. To wit, the strain offers a delightful combination of the sweetness of lemon, berry, and grapefruit with an herbal and pine undertones and a tad of spiciness.

When burned, the smoke of Burmese Kush is smooth and reminds one of the sweetness of candy with a tinge of pine and ginger. Overall its flavors are just as perfectly balanced as the strain’s high.

Users of Burmese Kush will most likely experience drying of the eyes that is often accompanied by signs of dry mouth. Although these are rather manageable, prospective users should still consider the possibility of the strain causing headaches, paranoia, and dizziness.

Although the last three conditions rarely manifest, they can still be a cause for concern especially when a user tends to overindulge in the strain.

Given its OG Kush parent, it is no surprise that Burmese Kush is also proven to be a valuable medicinal alternative for various health conditions.

To wit, the strain is widely recognized for the effective alleviation it brings to patients with depression and those dealing with stress. Consequently, the strain is also capable of providing temporary yet efficient relief to pain due to injury or illness such as muscle spasms.

Furthermore, Burmese Kush is also reportedly known to help control nausea and stimulate cravings for patients with eating disorders or those that simply lost their appetite due to certain medical conditions.

Unfortunately, Burmese Kush is not the easiest strain to cultivate as it requires a lot of attention from the grower. Nonetheless, being a hybrid as it is, the strain can be cultivated either indoor or outdoor. Note that for indoor cultivation, SOG method is the most frequently utilized method.

Outdoors, the strain can thrive in sunny climates. Although, prospective growers are advised to plant the strain in a sheltered spot. Also, keep in mind that Burmese Kush is quite susceptible to mold and mildew when its growing environment gets too warm and humid.

Indoors, Burmese Kush’s flowering time should take 60 to 65 days. Given sufficient attention and care, the strain can produce an indoor yield of about 12 to 14 ounces per square meter.

If cultivated outdoors in its ideal growing condition, the nugs of Burmese Kush should be ready for harvest by late September. Consequently, the strain should be able to produce a yield of about 14 ounces or more plant.

Have you ever smoked or grown your own Burmese Kush? Please let me know what you think about this marijuana strain in the comments below.