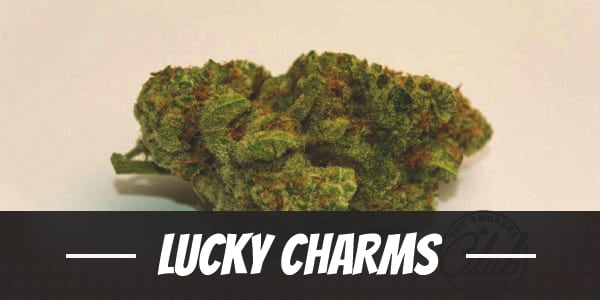 Named after a children’s favorite breakfast cereal, Lucky Charms is a strain that exudes a fruity scent. This balanced hybrid is excellent at jumpstarting a person’s day whether at work or home similar to having a full breakfast.

Lucky Charms was developed by Bodhi Seeds, the same breeder that created Sunshine Dream and Tiger’s Milk to name a few. It traces its genetics to The While and Appalachia.

The White, itself has a vague origin. But what it does exceptionally well is providing a balanced head and body high. Unfortunately, its aroma is not at all impressive.

Meanwhile, the other strain used by Bodhi Seeds, Appalachia does come with a delightful flavor, the same trait passed on to Lucky Charms. Like the White, it also delivers balanced effects, but it tends to be dreamier instead of sharper senses.

In combining the genetics of the two parent strains, the result is a hybrid that boasts of thick frost-white trichomes. As one can imagine, Lucky Charms is a very potent strain.

Lucky Charms is versatile in the sense that its effects vary depending on consumption. At up to 22% THC, its psychoactive properties can take users to the edge. New cannabis users are advised to use a milder strain. Experienced users, on the other hand, also tend to use too much the first time. That is because it is a creeper and will take several minutes before manifesting. As such, some people end up underestimating its potency.

Used in a minimal amount, Lucky Charms starts by inducing a warm euphoric cerebral high. An overwhelming sense of upliftment enhanced the mood leaving users feeling happy. Soon, this is followed by a tingling sensation in the body as the physical effects kick in. In most cases, the body relaxation induced by the strain is not going to become a hindrance to productivity. Thus, one can see that used in this manner, Lucky Charms is an excellent bake-and-wake cannabis.

Depending on the individual tolerance level, some people even if using only a small amount may find the effects more intense than usual. Often, though, it is the result of consuming too much. In this case, the buzzing high provokes a racy mind where thoughts come and go rapidly. In some instances, it may also lead to visual and auditory distortions. Once the Indica traits creep into the body, it leaves users in deep relaxation and lost in their thoughts.

People who do have a few more things to do before calling it a day would want to use a tad bit more of Lucky Charms.

Lucky Charms has a floral scent with a hint of berries. After breaking the bud, its musty and piney smell becomes more prominent. A faint citrusy note lingers upon exhaling. As if reminding users of its potency, the smoke is a little harsh and may cause some coughing.

Lucky Charms has a scent that is enticing but so does its flavors. Much of its fragrance carries over, but the fruity taste that is reminiscent of berry-flavored breakfast cereal makes it a delight. However, due to the harshness of its smoke, some people may elect to use ice bongs to make it smoother and comfortable on the throat.

As expected, using Lucky Charms comes with adverse effects. Although these conditions are mild and often ignored by users, it can be a little bit more pronounced as users smoke more.

Whichever way one chooses to use the strain, users cannot escape the odds of experiencing “cottonmouth.” The dryness and stickiness can be felt in the throat, lips, and corners of the mouth. When smoked like a rolled cigarette, the harsh fumes can irritate the throat and eyes leading to coughing, dry eyes or watery eyes.

Brief paranoia can also occur, but the chances are meager. Having a mild headache is another condition that may arise.

Lucky Charms is a perfect companion to combat mental stress and fatigue. It can also serve as an efficient outlet for those who suffer from depression. That is because of the mood-enhancing properties and its uncanny ability to make people feel happy or euphoric.

The Indica traits of the strain come with analgesic and sedative-like properties. It soothes aching muscles resulting in body relaxation. Furthermore, it can also lessen the symptoms of chronic pains.

During the comedown, users already feeling relaxed are likely to fall asleep. It is particularly useful to anyone with trouble sleeping.

Finally, most users also feel hungry, but depending on usage, some either get up and eat something or ignore the hunger pangs and sleep. For those who find themselves in dreamland, expect to wake up starving. Thus, medical cannabis users needing to stimulate their appetite may also try this strain.

Released by Bodhi Seeds in limited quantity, it is difficult to get ahold of the seeds. At any rate, growers who do can choose to cultivate it indoors or outdoors. Either way, the plant thrives well. It is also quite tolerant of mistakes making it an ideal strain for beginners in growing cannabis.

Lucky Charms will need around nine weeks before it is ready for flowering. Once it does, it does not take long before growers harvest some 10 to 12 ounces of buds per square meter.

In areas where cultivating cannabis outdoors is legal, the ideal environment should be one that is similar to the Mediterranean. Under the regular care and nurturing of loving growers, Lucky Charms should transition to its bloom stage between the second and third week of October. Each plant is also able to produce at least 12 ounces of buds.

Have you ever smoked or grown your own Lucky Charms? Please let me know what you think about this marijuana strain in the comments below.