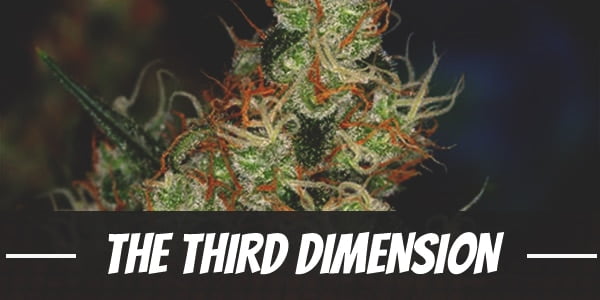 Let’s face it. Life is sometimes stressful. That is why there are moments when people feel the need to escape from reality. Of course, that is not to say that these individuals are evading responsibilities. Instead, it is more like taking a break and get back on track. One such strain that can do just that is the Third Dimension.

Information about The Third Dimension:

All breeders have one aim when crossing different types of cannabis, and that is to come up with a better hybrid. A common practice of many is to take their best strain and pair it with an exceptional breed. Through careful selection as well as having the expertise, TGA Subcool Seeds developed the Third Dimension, a hybrid that takes users to a hidden realm of wonders. Arguably, too, one can say it is an improved version of its predecessors.

To understand the genetic lineage of the Third Dimension, one has to look back at Jack Herer. Created by Sensi Seeds, the strain first made its appearance back in the early 90s. Several Dutch pharmacies also sold it as a medical-grade hybrid in Amsterdam.

Using Jack Herer, TGA Subcool Seeds paired it with The Cleaner to create Jacks Cleaner. Unfortunately, the offspring is clone-only. So, the breeder then used a prolific strain called Space Queen to recreate Jacks Cleaner into one that can produce seeds. They named the new hybrid Jack the Ripper.

Soon after its release, it did not take long for Jack the Ripper to gain worldwide prominence. It provides an intense, mind-bending cerebral experience that appeals to experienced users. When it was time to develop a new hybrid, TGA Subcool Seeds decided to find another strain to pair with Jack the Ripper.

After what must have been quite an extensive selection process, they settled on Apollo 13. An interesting thing about this strain is that one of its parent strains is a phenotype of Jack Herer.

Through a process of cross-breeding, TGA Subcool Seeds finally released the Third Dimension – a cross between Jack the Ripper and Apollo 13. Staying true to its lineage, users can expect an out-of-this-world cerebral experience.

Information about The Third Dimension:

Recreational users can enjoy the Third Dimension in two ways. Using only a small amount, it brings on an uplifting buzzing high that induces users to feel happy and elated. In the company of other people, users tend to feel more sociable. The strain also delivers an energetic boost that keeps users invigorated and motivated. In most cases, too, it unlocks creativity and promotes mental clarity.

The Third Dimension is a potent strain, but that is also true with many others. However, where it distinguishes itself is in the type of psychoactive properties it induces. People with low tolerance (especially beginners) may find the cerebral effects too intense. Not that it is a bad thing as some people do use a little more of the strain to induce near-psychedelic effects. In some instances, it can be disorienting, but most of the time, the experience is more visually stimulating while losing one’s self in a dreamy realm.

The choice of using Apollo 13 hits the spot when it comes to fragrance. The Third Dimension emits a pungent odor with a strong note of lemon and pine.

Though it is a bit odd, the mix of the earth and chemical with a note of citrus is pleasant enough for most people.

Using the Third Dimension, users can expect to experience dry mouth and possibly dry eyes. One thing to note, though, is that it may cause some people to feel anxious. For this reason, novice users may want to choose a milder hybrid. Also, people who are already having anxiety issues will want to avoid this strain.

In essence, the Third Dimension provides two primary benefits to medical cannabis users. Despite not possessing high CBD, it remains useful for people who need stress-relief. As a mood-enhancer, the strain not only wipes out stress but also allow people with depression to manage their condition.

While it leans to its Sativa side, the Third Dimension still has enough Indica traits to induce body relaxation. One other thing it does is to provide comfort to people with illnesses. It does so by reducing or sometimes eliminating chronic pains and aches.

The Third Dimension thrives indoors and outdoors. It is not difficult to cultivate, and most beginners should be able to care for it until harvest time.

Although its effects lean toward Sativa, the Third Dimension has more of the Indica structure. It also has a quick flowering period that falls between 6 to 8 weeks. During harvest, growers are likely to pick some 10 to 12 ounces of buds per square meter.

In a warm environment, the plant should start flowering between the second and third week of September. Growers can likely harvest at least 12 ounces of buds per plant.

Have you ever smoked or grown your own The Third Dimension? Please let me know what you think about this marijuana strain in the comments below.

0 comments on “The Third Dimension Strain”