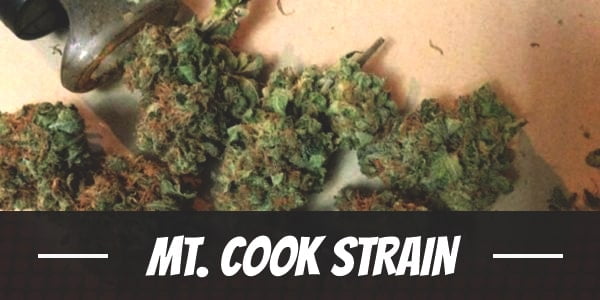 Mt. Cook is among the many prides and joys of New Zealand. It is the highest mountain and has inspired various people in the country, including breeders from Kiwiseeds.

In developing the strain, the breeders wanted to embody use the best of the best. And, what better way than the pure Afghani Indica? It passed on its sturdy structure as well as its sweetly relaxing buzz. Meanwhile, the addition of Northern Lights and Hash Plant provided the strain with an enhanced mind buzz as well as a delicious distinct profile.

The chemical taste and smell of the strain may dismay many. However, once drawn in, Mt. Cook delivers a relaxing yet mentally stimulating high that change the opinion of users. Moreover, the bud has an impressive THC level averaging at 22% to 23% as well as a CBD content of up 2% to 4% which provides it with significant therapeutic value. Its potency is well recognized, that is even took home that the award for Best Indica during the 2008 High Times Cannabis Cup.

Mt. Cook is a great strain to use after a long day at work. Not only because it has a tranquilizing high, but because it reinvigorates the mind during the onset through a rush of euphoria. It leaves users feeling happy as a behavioral change presents itself once the initial effects have settled.

For casual users, the mental clarity is a welcome gift. It transforms the monotonous workplace into a vibrant four-walled source of creativity. And, as it inspires a renewed sense of motivation, one works for hours at a time with complete focus without feeling tired.

After about an hour or two, a light pressure travels down from the temples to the rest of the body. It is an uplifting buzz that soothes users by untying knots in the muscles, removing, tension, and easing tightness. The waves of relaxation blanket users through and through but is not at all incapacitating. As such, Mt. Cook is one of the best Indica-dominant strains to use during the day.

For some, the freedom from mental and physical inhibition is highly arousing. While Mt. Cookies is among the best Indica-dominant strains to use in the day, it is also a great bedtime companion to a lovely night of passion ahead.

Mt. Cook has a pungent ammonia and diesel smell that immediately can sometimes be too off putting for some users. In spite of this, it remains a top choice among chemical strain lovers. Broken apart and combusted, it releases an herbal spiciness that fills the room.

Drawn in, Mt. Cook swarms the palate with the taste of sour diesel and sharp ammonia. Its acrid smoke, as it travels to the lungs, can induce a coughing fit or leave one with a bout an itchy throat. On the exhale, it leaves an herbal aftertaste sprinkled with spices.

Mt. Cook, like all other strains, has moisture-inhibiting cannabinoids that interfere with the production of saliva. As such, it is not uncommon for users to experience a cottonmouth that is usually accompanied by dry eyes. Drinking a glass of cold water usually provides instant relief to users. However, one still needs to stay hydrated throughout the day as the discomfort lasts for hours.

Though rare, users may also green out while using Mt. Cook. It is a condition characterized by dizziness, headaches, and anxiety. At times, the effects can develop into a subtle feeling of paranoia especially when exacerbated by alcohol. As such, it is best to refrain from over consuming the strain.

Mt. Cook, without a doubt, is a therapeutically valuable strains. It has a CBD content of 2% to 4%, higher than most recreational strains in the market. At that level, it works effectively against various types of aches and pains beginning from the temples.

Among its best users is, in fact, as an anti-inflammatory agent. It reduces swelling, appeases redness, and relaxes the area surrounding the inflammation. In a similar manner, it reduces spasms in the muscles as well as cramps in the stomach which can sometimes contract involuntarily. When it reaches the stomach, the same psychoactive compound also encourages a hearty appetite.

Although Mt. Cook is predominantly Indica, it has potent properties that address various mental afflictions. Its calming euphoria, for example, temporarily manages symptoms of depression such as an overwhelming anxious or dreadful thoughts. This is also present in people experiencing chronic stress and, as such, the strain makes for a great stress reliever.

A great beginner’s strain, Mt. Cook is easy to grow because of its hardy Indica structure. Its stalks and branches are thick and can withstand various unpredictable factors such as strong gusts of wind, fluctuations in temperature, and changes in weather. Moreover, it does need a lot of space to grow as it is naturally short in stature.

Of course, one should make it a point to avoid giving the plant too much food and water as it will stunt its growth. In worst case scenarios, it might kill it instead. Apart from that, it requires proper ventilation though as moisture can easily creep into the crevices of its compact structure.

Applying the Screen of Green method will encourage better yields as well as a faster flowering period, especially when used in congruence with a hydroponics system. In the outdoors, Mt. Cook thrives in the cool temperate areas of New Zealand and will perform quite well in the northern hemisphere. Rich and fertile soil will bring out its full flavors especially when feeding it with nutrients.

Kiwiseeds sells both feminized and feminized seeds of Mt. Cook. As such, growers may choose from the growing level.

Mt. Cook has an indoor flowering period of 7 to 9 weeks. A vigorous yielder, it produces 14 to 18 ounces of buds per square meter.

Its high resistance against various environmental factors makes Mt. Cook among the top strains to grow in the northern hemisphere. It usually flowers from the last week of September to the second or third week of October. Once ready for harvest, it yields at least 18 ounces of buds per plant.

What is the Mt. Cook strain yield?

How much THC does Mt. Cook have?

What are the origins of the Mt. Cook strain?

Mt. Cook was created from a mix between Northern Lights, Afghani, Hash Plant

Have you ever smoked or grown your own Mt. Cook? Please let me know what you think about this marijuana strain in the comments below.