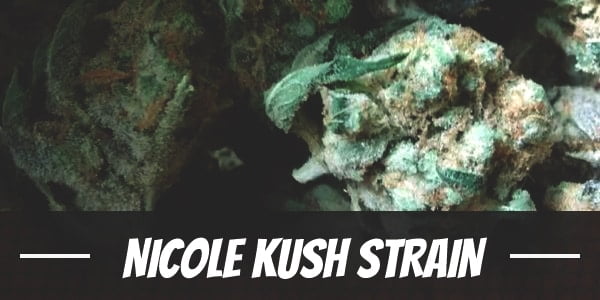 Never has a strain stunned enthusiasts like that of Nicole Kush. It is a pretty herb that produces blue buds coated with an ample layer of sticky resin and sparkling trichomes. Not only that, each leave an impression on users with its density especially as there seems to be a subtle heaviness when placed in one’s hand.

Adding to its appeal is its high levels of THC, which range from 17% to 25%. It delights users with its calming euphoria that leaves one in a state of bliss after drawing its sweet smoke. And, while it is not recommended for day use, enthusiasts may still take a hit of the strain for some late night introspection before hitting the sack.

Suffice to say, Nicole Kush is a powerful heavy-hitting strain that knocks users to sleep when used beyond limits. However, nothing short is expected of the Kosher Kush and Nicole cross from DNA Genetics. With the help of Marimberos, the two created an Indica-dominant strain with high resin production and high yields with a strong emphasis on terpene profiles.

The Nicole Kush experience begins with the introduction of an uplifting sense of euphoria. It paves the way for mental clarity so happy thoughts swarm the mind. In all likelihood, it will take one to cloud nine. The initial onset brings out tranquility and peace too, so users are prepared for the upcoming body high.

Gradually, a light pressure trickles down from the temples. It is calming but, at the same time, it is powerful enough to free the users of aches, pains, and tensions. Replacing the tightness is a soothing buzz that plants a heaviness in the limbs as it continues to spread throughout the body.

After about an hour or two, the full Indica effects of the herb manifest as users begin to feel drowsy. Subtle at first, it later intensifies into a blanket of relaxation that tucks users in to sleep as Mr. Sandman takes the mind on a trip to dreamland. Because of its heavy-hitting effects, Nicole Kush is best reserved for nighttime use especially for unwinding after a long day. Otherwise, it can be difficult to stay focused or productive in the morning and afternoon.

Nicole Kush has the pungent scent of an earthy Indica. It is strong with obvious overtones of pine and herbs. There is a subtle sweetness too, especially when the buds are broken apart or combusted.

Once drawn in, the sweet citric flavor of lemons accentuated by wood fill the palate. Further enhancing it are overtones of wet soil and pine that linger in the palate even after the last exhale.

Like other strains, Nicole Kush has inhibiting cannabinoids that interfere with the body’s natural ability to produce moisture. As such, it is not uncommon for one to experience dry eyes and a cottonmouth regardless of the dose or method of consumption. The side effects are usually mild and barely noticeable but may be too uncomfortable for beginners. In such cases, it is best to stay hydrated throughout the day to ease the ache.

Nicole Kush provides relief to a variety of afflictions through the combined effects of its cannabinoids. Among its best uses is relieving stress, which manifests itself in fatigue, tiredness, emotional instability, and anxiousness. These same symptoms are present in people with mental health issues like depression and PTSD too. As such, the Indica-dominant bud is also an effective anti-depressant that calms battles inside the mind.

A natural painkiller, the same psychoactive compound that induces the happy high also soothes various aches and pains. Beginning from the temples, it relaxes the body to prevent each muscle from contracting uncontrollably resulting in gut-wrenching cramps.

The freedom from tension and inhibition can be quite relaxing. And, as such, users will find themselves cradled to sleep with its sweet sedating effects. As such, it makes for a great sleep-aid for people with insomnia who need a good night’s rest.

It is necessary for aspiring growers to have the basic gardening skills when cultivating cannabis. However, with Nicole Kush, one need not have previous experience with growing.

A hardy plant, it can withstand various unpredictable factors such as fluctuations in weather. With its thick stalks and branches, it stands stall against strong gusts of wind too. Neither will it break easily from the weight of its heavy buds. Besides that, it is a quick-flowerer that yields high.

Indoor cultivators may want to manage its height by topping the plant early. In addition to that, growers may also apply the Sea of Green technique to keep it short. And, because of its propensity for a warm weather, it is best to adjust factors like lighting, humidity, and temperature to mimic a Mediterranean climate.

This is not to say the plant will not grow well in the colder regions of the northern hemisphere. Its sturdy structure is actually quite beneficial in that it allows the herb to flourish regardless of the weather. Moreover, its availability in feminized form makes the growing process a little more easier too.

After initiating the flowering stage, it takes 8 to 9 weeks for Nicole Kush to finish. With the proper methods, it’s then going to produce 16 to 18 ounces per square meter.

An outdoor grown Nicole Kush plant flowers by mid-October at the latest. When done, a skilled grower can harvest an enviable 21 to 28 ounces per plant.

Have you ever smoked or grown your own Nicole Kush? Please let me know what you think about this marijuana strain in the comments below.