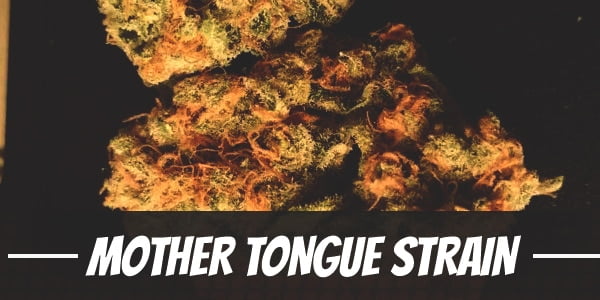 The strain Mother Tongue has an interesting name. For one, it alludes to the language a person has used since childhood or is most familiar with. As such, one would think the Sativa-dominant hybrid takes it easy on people who are using marijuana for the first time.

Far from it, the bud is suited for veterans with its 24% THC. In the hands of a beginner, it can go wrong very quickly with some feeling overwhelmed as its impressive potency overstimulates the mind. Of course, this is not to say one should stay away from the strain indefinitely.

With the help of a seasoned friend, the high-flying experience can be pleasant even at the comedown. Completely sober after a session of Mother Tongue, most casual users continue doing work or pursuing personal projects.

In creating Mother Tongue, JinxProof Genetics used three distinct strains. The first is a combination of Watermelon and Afgooey, which provides the offspring with a delicious terpene profile. Meanwhile, the addition of JOG or (Jesus OG) Kush improved upon the previous fusion’s growth structure.

Right off the bat, Mother Tongue instills an unparalleled sense of mental clarity through a rush of euphoria. In uplifting the mind, it leaves users feeling happy from within. The cerebral stimulation also sparks creativity while allowing thoughts to form freely and develop into innovative ideas.

Keeping users from burning out is a continuous flow of energy in the background. Subtle at first, it gradually intensifies as the hours pass by. Gradually, a light pressure from behind the temples trickles down to the rest of the body. It kneads the muscles and removes tightness. And, though it envelops users in deep relaxation, it is not at all sedating or lethargic. Rather, it oils the joints so users can move without inhibition.

Overall, Mother Tongue is a great wake-and-bake strain that is best used in the morning in place of coffee. It energizes users through and through. At the same time, it enhances the mood and renews motivation so users can continue being productive even as the effects wane.

Mother Tongue boasts a medley of sweet citric as well as spicy flavors. It is pungent too, due to the high levels of THC it contains. Broken apart or combusted, the buds release a mix of dank earth, wood, and coffee.

Various flavors burst in the mouth the moment Mother Tongue is drawn in. There are fruity hints of berries and melons accentuated by a slight cut of cheese. Savoring the bud reveals its more complex profile of earth, coffee, and wood that intensify on the exhale.

In worst of scenarios, Mother Tongue can green users out. The condition is characterized by a disorienting dizziness that, as it heightens sensations, can heighten anxiety levels. Though rare, it might develop into a subtle feeling of paranoia. Thankfully, all are easily avoided through pacing and consumption.

As with all strains, Mother Tongue has a dehydrating effect. This is mostly due to cannabinoids interfering with the body’s natural ability to produce moisture. Most seasoned users ignore the symptoms due to its mildness but, for beginners, staying hydrated will manage the discomfort.

Presumably, Mother Tongue is a recreational strain. Still, one should not discount the immense therapeutic value it provides with its impressive amount of THC. At that level, the psychoactive compounds becomes a natural analgesic and stress reliever.

It eases the mind of overwhelming dread and anxiety, which are also both symptoms of mental health issues like depression and PTSD. And, in doing so, it positively affects behavior as well as an upbeat mood that lasts for hours.

Though temporary, it also alleviates various types of aches and pains beginning from the temples. It also comforts users suffering from the agony caused by cramps while energizing the body through and through.

Mother Tongue exudes the typical growing characteristics of a Sativa. It is tall and stretches massively during the flowering phase. It will need to be topped a few times to keep its height manageable. Still, heavily pruning the plant during the late vegetative to the early flowering stage is still possible. Doing so will ensure an even canopy and greater yields.

Without a doubt, the strain prefers basking in the sun for long periods of time. As such, it will flourish in a warm, semi-humid Mediterranean climate. This is not to say the plant will not perform well in cooler weather. On the contrary, it is flowers quite fast and can withstand the cold.

At the moment, Mother Tongue only comes in regular form. As such, growers will have to apply pre-germination methods like soaking to encourage more female plants. Low-Stress Training, on the other hand, will keep it from turning into hermaphrodites.

The eye-catching hybrid produces attractive buds that are accentuated by a wide array of colors that range from red, pink, and purple.

Mother Tongue is a fast-flowerer. In controlled settings, the herb finishes within 7 to 9 weeks with each square meter producing at least 12 to 16 ounces of buds especially when using the Screen of Green method.

Mother Tongue flowers from the last week of September to the middle of October. Normally, it yields at least 16 ounces of buds per plant but experienced growers can coax it to produce more.

What is the Mother Tongue strain yield?

How much THC does Mother Tongue have?

What are the origins of the Mother Tongue strain?

Mother Tongue was created from a mix between Watermelon, Afgooey and JOG Kush

Have you ever smoked or grown your own Mother Tongue? Please let me know what you think about this marijuana strain in the comments below.