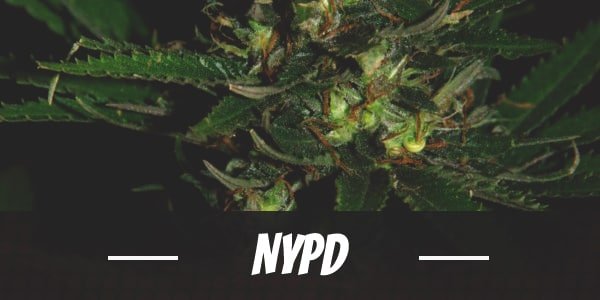 ‘NYPD’ may raise the hairs of many enthusiasts in the big apple at a time when marijuana was still illegal. But, these days it is rarely a cause for concern among users in the community especially as a strain of the same name has made its rounds. Although, instead of meaning ‘New York Police Department,’ it is an abbreviation for ‘New York Power Diesel.’

In creating the bud, Nirvana Seeds used their Aurora Indica bud for its calming mental effects and soothing body high and paired it with a strain called Eldorado. The latter is a Mexican landrace made of pure Sativa genetics.

The mix gives rise to a powerhouse with a Sativa-leaning cerebral buzz that is perfectly complemented by a relaxing body high. While its recreational use is highly documented, NYPD remains valuable to the medical marijuana community for its therapeutic benefits.

Lab testing shows NYPD has potent levels of THC which usually varies around 15% to 24%. It delivers a fast-acting euphoric rush. Obvious almost immediately after the first puff is a mental clarity that radiates in different ways. In some, it is a beam of happiness that shines the way in a fogged path. However, casual users with work ahead of them take advantage of the heightened focus brought about by the clearheaded high.

After about an hour or two, an uplifting buzz trickles down from between the temples. It is warm yet fuzzy and envelops users in an incomparable feeling of deep relaxation. It is stimulating and energizing, one that surges throughout the muscles and allows one to move around with ease.

Because it is not at all heavy-hitting, NYPD is a great wake-and-bake strain to use early in the morning or right before lunch. It stimulates the mind and allows users to stay productive throughout the day.

To say that this herb is pungent is an understatement. Opening NYPD container immediately fills the air with an attention-grabbing skunky diesel scent. Enhancing it is a citric sweetness accentuated by notes of lemon once the buds are crushed or broken apart.

NYPD is a tangy strain characterized by strong flavors of citrus and lemons. Its notable. It blends perfectly with refreshing yet earthy notes of pine. On the exhale, the smoke transforms into a sour, diesel-like aftertaste.

Like other strains, NYPD comes with a mild case of dehydration. Its effects are most noticeable in the eyes and the mouth, areas most affected by the moisture inhibiting properties of cannabinoids. Thankfully, neither are setbacks to the overall marijuana experience. Moreover, they each go away on their own and are easily addressed by downing a few glasses of water.

Being a predominantly Sativa strain, NYPD can sometimes trigger anxiety especially in people prone to the condition. In some cases, it may come with temporary dizziness or a headache. All of which are side effects to using exorbitant amounts. For this reason, users must always practice pacing and moderation.

At up to 1%, NYPD’s CBD levels are already higher than most recreational strains. Still, it is not enough to manage conditions like seizures. However, with the combined efforts of its THC and cannabinoids like terpenes, it provides a reprieve against a variety of afflictions which makes it a valuable strain in the medical marijuana community.

For one, its high levels of THC provide a powerful soothing buzz that eases pain including the sharp sting caused by spasms. At the same time, the bud also helps with spasticity – a condition that is characterized by tightness or stiffness in the muscles that greatly affect movement, gait, and even speech.

NYPD’s strong point, however, is undoubtedly its mental effects. It brightens moods and positively changes negative outlooks that often affect users with depression, anxiety, or PTSD. Its happy high provides comfort to users whose mental illnesses have been exacerbated by stress.

One of the best times to use NYPD is right before a meal. This is because the same stimulating encourages a hearty appetite that makes meals truly enjoyable.

As a first-generation (F1) hybrid, NYPD grows 25% faster and brings out the best qualities of its parent strains. For one, its stretched stalks are heavily influenced by its Sativa heritage yet it has the sturdiness of many Indica leaning hybrids.

Its branches are equally thick and hardy, being that they rarely break off either due to the weight of its heavy buds or gusts of wind. The buds often take on the same shape as well. They taper on one end and are just as dense. Yet, this does not equal to an easy grow.

For this reason, many prefer growing their strains indoors. In controlled environments such as greenhouses, growers can easily adjust factors such as lighting, temperature, and humidity to increase the strain’s full potential.

Currently, only feminized seeds of NYPD are being sold. Some dispensaries claim to sell feminized seeds of the bud but green thumbs may need to take it with a grain of salt. With that said, aspiring growers will need to plant more seeds or use pre-germination methods like soaking to increase the chances of growing females. Meanwhile, applying Low-Stress Training will keep calyx-filled plants from turning into hermaphrodites.

Generally speaking, NYPD has an indoor flowering period of 9 to 11 weeks. However, depending on the skill of the grower, it can be shortened to as much as 7 weeks especially when using growing techniques like the Sea of Green. Regardless, the strain will produce between 14 to 18 ounces of buds per square meter.

Garden grown NYPD usually produces at least 14 ounces of buds per plant once it blossoms by the second or third week of October to early November. Under the expert care of a seasoned grower, it can flower as early as the last week of September.

Have you ever smoked or grown your own NYPD? Please let me know what you think about this marijuana strain in the comments below.