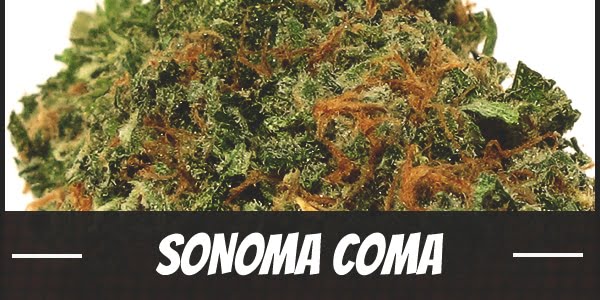 Sonoma Coma is anything but drab. It turns heads with its tropical colors of yellow, green, and red. Not only that, it is a seasoned user’s go-to strain for its staggering 17% to 25% THC. Still, beginners may enjoy its tropical smoke by pacing the bud in small increments.

Sadly, its lineage remains a mystery to most due to secrecy. Its breeders have not been revealed either but many speculate that it is the Happy Lil Trees of Vallejo, California. One thing is for sure though, Sonoma Coma comes from the gardens of Sonoma County.

In spite of the enigma surrounding Sonoma Coma, it remains one of the most sought-after medical marijuana strains. It first garnered the attention of the cannabis industry after it won 3rd place in the 2011 San Francisco Cannabis Cup. However, it was not until after it took home the 2012 award for ‘Best Sativa’ at the High Times Medical Cannabis Cup held in Lost Angeles that it skyrocketed to soaring new heights.

While its name alludes to a possible comatose effect, that is not at all the case. Sonoma Coma delivers an invigorating high that begins almost immediately after the first toke. It envelops the body but its initial onset is most notable in the head, where a rush of euphoria clears the mind and boosts moods.

To casual users, the upbeat disposition is not at all a hindrance to productivity. In fact, the mental clarity helps form into innovative ideas. And, with a keen curiosity, many find themselves deep in thought while going through tasks one by one.

After about an hour or two, the uplifting sensation begins to work its way to the muscles. It loosens tightness, frees away tension, and calms the mind so the body can fully relax. Even so, it does not lead to a couch lock. Rather, users move with fluidity as the limbs are stretched.

Because of its great wake-and-bake qualities, Sonoma Coma is best used in the morning or at noon to jumpstart the day with creativity and a positive outlook.

The breeders of Sonoma Coma seemed to consider highly the aroma in creating this award-winning strain. Opening a bag of the plant fills the room with the signature tanginess of pungent citrus. Meanwhile, its undertones of spices and herbal fill the room once the bud is broken apart or combusted.

Drawn in, Sonoma Coma bursts with a tropical goodness reminiscent of pineapples, mangoes, and lemons. Enhancing the citric overtones are equally strong flavors of spicy hash and herbs. On the exhale, a woody and earthy aftertaste lingers in the mouth.

Using marijuana always leads to a cottonmouth. But, as cannabinoids interfere with the production of moisture in the tear ducts, users end up with dry eyes too. Thankfully, both are mild and often go away with time. However, if symptoms persist, hydrating with a few glasses of water will do the trick.

It is not uncommon for potent Sativa-leaning strains like Sonoma Coma to cause dizziness and headaches. A rare occurrence though is the feeling of paranoia which only ever shows up when one uses too much of the strain. As such, individual tolerance must always be taken into consideration when using marijuana.

Sonoma Coma works best as both an anti-depressant and a stress reliever. Both work hand in hand in managing stress levels that often result in irritability, overwhelming anxiety, and fatigue – all of which are similar to symptoms of depression.

One big difference though is that the latter is a lasting condition that can only be temporarily relieved. For this reason, users with mental illness must still seek out services from a health professional.

Apart from the boosts in mood, THC is also responsible for the reduction of pain. It delivers a soothing buzz that eases away the sharp sting caused by sudden muscular contractions and hunger pangs. In doing so, it eases the stomach so food-deprived bodies can process their food properly. Meanwhile, its antiemetic properties keep users from vomiting their food.

Typical of Sativa-leaning strains, Sonoma Coma grows tall and is quite sensitive. Thus, while it proves to be a vigorous yielder outdoors, many growers prefer cultivating their strain indoors.

In this way, factors such as lighting, humidity, and temperature can be easily adjusted to bring out the plant’s full potential. Not only that, the controlled environment helps retain similar chemical profiles regardless of when the batch was harvested.

With that said, Sonoma Coma responds well to height management techniques like early topping, bending, and super cropping. Apart from keeping the plant short, it also encourages better yields. Applying the Screen of Green method, on the other hand, will maximize the growing area by ensuring plants grow sideways rather than stretch upward.

Sonoma Coma produces plump nugs surrounded by a colorful mix of green, orange, and yellow. Making it even more stunning are its purple undertones that only reveal itself under a jeweler’s loupe as a fine coat of crystal trichomes tend to overshadow it.

Sativa dominant strains often have a long flowering period of 10 to 12 weeks and Sonoma Coma is no different. Once mature, growers harvest between 12 to 16 ounces of buds per square meter.

Garden grown Sonoma Coma usually flowers between the second or third week of October to early November. It yields at least 16 ounces of buds per plant.

Have you ever smoked or grown your own Sonoma Coma? Please let me know what you think about this marijuana strain in the comments below.