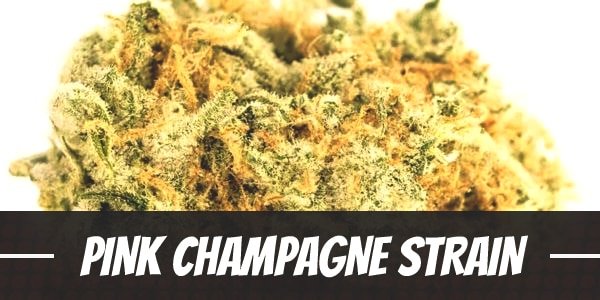 Pink Champagne is an attractive strain. It produces emerald green buds with hints of rust and a striking purple along with flashes of pink. Its colors further intensify when one exposes it to cooler nighttime temperatures, adding value to its bag appeal.

Such hues are to be expected from the Granddaddy Purple progeny. The strain itself is widely prized by growers and users alike for its eye-catching look, berry aroma, grape flavors, and deep relaxation. Cherry Pie, on the other hand, sports a contrasting orange and deep royal purple. It is a quick-acting strain with a long-lasting high.

One thing to remember is that Granddaddy Purple and Cherry Pie also produced another strain by the name of Phantom Cookies. Although the parentage is similar to Pink Champagne, it delivers a more Sativa-oriented effect.

With that said, Pink Champagne’s brand of high tends to be more body-centered – especially at the comedown after users are finally enveloped in relaxation. However, at the start, it does induce a gentle nudge of happiness that removes the stress and tension accumulated throughout the day. Eventually, it should take an hour or two for its Indica effects and sedating end to follow.

It is also quite versatile. With THC levels ranging between 16% and 23%, users could easily adjust the pacing and number of puffs to suit the day’s needs.

Not one to waste its time, Pink Champagne delivers a rush of euphoria within minutes after the first two to three puffs. However, in spite of its intensity, it does not leave users feeling stunned with an overwhelming, head-slamming high. Instead, it simply prepares users for the upcoming body effects by uplifting the mood.

Enhancing the innate sense of happiness is a soothing body buzz that comes 30 minutes to an hour after the initial onset. It starts at the temples before ebbing down to the lower extremities, kneading the muscles until it is free of tension. As it reaches the toes, users will have been enveloped in a deep relaxation.

It is essential that one find a comfortable spot such as the bed or couch for lounging. This is because the comedown is likely a sedating buzz that lulls users to sleep without even knowing it. It goes to say, too, that Pink Champagne should be used at night. In this way, it will not interfere with one’s work.

Pink Champagne exudes a sweet fragrance with fruity overtones of berries. Its undertones of wet soil, on the other hand, intensify after breaking apart or combusting the buds.

Upon consumption, users will notice a delectable berry flavor. It is sweet but a little tangy especially as the fruity smoke swirls in the mouth. On the exhale, it leaves an earthy aftertaste.

With Pink Champagne, users can expect the usual arid spell that casts dryness in the eyes and the mouth. There are other offshoots as well, such as dizziness, anxiety, and paranoia. Usually, it results from overconsuming the strain, but it could also be affected by one’s disposition before the high. In such cases, starting with low dosages or waiting until one is calm before toking.

Pink Champagne has high levels of THC that induce an impressive head and body high. However, it is also the same psychoactive compounds that are highly beneficial against a wide variety of health conditions. As such, it remains to be of significant therapeutic value despite its presumably recreational purpose.

Its happy head high, for instance, is an uncanny source of reprieve against the onslaught of depression, anxiety, and PTSD. It balances out the emotional instability by increasing the production of dopamine, thereby instilling a sense of happiness. Apart from fortifying one against negativity, Pink Champagne could also be used as a stress reliever. It calms the nerves and clears the mind.

It is also an effective analgesic and anti-inflammatory. It appeases redness, reduces swelling, and relieves various types of aches or pains. It also has muscle-relaxing properties that prevent further contractions or spasms that oftentimes hurt patients. As such, it could be of use against conditions like headaches, inflammations, cramps, and joint pains.

Pink Champagne is an excellent choice for home cultivation.  It has a short height and could easily fit in a dedicated tent or a small growing room. Not to mention, it has an impressive growth profile. It is naturally sturdy, able to withstand a myriad of common pests and diseases. Apart from that, it tends to flower quickly and yield vigorously.

Some pruning is needed if one chooses to grow Pink Champagne indoors. It tends to grow dense foliage that could easily harbor moisture in between its crevices. Removing dead branches or leaves will help aerate the plant, especially the lower nodes.

Growers may also cultivate in a garden or farm. The outdoors provides it with access to nutrient-rich sunlight which help it grow bigger and bushier. Moreover, having a light breeze that will cast air unto it will prevent humidity-related problems such as mold or mildew from developing while also adding strength to its stalks.

TIP: Looking to buy seeds like Pink Champagne? Check out our seed bank

Indoors, Pink Champagne matures in 9 to 10 weeks. Growers can expect between 10 to 12 ounces of buds per square meter.

Pink Champagne blossoms between the second to the last week of October. It yields at least 12 ounces of buds per plant once ready for harvest.

Have you ever smoked or grown your own Pink Champagne? Please let me know what you think about this marijuana strain in the comments below.