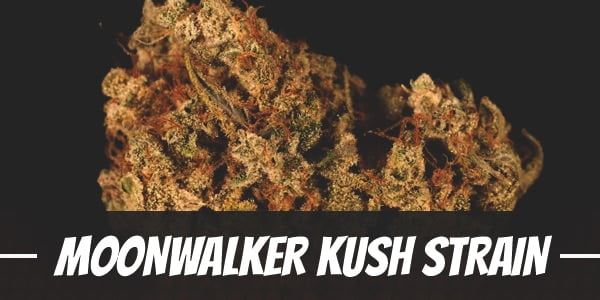 Moonwalker Kush is a rather intense strain. It boasts THC levels that constantly go beyond the 20% range, averaging between 25% and 28%. Thus, a little also goes a long way.

Seasoned users will find that it is an excellent pick-me-up on the dreary days. It energizes the mind and invigorates the body so one can finish tasks quickly and head out to a night out with friends. The heaviness usually takes a while to settle, but users should find a comfortable spot before it takes over.

It hails from two Indica-leaning strains, Triple OG and Tahoe Alien. Both are renowned for its heavy-hitting body effects. However, the latter induces a soaring head high with a cosmic quality as it entices the senses.

Using it outside of one’s personal tolerance levels could lead to a feeling of dizziness, anxiety, and paranoia – especially among beginners who have not built up a tolerance against the psychoactive compounds.

Moonwalker Kush is a go-to strain among the chronically stressed. It induces an innate sense of happiness that turns the day around at the last minute, reducing the accumulated negativity. At the same time, it refreshes the mind, so users need not go to bed already dreading the next day.

Casual users may find that it is an excellent choice to toke with friends. Its uplifting euphoria encourages an upbeat disposition that increases sociability. It encourages interesting conversations and giggles along with it. Moreover, the stimulation wakes the appetite.

After an hour or two, a soothing sensation ebbs down from the temples. It releases tension from the muscles, kneading it like a masseuse. In its place, there is a physical calm that welcomes relaxation. Although intense, it is rare for it to induce a drowsiness right away. Instead, it bides its time; allowing users to adjust to the heaviness as it settles in the limbs.

With that said, Moonwalker Kush is best used as a companion to a night of relaxation or a chill hangout with friends. Its comedown is potentially sedating so it is best to start with low dosages and moderate use with each hour.

Moonwalker Kush is an earthy strain with slightly sour hints of tropical fruit. There is a spiciness to its combusted smoke that is highly to pepper. Counteracting the sharpness is the taste of pine.

In the palate, Moonwalker Kush’s tropical flavors shine through. It is complemented by the initial earthiness form earlier and a subtler hint of spicy pepper which brings out its sweetness. On the exhale, it leaves a refreshing aftertaste of pine.

Though potent, it is rare for Moonwalker Kush to induce an overwhelming head high that greens users out. Most of the time, the offshoots are limited to dry eyes and a cottonmouth as its cannabinoids inhibit moisture production. It lasts for hours but the discomfort is manageable through hydration and avoidance of caffeinated and alcoholic drinks.

Stress relief is, no doubt, one of Moonwalker Kush’s forte. However, by reducing stress, it also paves the way for other forms of reprieve. The uplifting buzz, for instance, temporarily suppresses the early onset of depressive moods while pushing back the overwhelming dread that comes with anxiety. In its place, it plants an innate sense of happiness that wards off the negativity.

Its subtle stimulation also brings rise to an appetite. Thus, patients with eating disorders may find an unlikely ally in Moonwalker Kush in the road to recovery. Most likely, with consistent guided usage, one could return to normal weight. Cancer patients suffering from the nauseating side effects of chemotherapy may also find comfort in the strain. It soothes various gastrointestinal pains, including nausea and vomiting.

With that said, Moonwalker Kush could also be of use as an alternative to opioid-based analgesics. It is a natural painkiller that eases various kinds of aches and pains regardless of cause, intensity, or frequency. It does so too without the unwanted side effects that synthetic medicine sometimes has. \

Feeling free from mental and physical inhibitions, one should fall into a deep, unencumbered slumber without a hitch. Moreover, to this end, Moonwalker Kush provides a sedating buzz that settles into the limbs that will put users to bed within minutes. Moreover, it has a positive effect on the quality and quantity of sleep.

Hailing from a long line of stable Indicas, Moonwalker Kush is a sturdy strain with impressive resistance. It can withstand the many problems caused by common pests and diseases. And, as an added bonus, it can be grown almost anywhere.

Outdoors, it prefers a sunny but dry environment. However, this may be difficult for growers in the northern hemisphere. In which case, it is best to cultivate it indoors where one has more access to indoor growing factors such as lighting, temperature, and humidity. Moreover, provisions could be made for beneficial life-support equipment such as a small fan to cast a light breeze.

Moonwalker Kush has a flowering period of 9 to 10 weeks. Once ready for harvest, growers can expect it to produce between 16 to 19 ounces of buds per square meter.

A high yielder, Moonwalker Kush could produce up to 23 ounces of buds per plant once fully mature. Harvest usually falls around the second to the fourth week of October.

Have you ever smoked or grown your own Moonwalker Kush? Please let me know what you think about this marijuana strain in the comments below.