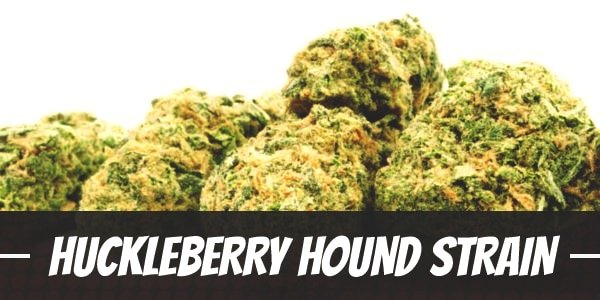 Many may remember Huckleberry Hound from a popular TV series portraying the life of a well-intentioned blue coonhound. The show has inspired many generations up until its end in 2003. In fact, one of the many strains in the cannabis industry is named after it.

Huckleberry Hound is a hybrid with versatile THC levels that users can adjust depending on one’s preference with regard the high. Thus, it makes for an excellent strain that beginners could enjoy. It has an uplifting head high that translates to the body as a subtle rush of euphoria that subtly removes pains and aches.

Not much is known about its origins. However, many speculate that its lineage traces itself back to Blueberry and Chemdawg.

Huckleberry Hound is not one to startle users at the first puff. Instead, it bides its time with a gentle euphoria that gradually intensifies. It improves the mood as it swarms every nook and cranny of the mind. No doubt, it will leave users feeling upbeat.

Its ability to enhance one’s disposition makes it an impressive recreational strain. Users may consume it with friends for a day filled with fun activities. Not to mention, it has THC levels that range from a manageable 12% to a moderate 19% which both beginners and seasoned users could pace to accommodate one’s tolerance level. In all likelihood, like-minded friends will end up giggling and laughing at random jokes or interesting conversations.

Alternatively, one could also simply use it alone to the mind and body from stress. Regardless, one of the best times to use Huckleberry Hound is right before a meal. The mental invigoration also stimulates the appetite.

30 minutes to an hour after the initial onset, a tingling sensation ebbs down from the temples. It makes its way through the back of the neck before arriving at the lower extremities. It kneads the muscles free of tension, making the body as limber as a well-oiled machine.

Huckleberry Hound boasts a sweet berry scent underlined by floral notes. It has hints of spicy earth to blunt the potential sourness. Broken apart and combusted, its buds exude a refreshing pine.

In the palate, Huckleberry Hound’s spicy flavors of wet soil take center stage before quickly dissolving into a woody pine. Swirling the smoke brings out its blend of sweet berries which, on the exhale, leave a delectable tanginess.

Users can expect Huckleberry Hound to cast the usual dry spell. It affects the eyes and the eyes the most, especially once its cannabinoids begin to interfere with moisture production. Its effects are usually mild, but one may prevent it from exacerbating by downing a few glasses of water throughout the day.

Huckleberry Hound has a myriad of medicinal benefits. One of which is stress relief. In inducing its recreational mood lift, it also soothes tired spirits, calms the nerves, and refreshes the mind. Along with the upbeat disposition, it allows the chronically stressed to withdraw the mind to a state of calm.

Its therapeutic value extends to other aspects as well. For instance, it could also be used to manage symptoms of depression, anxiety, and PTSD. The mood-enhancing onset also brings in a gentle euphoria that temporarily pushes back feelings of hopelessness and despair.

Although subtle, the light mental stimulation could also be of use to patients with a lack of appetite. It encourages users to eat meals heartily. Moreover, because it soothes the stomach, it also appeases gastrointestinal pains reducing the possibility of regurgitation, vomiting, or nausea.

Patients will also find comfort in its painkilling properties. Although moderate, its THC levels are still enough to turn it into a natural analgesic that eliminates a wide variety of pain regardless of the source or intensity. It is particularly effective against common aches and pains such as headaches, joint pains, and arthritis.

Huckleberry Hound exhibits many of the coveted traits of both Indicas and Sativas. For instance, it is not at all lanky despite the fact that it tends to stretch upward. On the contrary, it has rather thick stalks with good resistance to many common pests and diseases. It is also relatively dense, allowing better air flow and light distribution in the lower nodes.

Highly versatile, Huckleberry Hound flourishes both indoors and outdoors. Growers have more control over the latter with regard factors like lighting, temperature, and humidity. Moreover, provisions could easily be made to accommodate any needs that may arise as the plant transitions from one phase to the other.

Controllable environments also make it easier to set up advanced growing techniques like the Sea and Screen of Green method. The former coaxes a single cola while the latter creates multiple budding sites. Both shorten the flowering period and improve yields.

However, the free space and access to sunlight allows Huckleberry Hound to grow vigorously. It is able to develop a more robust root system that is not confined by a pot. Its tendency to stretch also becomes less of a problem since it is not limited by a tent or room. The natural illumination, on the other hand, provides it with additional energy for bud production.

TIP: Looking to buy seeds like Huckleberry Hound? Check out our seed bank

Indoors, Huckleberry Hound has a total flowering period of 8 to 10 weeks. By then, growers can expect between 12 to 14 ounces of buds per square meter.

In the northern hemisphere, Huckleberry Hound takes anywhere between the second to the last week of October to fully mature. Once ready for harvest, it yields high – producing at least 12 ounces of buds per plant.

Have you ever smoked or grown your own Huckleberry Hound? Please let me know what you think about this marijuana strain in the comments below.