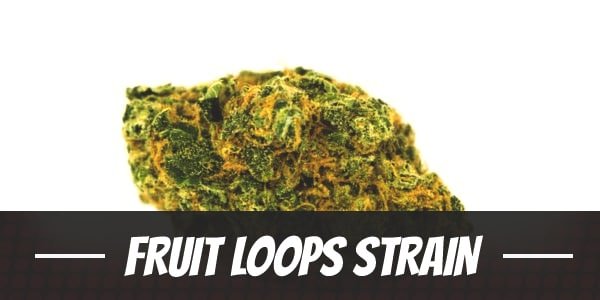 The beloved cereal Froot Loops has been around for many years. Introduced to the market in 1963, different generations enjoyed its tropical flavors. It should come as no surprise that many adults now have taken inspiration from each chewy spoonful. In fact, this indica leaning strain was named after it.

Fruit Loops is a delicious strain that boasts a fruity terpene profile that hails from four flavorful strains:

Blue Dream. A dreamy strain with an enthralling berry flavor, Blue Dream enlivens the senses and wakes users up from lethargy. It inspires an upbeat mood as well as a clarity that inspires creativity.

White Widow. White Widow is renowned for its impressive trichome production. It boasts crystalline buds that give it the look of a white cast, signaling what is to come. Its effects are quite stimulating, enhancing both sociability and the quality of one’s conversation.

Grapefruit. Sativas have fruity profiles and Grapefruit is no different. It is deliciously fruity, coating the tongue in an amalgam of fruity flavors with a particular distinction of grapefruits.

Blueberry. This popular Indica-dominant strain embodies its name. It tastes like fresh blueberries and an overall sweetness emanates in its aftertaste as well. However, instead of invigorating, its effects are mostly heavy-limbed.

Apart from being a delight to the senses, Fruit Loops induces a gentle stimulating head high that improves the mood within minutes after the first few puffs. It raises energy levels although not to the point of overwhelming the mind. Complementing the initial onset is a soothing buzz that lays tiredness to rest.

The onset comes quick for Fruit Loops. Within minutes after the first two to three puffs, it delivers a gentle euphoria that uplifts spirits and calms the nerves. It improves the mood too, encouraging a contented and social disposition. Used with friends, it is likely to inspire interesting conversations. Although, one could also choose to use it alone.

Two to three hours from the onset of cerebral buzz, a soothing sensation begins to form between the temples. It comes in waves, rushing into the muscles with a deep relaxation. Tensions free as it eventually turns into a heavy buzz that settles into the limbs. Users gradually begin to feel drowsy until the eyes droop so low and one slips into a deep, unencumbered sleep.

Fruit Loops could be used any time of the day. However, it must be moderated so it remains pleasant. Too much could be counterproductive, especially when used during the day. However, as an end-of-day treat, its sedating comedown is welcome against the accumulated stress.

Fruit Loops is just as sweet as the cereal it is named after. It is also equally fruity and tangy, boasting tropical notes. Breaking apart and combusting the buds reveals a berry overtone with a spicy undertone.

Upon consumption, users immediately detect the delicious tropical notes that Fruit Loop exudes. Its fruity profile is largely made up of berries with a notable sweetness that is similar to honey. Enhancing it on the exhale is a spicy aftertaste.

A cottonmouth and red, arid eyes are two of the most common reactions to smoking cannabis, including Fruit Loops. Seasoned users often ignore the dry spell, while beginners may down a few glasses of water to manage the subtle but persistent irritation. There is also the potential for greening out, a condition characterized by dizziness, headache, and anxiety. Pacing and moderation, however, will keep the offset at bay.

Fruit Loops has high levels of THC that turn it into a sought-after recreational strain. However, it is the same psychoactive compound that delivers the initial head high that produces its medicinal qualities.

The uplifting onset, for instance, also relieves stress and manages symptoms of psychological distress such as depression, anxiety, and PTSD. It invigorates the mind, bringing back a sense of clarity toward one’s circumstances. It also enhances the mood and lightens the load of a bad day.

As an added benefit, its subtle stimulation also brings back the appetite. It soothes the stomach first, freeing it of cramps, so that it could process meals smoothly. At the same time, it prevents the food from regurgitating upward resulting in vomiting. Thus, it is excellent for people with eating disorders as well as cancer patients experiencing the nauseating side effects of chemotherapy.

An effective analgesic, Fruit Loops also provides comfort to patients with chronic aches and pains. It relaxes the body, soothes the muscles, and releases tension. It is particularly effective against conditions like arthritis, headaches, joint pains, and cramps. Moreover, compared to synthetic medicine, it has fewer side effects.

Fruit Loops exhibits multiple Indica traits. It is short, bushy, and compact. Not only that, the buds it produces are equally dense too. With regard its look, it sports an olive hue enhanced by golden undertones with bright, red-orange hairs and a thick coat of trichomes.

It is also relatively sturdy. As such, it will thrive virtually anywhere. Growers could cultivate it in a small tent or a dedicated grow room. One may further maximize the space by applying the Sea of Green method. It requires placing at least four plants in a single square meter and then coaxing the main cola. This shortens the vegetative phase without affecting yields.

Its performance is even more impressive outdoors. It has good immunity against the colder weather of the northern hemisphere. Under the sunlight, it grows a robust stalk and produces vigorously.

It takes Fruit Loops between 7 to 10 weeks to fully mature. Once ready for harvest, growers can expect up to 12 ounces of buds per square meter. Subjecting it to certain growing methods will further improve the yield.

Depending on the conditions, Fruit Loops could flower from the end of September up to the last few days of October. It yields at least 12 ounces of buds per plant once ready for harvest.

What is the Fruit Loops strain yield?

Fruit Loops yields 10 to 12 ounces per square meter indoors and 10 ounces or more per plant outdoors.

How much THC does Fruit Loops have?

What are the origins of the Fruit Loops strain?

Fruit Loops was created from a mix between Blueberry, Grapefruit, White Widow and Blue Dream.

Have you ever smoked or grown your own Fruit Loops? Please let me know what you think about this marijuana strain in the comments below.