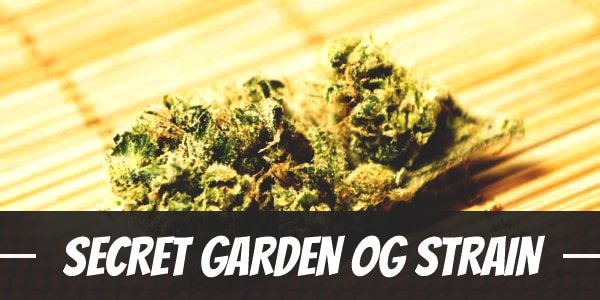 Secret Garden OG is a highly potent strain that boasts THC levels of 20% and above. It could easily overwhelm beginners and seasoned users alike when consumed beyond tolerance levels. In moderation, however, its lavender-flavored smoke induces a gentle but quick-acting euphoria that improves the mood and prepares users for a night of relaxation.

Its high levels of psychoactive compounds likely come from Rug Burn OG’s side of the family. It is an award-winner that landed on the High Times’ prestigious list of ‘Earth’s Strongest Strains 2014.’ A potent hybrid, its effects usually lie between the cerebral and physical.

Lavender contributes its floral sweetness, adding a dash of lavender, herbs and spices to the mix. The strain, itself, has the soothing and relaxing effects of the real flower and could be of use therapeutically. It offers alternative relief to many conditions that plague the people of today.

Secret Garden OG delivers a rush of euphoria to both the mind and the body. Requiring only minutes to take effect, the change in disposition is evident upon consumption. Users seem less tense and much more upbeat.

Casual users will find that it is an impressive strain to use during the second half of the day when one needs that extra push for productivity. In making way for happy thoughts, it also refreshes the mind from the constant worry that consumes it. The clarity sharpens focus, enhancing one’s ability to be concentrate and generate new ideas. Not to mention, it delivers a subtle rush of energy that helps one complete tasks.

At the comedown, the gentle invigoration is replaced by a soothing sensation. It settles in the limbs first, planting a heaviness that intensifies with each hour that passes. By the time one arrives home, it will have enveloped users in relaxation.

Finding a comfortable spot is of utmost importance. As the end draws near, users will feel the weight at its heaviest, hinting at a potential couch lock if one does not move to the bed in time. Because of this, Secret Garden OG is best consumed late in the afternoon.

Secret Garden OG smells just like a garden full of flowers. Complementing it is an aroma of wet soil that enhances its notes of wood, spice, and herbs. Upon combustion, however, its lavender overtones intensify.

The strain has a sweet floral taste with hints of herbs and earth. It is rich, rarely irritating the throat and inducing coughing. Instead, there is a dash of spices complemented by an overtone of lavender that intensifies on the exhale.

Experiencing a cottonmouth and dry eyes is not uncommon while consuming Secret Garden OG. Although mild, it tends to last for a few hours before eventually goes away on its own. However, beginner who feel the irritation may down a few glasses of water while avoiding caffeinated and alcoholic drinks.

Secret Garden OG delivers a holistic experience with restorative benefits. Its body-centered buzz signals that it is particularly effective against physical health issues. In fact, in high levels, the psychoactive compound responsible for its recreational high also turns into a natural painkiller.

It relieves aches and pains while simultaneously soothing the body to prevent any further contractions or reactions to pain signals. Its best uses include alleviating joint pains, arthritis, and inflammation. Moreover, its muscle-relaxing properties provide a reprieve against tremors, cramps, and spasms.

Its gentle euphoria, on the other hand, is an uncanny ally against psychological distress. It sifts through the negativity to find happy memories filled with laughter, confidence, and an innate sense of happiness that puts emotional instability to rest albeit temporarily. Thus, it makes for an excellent anti-depressant, anxiolytic, and anti-psychotic.

It could also be used as a stress reliever too. In uplifting the spirits, it helps reduce the overwhelming dread caused by overexertion. It also improves the mood while the mental clarity assists in aligning goals.

Secret Garden OG is a short strain with impressive resistance against many common diseases and pests. It could be grown virtually anywhere. However, growers have the most advantage indoors.

Controllable environments offer easy adjustment to essential growing factors like lighting, temperature, and humidity. Moreover, provisions to accommodate any changes that happen between the vegetative and flowering phase could be made. For instance, one may change the light schedules to force the plant to mature earlier and then provide the energy needed for flowering by installing high intensity lights of at least 600 watts.

Growers with knowledge of advanced growing techniques may apply the Sea of Green too. This method requires sowing at least four plants in a single square meter and coaxing a single cola to shorten the vegetative phase without affecting yields. As it grows bushier, one could install a small fan that will cast a light breeze that strengthens its stalks and improves air circulation among the lower nodes.

Cultivating it outdoors is also an option. Secret Garden OG thrives vigorously in gardens or farms where it has access to natural sunlight, a breeze to blow over it, and free space for its roots to grow, unhindered by the confinement of pots. It flourishes best in a sunny and dry environment but will perform equally well in the cool weather of the northern hemisphere. Provided, of course, that it is situated in an area where there are no obstructions that will prevent it from soaking in the sun for as long as it can.

There is no need to deviate from the usual feeding and nutrition practices. But adding boosters will significantly aid in bud production.

It takes Secret Garden OG between 7 to 9 weeks to fully flower. Once ready for harvest, it up to 12 ounces of buds per square meter.

Outdoors, Secret Garden OG blossoms around the last week of September to the second or third week of October. Yields are high as each plant could produce at least 12 ounces of buds.

Have you ever smoked or grown your own Secret Garden OG? Please let me know what you think about this marijuana strain in the comments below.