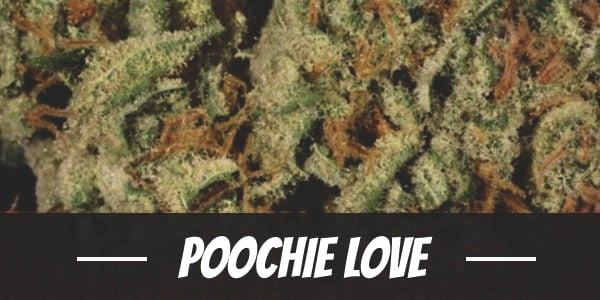 Dog Shit is among the most famous strains of the cannabis industry.

Sadly, despite its promise of an uplifting cerebral buzz, many keep from even trying the bud due to its repugnant smell.

It was to this quality that Archive Seed Bank wanted to address.

Like Dog Shit, Poochie Love strain is a Sativa leaning bud that can be enjoyed by users with various experiences.

It boasts a buildable high that results from its THC levels that range between 13% and 23%.

However, its scent is heavily earthy. Not only that, its body buzz is as relaxing as its Face Off OG parent.

In an instant after the first two or three puffs of Poochie Love, an energizing buzz surges throughout the body and reinvigorates the user. It begins in the temples as a rush of euphoria that enhances the mood.

Along with the mental stimulation is a clarity that sparks creativity. It allows thoughts to flow smoothly and form freely into innovative ideas.

And, coupled with heightened sense of focus, it renews motivation so casual users can work on tasks for long periods of time.

After about an hour or two, the predominantly Sativa strain’s Indica effects manifest.

It starts off as a light pressure from between the eyes that slowly trickles down to the rest of the body. Keeping it from totally sedating users is its initial effects and largely energizing psychedelic effects.

Its wake-and-bake qualities make Poochie Love a great daytime strain. However, using it before bedtime will only keep users awake at night.

Poochie Love is not at all fruity. Instead, it has a pungent fragrance similar to damp earth.

Blending with it are spicy notes of skunk that give the bud a similar aroma to herbal incense especially when crushed or combusted.

Dominating the palate at the first puff is Poochie Love’s earthy flavors.

Hints of skunk, which are complemented by the taste of herbs and spices, are present as well. On the exhale, the Sativa-dominant bud leaves a sharp smoke that has an interesting sweetness to it.

Dry eyes and a cottonmouth are two unavoidable reactions that come with using Poochie Love or any strain for that matter. Marijuana’s cannabinoids, after all, constantly interfere with the body’s ability to produce moisture.

Both are categorized as minor setbacks due to their mildness. However, if symptoms persist, downing a few glasses of water will help.

Some users may feel slightly paranoid due to certain audiovisual distortions that come as a result of overstimulating the mind.

Apart from individual tolerance, one’s disposition before the high can be a major factor that leads to greening out. As such, users must always use marijuana with caution or practice moderation during sessions.

Ask any enthusiast on the street on the reason for using marijuana and, most likely, many will cite stress relief.

This is not uncommon. In fact, a third of users from the United States use the green herb for its calming properties. To this end, Poochie Love works perfectly.

At the same time, the innate sense of happiness allows people cope with depression and other mental health issues such as PTSD.

It also helps patients with ADD/ADHD focus. But, because the effects are only temporary, users must seek the help of a professional for long-term management.

The same psychoactive compound that stimulates the mind also reinvigorates the body.

As such, it can be used as an energizing companion for those feeling physically and mentally fatigued from overwork.

Its analgesic properties also dull various sensations of pain sent by inflamed muscles or damaged nerves to the brain.

At the moment, Archive Seed Bank sells only feminized seeds of Poochie Love.

Because at least 50% of the batch will be males, growers must apply pre-germination methods to increase the likelihood of producing a female.

Low-Stress Training, on the other hand, will keep calyx-filled plants from turning into hermaphrodites.

With that said, Poochie Love is a lanky plant. Its stalks and branches are thin and easily affected by changes in weather, strong gusts of wind, and high levels of moisture in the air.

In fact, it grows slower in the colder climates of northern latitudes as it prefers the warm, sunny environment of equatorial regions.

This is not to say the Sativa-dominant herb does not perform well outdoors.

Rather, it needs the expert care of a seasoned grower so it yields well in spite of its slow growth.

Still, many commercial growers prefer cultivating the strain in less volatile environments where one can easily imitate a Mediterranean climate.

Apart from added protection against pests, indoor growing spaces allow breeders to adjust important factors like lighting, temperature, and humidity depending on its current phase.

However, its height necessitates management techniques such as early topping as it can sometimes grow too tall for its area.

Utilizing soil will help Poochie Love produce richer, earthier flavors. Although, one may have to prepare odor-control measures such as carbon filters as enhancing its terpene profile also releases its pungent scent.

But, aspiring growers may cultivate the herb in a hydroponics system for cleaner buds. Regardless, it will do well in the Screen of Green method.

Poochie Love has a long indoor flowering period of 10 to 12 weeks. Thankfully, the plant rewards its patient growers with no less than 12 to 16 ounces of cured buds per square meter.

In the northern hemisphere, Poochie Love flowers from the last week of October up to the third week of November. Though late, growers can harvest yields of at least 16 ounces of buds per plant.

Have you ever smoked or grown your own Poochie Love? Please let me know what you think about this marijuana strain in the comments below.

While having near stratospheric THC, in has some other attributes such as good taste. PL has delivered time after time.