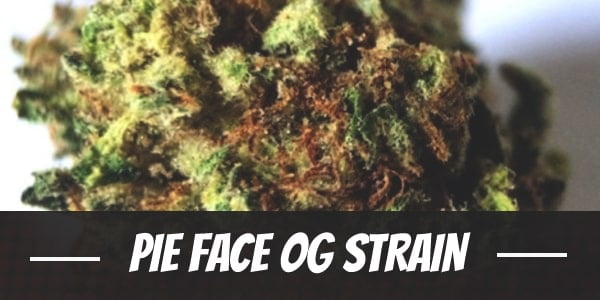 The Pie Face game is one that is filled with suspense and anticipation. Players take turn on the toy and wait for the next victim who gets splat with whipped cream in the face all in the name of good fun. The activity is filled with never-ending laughter and has remained a source of amusement for kids over the years.

Pie Face OG, Pie Face for short, induces the same effect and is aptly named after the game. Its fast-acting onset leaves one giggling wholeheartedly. But, at the same time, its intense Indica-dominant effects help users unwind after a long day.

In creating the herb, Archive Seed Bank crossed its famous Face Off OG strain with the delicious Cherry Pie. The former is a potent Indica-leaning bud with supremely relaxing effects that melt the face off. Meanwhile, the latter is renowned for its fruit-flavored terpene profile.

With a THC level of 16% to 19%, Pie Face OG is an impressively potent herb. While its recreational potential is heavily recognized, it remains medically viable as the same psychoactive compound contains multiple benefits.

Pie Face OG, in spite of its Indica dominant genes, has a quick-setting onset. Almost immediately after the first few puffs, a rush of euphoria swarms the mind. It leaves users feeling happy and ecstatic. Some even find themselves giggling for the simplest reasons.

As the high continues, a light pressure trickles down from between the eyes. It soothes each muscle until it is free of tension. Replacing it is a sense of deep relaxation that envelops the body. Slowly, a heaviness sets in the limbs. It makes staying awake a difficult task until, eventually, users have no choice but to fall asleep.

Because of its intensity, users who overconsume the strain will feel weighed down and may even experience a couchlock. In moderation, however, its bodily psychedelic effects are quite pleasant. Still, using Pie Face OG during mornings and afternoons is not the best idea due to its sedating qualities.

Pie Face OG smells very much like sweet cherries with hints of berries. A deep whiff, however, will reveal its subtle sour undertones of citrus enhanced by a floral tinge. Broken apart or combusted, it releases a pungent hash overtone.

Drawn in, Pie Face OG floods the palate with a fruity combination of cherries, berries, and citrus. Complementing it is an earthy flavor enhanced by hash which intensifies on the exhale.

Red eyes and a cottonmouth are two unavoidable reactions to marijuana. However, both are usually mild and often go away after a few hours. Though barely noticeable, the dry spell can cause discomfort for some users. In such cases, it is best to hydrate by drinking a few glasses of water.

What is avoidable, however, is a side effect known as greening out. Depending on the dose, the experience can range from a temporary dizziness, headaches, and subtle paranoia that last from a few minutes to at least 6 hours. For this reason, it is important to use marijuana with caution.

Pie Face OG’s psychedelic effects are beneficial for users in many aspects. For one, the behavioral changes it induces through its happy high makes it a great stress buster. In addition to that, it temporarily manages depression and similar health issues such as PTSD by appeasing symptoms such as anxiety and the feeling of hopelessness.

The same psychoactive compound also has analgesic properties that relieve various types of aches and pains beginning from the temples. Among its best uses, in fact, is related to easing sharp pangs in the stomach. In doing so, it encourages a hearty appetite especially in patients suffering from cachexia or food-related disorders like anorexia.

Through its powerful sedative properties, Pie Face OG allows users to rest. Not only that, it enhances both the quality and quantity of sleep so even those diagnosed with insomnia will not have a hard time drifting off to dreamland.

Pie Face OG is a sturdy strain with exceptional outdoor performance. Its thick stalks that can withstand strong gusts of wind while its branches do not break off easily from the weight of its heavy buds. Moreover, it has high resistance against problems caused by high levels of humidity such as mold or mildew.

Grown indoors, Pie Face OG rarely necessitates an early topping. Its short stature works to the advantage of people cultivating it in grow rooms. However, those with truly limited spaces may manage its height by ending its vegetative period early. Pruning will encourage better air circulation and allow light to reach lower-end branches. Cutting away dead parts of the plant will also distribute nutrients to healthier budding sites.

When it comes to mediums, soil is arguably the best choice since it brings out Pie Face OG’s full flavors. However, soilless mediums such as hydroponic systems produce cleaner buds at a faster rate.

Presently, Pie Face OG is only available in regular form. As such, aspiring growers need to plant more seeds and apply pre-germination methods such as soaking to ensure that more than half of the batch will be females. Meanwhile, Low-Stress Training will keep the calyx-filled plants from turning into hermaphrodites.

Pie Face OG has an indoor flowering period of 8 to 10 weeks. Once mature, it yields between 10 to 12 ounces of buds per square meter.

OutdoorsGarden grown Pie Face OG blossoms from the second to the last week of October. Growers usually harvest at least 12 ounces of buds per plant.

Have you ever smoked or grown your own Pie Face OG? Please let me know what you think about this marijuana strain in the comments below.