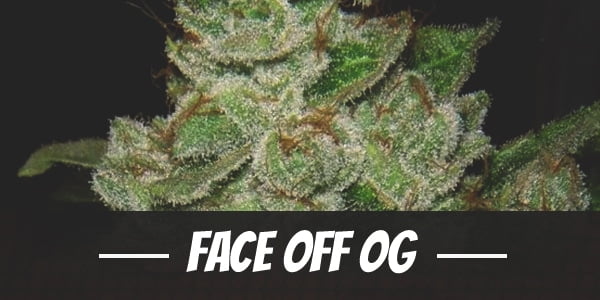 Face Off OG is profusely likened to the 1997 hit movie ‘Face/Off’ starring John Travolta and Nicholas Cage and for good reason. Like the film’s brilliant battle of wits and strategies, the strain stimulates the mind and allows its users to focus. But what happens once the heavy-hitting Indica effects take over? Suffice to say, the numbing sensation makes the face feel like its melting right off.

Information about Face Off OG:

Equally interesting is Face Off OG’s backstory. The 90’s classic is said to be one of the few original cuts from the first batch of OG Kush phenotypes. Its seed form was sent to a select group of breeders. One of which is Archive Seeds who later decided to create cuts from a mature female, also known as the ‘motherplant,’ to preserve its genes.

Testing up to 20% THC, the bud is no doubt powerful. Its skull-crushing buzz can easily overwhelm even the most seasoned of users. In moderation, however, Face Off OG is great for mid to late afternoons or early evenings that require just a little bit of work done before capping the day off.

Information about Face Off OG:

Despite being mostly Indica, Face Off OG has profound mental effects leaves users feeling happy from within. It is brought about by its initial euphoric onset. But, as it clears the mind, it also inspires a deep interest and propensity for completing tasks

It is not uncommon to see some users delving into projects for long periods of time especially as Face Off OG’s relaxing effects begin. Trickling from the temples is a tingling buzz that soothes the body. Though intense, it is kept at bay by the initial mental effects.

In time, however, it is replaced by a heaviness. It weighs the eyes and limbs down until, deeply comfortable, users eventually fall into a deep sleep.

Even from its amber container, one can tell Face Off OG’s scent is a sweet blend of sweet and spicy. After all, it’s high levels of THC does make it quite pungent. Taking a whiff, however, reveals notes of wet soil and pine.

Surprisingly, Face Off OG has a prominent citric flavor when drawn in. Complementing it is a woody but refreshing pine. On the exhale, its sweet and spicy herbal taste wash over the mouth.

Regardless of the strain, marijuana causes dehydration. It is likely that users end up with a cottonmouth and possibly red eyes especially with certain cannabinoids interfering with the production of moisture in the tear ducts. Those with experience usually ignore it for its mildness. Still, beginners may want to drink a glass of water before and after a pot session to appease the symptoms. At times, it may temporarily dizzy users.

Besides its recreational use, the psychoactive compounds in marijuana also have therapeutic benefits. Its high levels of THC, for example, have analgesic properties that provide a reprieve against body pain. And, with the anti-inflammatory components of CBD, it reduces swelling and redness.

Meanwhile, Face Off OG’s clearheaded high temporarily erases self-defeating and destructive thoughts that often plague users with depression, anxiety, and other mental conditions like PTSD. Additionally, its happy high enhances the mood and stabilizes it. As such, it may also be used as a stress-reliever.

Sleep accelerates healing and is an important regenerative process. However, it is often thwarted by chronic stress, stinging aches, and insomnia. By appeasing both, Face Off OG relaxes users until they are deep in slumber.

At the moment, Face Off OG is only available as a clone. As such, it requires the expert care and attention of a seasoned grower. They are a direct female ‘cut’ from the original ‘motherplant’ and do not need to be germinated. Instead, they are fed ‘pure water’ until their roots begin to grow. However, it requires previous successful experience as some beginners may overwater, overfeed their plants with nutrients, or accidentally expose them to too much heat or moisture.

As a clone, Face Off OG guarantees its growers a full female batch, a perfect replica of its mother’s DNA, and stable chemical compounds. However, they tend to be quite sensitive. As such, they are better suited for indoor growing. And, although they can be grown in soil, a hydroponic system will bring out its full potential and ensure it is clean. Growers may also apply the Screen of Green method and expose it to a 12/12 light cycle.

Face Off OG’s dense and leafy buds have an eye-catching tinge of lime. Its bright green colors are accented by amber hairs and a heavy coating of white, sticky trichomes.

Face Off OG flowers anywhere between 7 to 9 weeks and produces up to 12 ounces of buds per square meter.

Like other strains, Face Off OG thrives outdoors and typically blossoms by the late September to mid-October. Under the care of an expert grower, it yields more than 12 ounces of buds per plant.

Have you ever smoked or grown your own Face Off OG? Please let me know what you think about this marijuana strain in the comments below.

1 comments on “Face Off OG Strain”