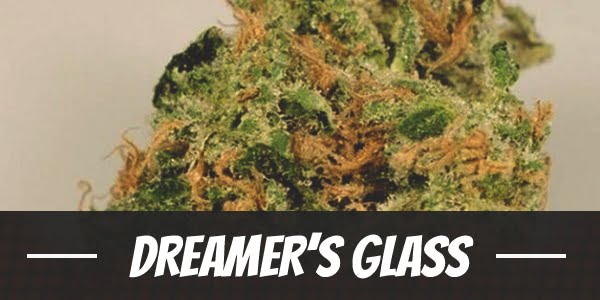 Dreamer’s Glass is a famous strain among cannabis enthusiasts. It is highly potent but equally therapeutic because of it’s 2:1 THC to CBD ratio. Adding to its flare is its interesting flavor of cheese, which many adore.

In creating the strain, its breeders crossed two premium Sativa-leaning buds. Glass Slipper is a Dutch hybrid with superb THC values that assures growers of an incredibly potent offspring. Meanwhile, its high CBD levels are likely from the elusive Casey’s Dream.

Regardless, their fusion resulted in one of the most sought-after hybrids for its long-lasting cerebral clarity. While it is not recommended for novices, beginners may still enjoy the strain with the help of a seasoned friend.

With up to 21% THC, Dreamer’s Glass is definitely fast-acting and potent. Typical of Sativa-leaning strains, its initial onset is marked by a euphoric rush that leaves users feeling happy from within. Some even find themselves giggling hard for the simplest reasons.

For the casual users, the clearheaded high paves the road to productivity. It allows thoughts to flow freely and, in doing so, inspires a creative surge. With an upbeat disposition, users tackle their tasks for the day with motivation and vigor.

But, after an hour or two, its equally powerful Indica effects creep in. Beginning from the back of the eyes, a tingling sensation trickles down and courses through the rest of the body. Replacing the knots in the muscles is a heaviness that is neither lethargic nor sedating. Instead, it relaxes the body and allows the users to complete their projects comfortably.

Dreamer’s Glass gives off the strong pungent aroma of cheese. It is evidently milky and sweet but musky. Once crushed or combusted, its undertones of damp earth permeate in the room.

Drawn in, its smoke is buttery and sweet. Enhancing it is a mild tropical flavor that truly brings out the tanginess of cheese. On the exhale, the hybrid’s creamy flavor is exchanged for a woody and skunky aftertaste.

Dehydration is a common reaction to marijuana. Most likely, users end up with eyes and a cottonmouth especially as cannabinoids block the production of saliva. Such effects usually go away with time but some beginners may find them a little uncomfortable. In such cases, it is best to rehydrate with water.

In large doses, Dreamer’s Glass greens users out. The symptoms often begin with temporary dizziness but, as one becomes keenly aware of their surroundings, it can heighten anxiety levels and trigger paranoia. As such, marijuana must always be paced and moderated.

Dreamer’s Glass has significantly higher levels of CBD than most recreational and medical strains. At up to 11%, it is enough to provide appease a variety of symptoms. But, with the added benefit of its potent THC and other cannabinoids like terpenes, it can provide a reprieve against a variety of mental and physical afflictions.

A deeply relaxing strain, Dreamer’s Glass has powerful analgesic properties that soothe the body through and through. Moreover, its energetic high reinvigorates the muscles and gets rid of overall fatigue, including one of its major symptoms, depression.

Seizures are characterized by involuntary contractions that are sudden, painful, and uncontrollable. Through its antispasmodic properties, Dreamer’s Glass calms the muscles and appeases the sharp stings that come with it. While this may be so, users should still seek the help of a health professional when attempting to self-medicate.

One of the best times to toke Dreamer’s Glass is an hour or two before a meal. This is because it stimulates a hearty appetite. It even encourages users with restrictive food disorders like anorexia.

Dreamer’s Glass boasts a Sativa structure. Its branches are thin while its stalks are tall. Similarly, its buds stretch out and taper on each. It is fluffy but dense because of it Indica influence.

On appearance, it is bright neon with flashes of amber. Coating it is a thick layer of silvery trichomes. But, aspiring growers can bring out its amazing purple hues. The plant will need to be exposed to shorter day cycles and colder nights. This will trigger the production of anthocyanin which contributes to the patches of purple on the buds.

Grown outdoors, Dreamer’s Glass thrives under the sun. However, unpredictable factors such as pests, strong winds, and sudden drops in temperature may hamper its growth. For this reason, many growers from the northern hemisphere cultivate their batch in controlled environments.

Typical of Sativa, Dreamer’s Glass has a long flowering period taking anywhere between 10 to 12 weeks. Still, many breeders prefer growing it for its abundant yield of up to 16 ounces of buds per square meter.

In a Mediterranean climate, Dreamer’s Glass flowers by the second or third week of October. But, at times, it may extend to the early November. Regardless, each plant produces more than 16 ounces of buds.

Have you ever smoked or grown your own Dreamer’s Glass? Please let me know what you think about this marijuana strain in the comments below.