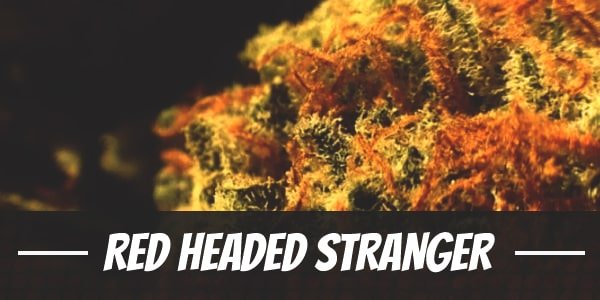 Willie Nelson is one of the most prolific users of marijuana. Because of how much he has smoked, there is even a running joke among enthusiasts that the country music legend ‘out smoked’ every single user in the world. This is baseless, of course, but it does show his strong love for marijuana.

As a tribute to his success as a musician and tribute to his advocacy, a strain was named after his critically acclaimed 1975 album ‘The Red Headed Stranger.’ Its namesake first appeared in 2011. It was among the many strains being sold in Colorado. Though popular in its own right, it had not left a dent in the industry yet. It finally broke through a year later after it was crowned ‘Best Sativa’ during the High Times Medical Cannabis Cup in Colorado. This win cemented the Sativa-leaning hybrid worldwide as among the best-energizing smokes.

Its unknown breeders fused together two phenomenal strains to create it – Willy’s Wonder and Haze. The latter induces a high energy, creative surge while the former is sought after for its heavy-hitting Indica buzz.

Their combination created a hybrid that, despite leaning towards Sativa, delivers a wondrous equilibrium of mental vigor and maximum physical relaxation. Making it even more attractive is its versatility. Though initially created for medical purposes, it shines through as a recreational strain for its high THC value.

Red Headed Stranger is undoubtedly potent. But, with THC levels of up to 26%, it is also fast-acting. Its initial onset, in fact, is similar to an instantaneous rush of euphoria. Almost immediately after the first hit, it delivers an uplifting buzz that leaves users feeling happy.

The clearheaded high helps casual users remain functional. It allows users to take on tasks with an upbeat disposition regardless of whether it is daunting or not.

In time, the tingling sensation moves down from the temples to the rest of the body. As it spreads, it reinvigorates each and every limb until the energetic buzz heightens the senses. And, together with the cerebral effects, it keeps users motivated to finish any mental or physical task. Used outside of one’s limitation though and it can be quite overwhelming.

Red Headed Stranger smells strongly of citrus with added herbs and undertones of spices. When broken apart, a tantalizing blend of cooling mint and refreshing pine permeate in the air.

Carrying over to its flavors is Red Headed Stranger’s citric taste. Drawn in, the zesty flavors of lemon and cooling mint reinvigorate the palate. Meanwhile, its undertones of freshly picked herbal spices and notes of mood leave a lingering aftertaste.

Marijuana always leads to dehydration, regardless of the strain. Most likely, users will end up with red eyes and, with cannabinoids interfering with the production of saliva, a cottonmouth. Seasoned users often ignore both symptoms due to their mildness. However, beginners may want to down a glass or two of water as it can get quite uncomfortable.

Being a potent Sativa-leaning strain, it is possible for Red Headed Stranger to overwhelm users – especially those with low tolerance to THC. In large doses, its clearheaded high can be dizzying and anxiety-inducing. Although rare, it may also cause slight paranoia. Regardless, both are easily avoidable through pacing and moderation.

Red Headed Stranger was purposively creative to cater to the needs of the medical community. And, to that end, it does not disappoint. Its high level of THC, in combination with its CBD and other chemical compounds like cannabinoids, provide a reprieve against a variety of mental and physical afflictions.

Its euphoric high, for example, does not only enhance the mood, it stabilizes it. In doing so, it relieves stress along with its symptoms including irritability, anxiety, and accelerated depression. In clearing the mind, it replaces destructive thoughts with newfound confidence.

When left unreleased, stress can also manifest in the physique. Through physical fatigue, in particular. It is a condition characterized by sore muscles, slowed reflexes, and chronic tiredness or sleepiness. By boosting energy levels, Red Headed Stranger effectively reinvigorates the body. The same psychoactive compounds also appeases the sharp, stinging pain of spasms.

Red Headed Stranger has the typical structure of a Sativa-leaning plant. Its tall stalks and thin branches necessitate early topping and Low-Stress Training techniques. The former will keep the plant short while the latter encourages lateral branching for better support. If space is truly a premium then shortening the vegetative stage is also an option.

There is no evidence to say Red Headed Stranger does not thrive outdoors. In fact, its yields are higher and its flavors are more delicious. However, it may not withstand strong winds or unpredictable changes in temperature. Because of this, many commercial breeders prefer cultivating their strain in controlled environments where factors such as lighting, temperature, and humidity are easily adjusted.

Though largely Sativa, its buds retain an Indica structure. Once mature, they develop into small but dense dark forest green nugs. Lining it are curled pistils that range from red to orange as well as an ample amount of milky trichomes.

At the moment, however, its original breeders have not made its seeds publicly available. This is understandable as the hybrid is classified as a medical strain. Still, growers may obtain a cut from a mature plant so long as it comes from a legitimate source.

After a lengthy flowering time of around 10 to 12 weeks, Red Headed Stranger yields between 12 to 16 ounces of buds per square meter. Although, applying the Screen of Green method will encourage even better yields.

Red Headed Stranger thrives in warm, sunny days similar to Haze. It typically blossoms around the second week of October to the first week of November. Once mature, it yields more than 16 ounces of buds per plant.

Have you ever smoked or grown your own Red Headed Stranger? Please let me know what you think about this marijuana strain in the comments below.