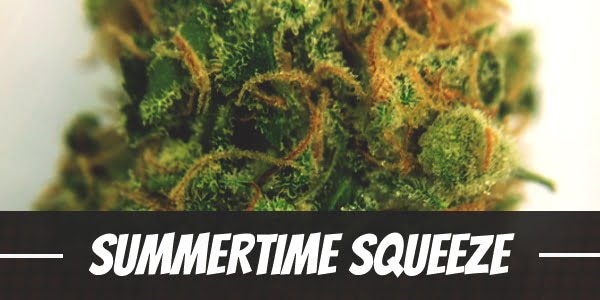 To this day, Summertime Squeeze remains shrouded in mystery. Its lineage, as well as its creators, have been protected by breeder secrecy since its introduction to the market. Regardless, many enthusiasts take to the Sativa-leaning strain for a day of productivity and fun.

With THC levels averaging between 14% to 17%, Summertime Squeeze is a versatile strain. It can be devastating to even the most experienced of users when consumed outside of one’s limits though. In moderation, however, its cerebral focused high improves perception and quite enjoyable. Moreover, its delicious tropical flavors have turned it into a real crowd favorite.

While it is impressive as a recreational strain, the bud provides comfort to medical users as well. Even just for a moment, its chemical compounds provide a reprieve against a variety of mental and physical afflictions.

Typical of Sativa, the initial onset begins with a euphoric rush that leaves users feeling in a sunny disposition. The clearheaded high is a godsend to most casual users who have work ahead of them. Stimulating the mind, it replaces unwanted thoughts with a free flow of groundbreaking ideas. More importantly, the creative surge inspires a genuine curiosity for producing innovative solutions. And, together with a sharpened sense of focus, it becomes easier to concentrate for longer periods of time.

Gradually, a mellow sensation ebbs down from the temples. Though just as intense as the initial onset, it does not hinder productivity. In fact, it also allows users to move around better just like a well-oiled machine.

To some, the subtle relaxation paired with the uplifting trail of thoughts is quite arousing. After all, it does take away both mental and physical inhibitions. A natural aphrodisiac, Summertime Squeeze is best toked with a loved one.

From the get-go, Summertime Squeeze’s citric overtones of lemon are apparent. But, undertones of wet soil make the bud seem like it had just picked off from the garden. Broken apart, a mild sweetness tantalizes the senses.

Summertime Squeeze is quite refreshing. If anything, it is similar to sipping a tropical treat from a lemonade stand. Enhancing its citric flavors are pulps of pineapples and sweet sugar. On the exhale, undertones of nut and pepper surprise the palate and linger even after the last toke.

Novice users and or those with low tolerance to THC may find themselves ‘greening out.’ This is usually characterized by a vivid awareness of one’s surroundings and subsequent paranoia. Such effects rarely happen. Still, it is best to pace and moderate one’s consumption of the strain.

More commonly, users experience dehydration while using marijuana. Cannabinoids interfering with the production of moisture usually affect the eyes and mouth the most. Thankfully, both are barely noticeable and usually go away with time. But, if symptoms continue to persist, users may down a glass or two of water to relieve the uneasiness.

Fatigue is characterized by feelings of mental and physical tiredness. It becomes an issue when it borders on over exhaustion. Usually, its symptoms include low energy levels, lack of motivation, sore muscles, slow reflexes, and irritability. To this end, Summertime Squeeze’s powerful Sativa effects, as well as adequate levels of THC, are beneficial.

On a side note, Summertime Squeeze also effectively reduces stress and mild to moderate cases of depression. Its mood-enhancing effects calm the mind and may be used as an anxiolytic.

Summertime Squeeze inherited an Indica structure. Its stalks and branches are both relatively short but thick. Its buds take on a similar form as well. They are shaped like grapes and completely dense. Its beautiful neon green hues are accented by golden pistils that twist and turn artfully. Blending everything together is its heavy coating of sticky amber trichomes.

What it did gain from its Sativa genes is its preference for warm, sunny weather. This is especially tricky for enthusiasts living in the northern hemisphere as summers are significantly shorter there. As such, many opt to grow their batch in controlled environments where deciding factors such as lighting, temperature, and humidity can be adjusted to mimic a Mediterranean climate. An added bonus is that keep plants safe from extreme weather and pests too.

One thing to note though is that its bushiness necessitates constant pruning. Besides keeping Summertime Squeeze looking beautiful, trimming the plant will help spread light and air evenly. It will also help the plant redirect its energy into producing more buds.

It usually takes Summertime Squeeze up to 12 weeks to fully mature. Once ready for harvest, it yields 12 to 16 ounces of buds per square meter. Seasoned growers, however, can shorten the flowering period to 10 weeks while increasing yields through certain growing techniques like the Sea of Green method.

In well-aerated gardens exposed to a decent amount of sunlight, Summertime Squeeze flowers before the end of October with each plant producing more than 12 ounces of buds. However, the flowering period can extend up to the first week of November depending on the climate.

Have you ever smoked or grown your own Summertime Squeeze? Please let me know what you think about this marijuana strain in the comments below.