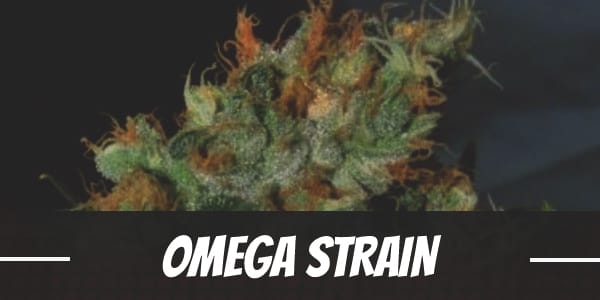 Omega is a well-balanced strain that, in spite of its popularity, is highly elusive. Its THC levels average at 26% with a head high during that brings users to soaring new heights. But, during the comedown, cradles users gently with a soothing body high.

Adding to its appeal is its impressive genetics, which is a four-way cross between White Widow, Afghani, Permafrost, and NYC Diesel developed by Rogue Seeds. From the first two, Omega gained its sturdy structure and heavy trichome production as well as its soothing Indica high. Meanwhile, the latter influenced its cerebral Sativa buzz.

Quick is a word that best describe Omega’s onset. It increases energy levels and rejuvenates users from within almost immediately after the first two to three puffs. The effects are also quite cerebral with many noticing a boost in moods. Spreading throughout the deepest recesses of the mind is a rush of euphoria. It uplifts spirits and leaves users feeling happier from within.

We don’t currently sell Omega seeds. Check out other hybrid seeds in our marijuana seed bank.

After about an hour or two, a tingling sensation ebbs down from the temples. It soothes the body and releases tension from each muscle. Replacing it is a subtle heaviness that, in spite of its intensity, is kept at bay by the strain’s initial mental effects.

Although Omega does not sedate users, its sheer potency can be quite overwhelming for beginners and will induce a couchlock when used in high doses or affect one’s ability to function. In moderation, however, it can be used during any time of the day because of its great wake-and-bake qualities.

Omega gives off an earthy smell with sweet citric undertones. Broken apart or combusted, it fills the room with the spicy aroma of crushed herbs and a cooling mint.

Carrying over to Omega’s flavor profile are its spicy, herbal undertones which are enhanced by its sweet earthy overtones. On the exhale, it leaves a cooling aftertaste of mint with interesting hints of citrus.

It is better to have a drink in hand while using marijuana. This is because cannabinoids have moisture-inhibiting properties of that interfere with the production of saliva and leave users with a cottonmouth. Some may also experience dry eyes while using Omega. Most usually ignore the symptoms due to its mildness however, those who experience discomfort may down a few glasses of water.

Omega can sometimes green users out, with many experiencing a combination of dizziness, headaches, and heightened anxiety. The effects are usually caused by overindulgence but can also be brought about by one’s disposition before the high. In such cases, it is best to pace one’s usage of the bud or keep away from it.

Omega has significant therapeutic value. Through the combined effects of its THC, CBD, and other cannabinoids, it relieves symptoms of various mental and physical afflictions so patients may feel at ease.

Its happy high, for example, provides comfort to users with mental health issues such as depression and PTSD. In a similar manner, it reduces stress by calming the mind and appeasing overwhelming dread.

A natural analgesic, Omega eases various types of aches and pains beginning from the temples. It also alleviates redness and swelling through its analgesic properties.

Omega is a relatively tall plant with a quick flowering period because of its mixed genes. Not only that, it has thick stalks and branches that are strong enough to carry the weight of its heavy buds and colas. At the same time, its sturdy structure has high resistance against strong gusts of wind and high levels of moisture.

Outdoors, Omega thrives best under the sun and with organic mediums like soil. It produces large, dense buds that are totally covered in sparkly resin. Not only that, it produces tasty buds. However, it is not protected against pests.

Many commercial growers prefer cultivating the strain in more controllable environments where factors such as temperature, humidity, and lighting are adjustable. It may need to be topped early to keep it short. Applying growing methods such as the Sea or Screen of Green, as well as Low-Stress Training, will bring out the hybrid’s full potential.

In controlled settings, Omega fully blossoms within 8 to 10 weeks. It yields between 12 to 14 ounces of buds per square meter once the flowering phase finishes.

Garden grown Omega flowers from the middle to the last week of October. Once mature, it yields at least 14 ounces of buds per plant.

What is the Omega strain yield?

Omega yields 12 to 14 ounces per square meter indoors and 14 ounces or more per plant outdoors.

How much THC does Omega have?

What are the origins of the Omega strain?

Omega was created from a mix of White Widow, Afghani, Permafrost and NYC Diesel.

Have you ever smoked or grown your own Omega? Please let me know what you think about this marijuana strain in the comments below.