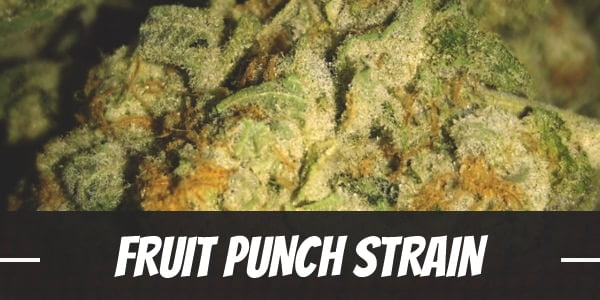 Skunk #1, Haze, and Northern Lights are all legends in the world of cannabis. Each are different in terms of structure. The first, for example, is a well-balanced hybrid while the latter are two pure strains that each lean toward different sides of the spectrum. However, all are distinguished for their distinctly incredible terpene profiles.

In combining the three, Heavyweight Seeds developed a sweet tasting strain that reminds almost everybody of juice. Fruit Punch, like its parents, is a high THC powerhouse. It is Sativa leaning but its potent effects are felt intensely in both the mind and the body.

Though widely regarded for its recreational high, Fruit Punch appeals to many medical users of marijuana. Its 1.2% CBD cements its position as a therapeutically valuable strain with significant mental and physical benefits.

Fruit Punch is a wonderful addition to any party. It boosts moods and calms the mind through a euphoric rush that takes users off the edge. Interestingly, the mental clarity sparks a sense of creativity that keeps profound thoughts flowing smoothly.

Gradually, an energizing buzz surges through the muscles. It invigorates the body and keeps users feeling upbeat throughout the day. The physical psychedelic effects, along with the intense mental stimulation, makes it the perfect companion for brainstorming sessions.

However, users may use it a few hours before a social gathering to take advantage of its impressive recreational effects. Not only does the Sativa-leaning herb uplift spirits, it also boosts confidence. It’s stimulating and happy high keeps a party going which makes it a great bud to share with friends.

But, at 22% THC, Fruit Punch may not be the best choice for inexperienced users. This is not to say beginners should stay away from the bud. Rather, that it should be used with caution or under the guidance of a seasoned friend.

One of the main selling points of Fruit Punch is its fragrance. Its sweet fruity and berry-like aroma makes it seem almost like dessert. Breaking up the buds or grinding them releases its undertones of pine and earth.

Equally appealing is Fruit Punch’s flavors which, in the palate, tastes like a refreshing tropical shake. When savored, its overtones of berries and undertones of citrus wash over the mouth. Complementing the largely fruitiness is a mild sweetness.

Experiencing a cottonmouth is not an uncommon occurrence when smoking Fruit Punch or any strain for that matter. Apart from that, users may also develop red eyes, which can sometimes be itchy, due to cannabinoids inhibiting the production of moisture in the tear ducts. Thankfully, both are minor setbacks that usually go away after a few hours but if symptoms persist, downing a few glasses of water will immediately relieve the dry spell.

In high doses, Fruit Punch can overstimulate the mind and raise anxiety levels or make users feel a little paranoid. Sometimes, people also get dizzy after toking the strain large amounts of the strain in a short amount of time. Practicing moderation, however, will keep such effects at bay.

Presumably, Fruit Punch caters to recreational users as that has been the outlook on marijuana for the longest time. Still, the strain is not without its pharmacological value. The combined effects of its cannabinoids like THC, CBD, and terpenes provide a reprieve against various kinds of mental and physical health issues.

Its mood enhancing high, for example, mitigates chronic stress which can lead to depression and other mental health issues if left unattended. As such, it can also be used as an anti-depressant that temporarily relieves symptoms such as overwhelming anxiety or turbulent emotions.

Stress can also manifest in the body as physical fatigue and a lack of appetite. However, through Fruit Punch’s reinvigorating effects and painkilling properties, the Sativa-leaning bud appeases various aches and pains in the body especially the stomach. For this reason, it is a great appetite stimulant for users with eating disorders like anorexia or those with cachexia. Meanwhile, its antiemetic qualities provide cancer patients with relief from the nauseating effects of chemotherapy.

Sativa-dominant strains are infamous for being lanky. In fact, many do not easily adapt to the colder climate of many countries located in the northern latitude. Not only that, its thin stalks and branches easily break off from either strong gusts of wind or the weight of its heavy buds. However, Fruit Punch breaks stereotypes with its hardy structure.

Tutti Frutti is a balanced hybrid with potent mix of effects that will make you feel happy and giggly. Read our full review!

Though it grows tall, Fruit Punch is not at all weak. It can withstand various problems such as sudden changes in temperature and will perform well regardless of its environment. In spite of its propensity for the constant sunshine common in Mediterranean regions, the Sativa-dominant herb flowers early and yields heavily in countries with cooler weather. Grown indoors, aspiring growers may need to top the plant early to keep it short as its height can reach up to 7 feet.

Luckily, Heavyweight Seeds has made Fruit Punch available in feminized form. There is even an autoflowering version of the strain. Both types assure growers of an easy grow as each produce all-female batches.

Fruit Punch should bloom by 8 weeks however, depending on the grower, the flowering period can be as short as 7 weeks or as long as 9 weeks. Regardless, it yields at least 21 ounces of buds per square meter.

In the northern hemisphere, garden grown Fruit Punch flowers from the last week of September to the second or third week of October. Once ready for harvest, it yields up to 35 ounces of buds per plant.

What is the Fruit Punch strain yield?

Fruit Punch yields 21 ounces or more per square meter indoors and Up to 35 ounces per plant outdoors.

How much THC does Fruit Punch have?

What are the origins of the Fruit Punch strain?

Fruit Punch was created from a mix between the Skunk #1, Northern Lights and Haze strains.

Have you ever smoked or grown your own Fruit Punch? Please let me know what you think about this marijuana strain in the comments below.