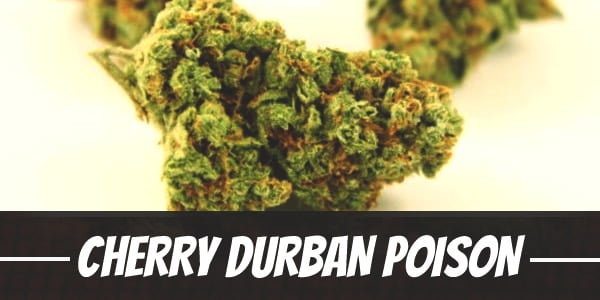 Named after the port city in South Africa from where it originated from, Durban Poison is a well-regarded high energy strain. Using it as a genetic base, breeders from all over the world has spawned dozens of hybrids, some of which have gone on to be quite prominent in the 420 community.

Not all modern hybrids, though, came as a result of selective cross or in-breeding. Among the famous examples are OG Kush and its phenotypes including Tahoe OG and SFG OG. In the same manner, one phenotype of Durban Poison took on a life of its own.

Unlike the mostly Sativa original strain, Cherry Durban Poison appears to be more balanced. And, as its name already implies, its scent deviates from the classic earthy tone to more flowery fragrance. It still boasts of the same intense mental stimulation but follows it up with deep relaxation.

It is not clear who should take the credit for its existence. Not only that but also because of the vagueness in its origin, it is not far-fetch to think that it could also be a Durban Poison crossed with an unnamed Indica. At any rate, what it comes down to are the recreational and medical benefits it offers.

Cherry Durban Poison is not exactly like its predecessor that slams into the head moments after taking a hit. Still, it acts quickly in inducing a euphoric cerebral high that is not only energizing but also clears up mental cobwebs. Besides clearing the mind, it also promotes the somewhat rapid flow of creative ideas and thoughts. In some instances, it could also take on a dreamy quality.

Once the physical effects begin manifesting, the uplifting sensation spreading throughout the body helps enhance the mood. Feeling reinvigorated and relaxed, some users may also find themselves aroused.

Using it as an aphrodisiac, though, might be short-lived. Cherry Durban Poison does not come lacking in that when overestimated, it can overwhelm the body. As a result, the initial motivation to be physically active may give way to the heaviness setting in the limbs. Depending on dosage and tolerance, some users might feel lazy while others could be locked on the couch lost in introspection.

As alluded to, Cherry Durban Poison has a sweet, delightful cherry aroma that blends with an earthy and flowery odor. While pronounced, it is not overly pungent.

Adding a tropical touch to the strain is a blend of cheery and pine. Its flavor profile is accentuated by a mix of mint and lavender. Upon exhaling the smoke, it leaves a sweet note.

Cheery Durban Poison contains up to 18% THC. In some cases, though, one could end up with slightly less potent buds. Regardless, overindulging is often the result of taking an extra hit or two. Should that be the case, then it might increase the anxiousness level of susceptible individuals.

At any rate, users should also expect to feel the mouth and eyes dry. In some cases, too, some people might have a slight headache.

The THC compound in Cherry Durban Poison is mainly responsible for the euphoric psychedelic effects. Its ability to uplift the mood can be put to good use by medical users. For instance, in ushering in the feeling of contentment and happiness, it makes dealing with depression manageable. Not to mention, that also makes it quite useful in wiping out stress.

Combined with CBD, the painkilling properties of this strain is also beneficial. As it soothes the muscles, Cherry Durban Poison also helps reduce or eliminate chronic pains.

One of its other beneficial use is in dealing with fatigue. The energizing buzz during the early stage allows users to fight off fatigue and finish tasks. Then, it helps people settle down as it induces a relaxing body high.

Growers have the choice of cultivating it indoors or outdoors. In either environment, it does need a bit more care than a typical cannabis plant. Hence, it may not be the best choice for first-timers.

Opting to grow it inside the house may prove to be a better option. Although it comes with more costs, it is a fair trade off for complete control over the growing conditions. Under expert care, it is possible to harvest 10 to 12 ounces per square meter after some 8 to 9 weeks of flowering.

In the outdoors, the plant thrives best in a warm climate where there is ample sunshine. Harvest time usually falls between the third to fourth week of October with each plant producing at least 12 ounces of flowers.

What is the Cherry Durban Poison strain yield?

How much THC does Cherry Durban Poison have?

What are the origins of the Cherry Durban Poison strain?

The exact origins of the Cherry Durban Poison strain are unclear, but it is believed to be the result of a cross between Durban Poison and an unknown indica strain.

Have you ever smoked or grown your own Cherry Durban Poison? Please let me know what you think about this marijuana strain in the comments below.