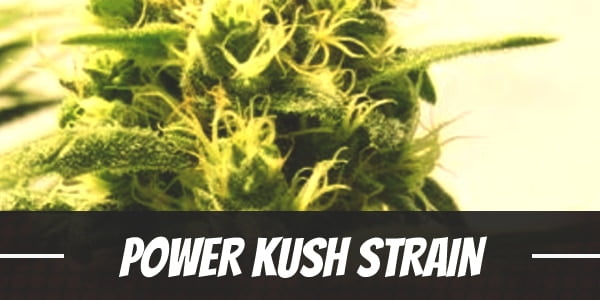 For decades, Amsterdam is the consensus cannabis capital of the world. Regardless of its legality, it is also here where Power Kush entered the scene and made a name for itself. The strain, already popular in cafes, has started to make its way not only across the continent but also in other parts of the world.

It will not be long before its buds are also available for sale in dispensaries in the USA and other areas where it is legal. Meanwhile, several seed banks and online retailers are offering its seeds for any who wishes to add it to their collection.

As its name implies, it comes with the power to energize users, but it also uses that same potency to settle down the excitement. While balanced, it leans a little more to its Indica side during the comedown. Fortunately, it is not one to cause a couch-lock.

Dinafem Seeds has been around for a while and has created some of the better strains in the world. One of their originals is Power Kush. The hybrid traces its genetic lineage to two of the most prominent strains that the world has ever known – Skunk No. 1 and the landrace Afghani Indica.

What they did was to create first generation seeds from the originals. Using the best of those S1 seeds, they crossed the two plants to create a new hybrid. From Skunk, it inherited its uplifting and energizing buzz. Meanwhile, it also took the relaxing traits of the Afghani strain.

Power Kush is a moderate strain in that it mildly delivers its effects. However, that does not mean it is not potent. In fact, it does contain an average of 16% to 19% THC. As such, one can expect to get a solid hit with its use.

Upon using, the strain sends an energizing buzz that lifts the mood of its users. Wiping away stress, it then induces some people to feel not only happy but elated. Often, the onset of the effects also comes with a clearer mind and better ability to focus. Such is typical Sativa traits.

Where it differs from many others, it does not cause a foggy mind. It also does not overwhelm users with narcotic like effects. Having said that, some people may make the mistake of using too much. In that case, then, some unwanted side effects may become pronounced.

At any rate, Power Kush works its way to the body. At this point, most people start to settle down from their excitement at the onset of the mental high. Completely relaxed, some opt to call it a day although it will not cause a couch-lock.

The strain can generally be used at any time of the day or night. Consumed in minimal amounts, it can be conducive to being more productive or efficient.

As soon as one catches a hint of Power Kush, a reminder of its Skunk lineage becomes evident with its musky and skunky odor. Accompanying this is a citrusy undertone that adds to its pleasant smell.

Much of its aroma is also detectable in its flavors. However, it does have a more pronounced taste of coffee and berry thrown into the mix. This cocktail of flavors should appeal to most people.

Power Kush can come charging in and squash stress, but it is also not without its adverse effects. In particular, it can cause users to feel paranoid. If that is an issue, especially when one is dealing with anxiety, then avoid using this one.

Other adverse effects include dry mouth and eyes. Such is considered to be normal as all types of cannabis can cause that. It manifests itself, including any other possible reactions, when one overuses.

As mentioned, Power Kush is good at wiping away stress. It does with by combining the uplifting effects of its Sativa side, and the relaxing effects of its Indica side. As a result, people can also use it to help them deal with depression. Again, keep in mind that this is not a good one to use for managing anxiety.

Physically, one benefit of using Power Kush is that it provides pain relief from different chronic illnesses including muscle spasms. Such is the reason why activists, for decades, has been lobbying governments around the world to legalize its medical use. Although the energizing buzz can help people deal with fatigue, it can also be negated by the relaxing body effects.

Cultivating marijuana is one of the joys of life, for cannabis users, that is. As such, many people have started their own indoor growing space. Power Kush, though, can grow outdoor or inside the house equally well.

In the open, it can grow tall at up to 10 feet tall. It seems to prefer a warmer climate and should not be that difficult to tend to. Still, it does require some work and a little bit of past experience will be ideal.

U2 Kush is a sour and sweet smelling plant that is popularly used for the treatment of patients, but also recreationally. Read our full review!

Inside the house, growers can use soil as the medium or hydroponics. Using the Sea of Green training method will improve its growth rate and yield.

Power Kush is ready for the next phase of its growth by the seventh week. Depending on the grower, one may choose to extend this by another week before triggering the change. Once it is ready for harvesting, each square meter of the plant can produce up to 19 ounces of resin covered buds.

Tended to by experienced growers, the plant can produce up to 38 ounces. It starts its flowering stage sometime between September and October.

Have you ever smoked or grown your own Power Kush? Please let me know what you think about this marijuana strain in the comments below.