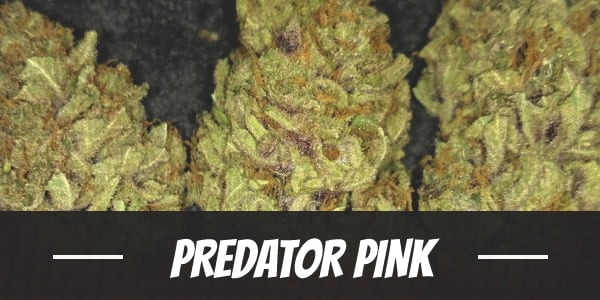 Predator Pink is one of the rarest strains in the cannabis industry yet also among the most sought after. After all, some of its phenotypes produce pink to light red buds with purple pistils that are uncommon in a sea of green nugs. And, when smoked, delivers a stimulating high with a totally relaxing buzz.

Creating such a uniquely-tinted bud was not an easy task. Its breeders, Exotic Genetix, had to search for a strain with phenotypes that produced pink hues naturally. To this end, Plushberry was the perfect answer. It was later paired with Starfighter to enhance its Indica effects but maintain its cerebral buzz.

Predator Pink has THC levels that range from 14% to 17% which makes it very buildable. As such, both beginners and seasoned users may enjoy the strain. Its initial onset, in fact, is characterized by a euphoric rush that leaves people feeling happy from within.

To most casual users, Predator Pink’s mood enhancing effects inspire a surge of creativity. A day of work is no longer dull nor dreary but rather productive and filled with ideas, especially as the stimulating buzz clears the mind. Moreover, the keen awareness allows users to concentrate for longer periods of time.

Gradually, a tingling sensation trickles down from the temples in waves. It soothes the muscles and envelops the body in total relaxation so users may move around easier. For this reason, Predator Pink may be used before in the late afternoon or early evening while finishing work.

Predator Pink smells of freshly picked berries. However, its sweetness is only mild compared to the overtones scent of damp soil.

Drawn in, Predator Pink floods the palate with a tropical fruit-flavored smoke. Complementing its candied sweetness is the taste of berry tea. On the exhale, an herbal aftertaste lingers even after the last hit.

Dehydration is a common reaction to marijuana. After all, certain cannabinoids do inhibit the production of moisture. Most likely, users end up with a cottonmouth and red eyes. Neither are a cause for concern as they tend to be mild and often go away with time. Still, users may opt to hydrate with water before, during, and after a session.

In huge doses, Predator Pink may lead to a condition called ‘greening out,’ a side effect that is largely characterized by dizziness that can temporarily trigger anxiety and paranoia. While one’s disposition before the smoke is a factor to its likelihood, so is individual tolerance. As such, marijuana must always be used in moderation.

Presumably, Predator Pink was created with a recreational purpose in mind. After all, that has been the assumption of many, whether rightly or wrongly, about marijuana. Still, the strain is not without its pharmacological benefits.

For one, Predator Pink is a natural mood enhancer. Its high levels of THC induce a happy high that give it the ability to temporarily appease symptoms of depression as well as other mental illnesses like PTSD.

On the other hand, the hybrid can also be used as a stress reliever or anxiolytic. In clearing and organizing the mind, it also calms the fast-paced thoughts of a person ridden with anxiety. The same psychoactive compounds also encourage a hearty appetite. As such, one of the best times to use the bud is a few hours before the meal.

Meanwhile, its analgesic properties naturally soothe all kinds of pains and aches beginning from the temples. Freed of any physical tension, medical users eventually fall into a deep, unencumbered sleep.

Predator Pink is a limited-edition strain that has since been discontinued by Exotic Genetix. However, aspiring growers may still acquire clippings from a mature plant. So long, of course, as they verify its validity.

With that said, Predator Pink is quite an easy grow. A sturdy strain, it can withstand various changes in weather, temperature, as well as problems caused by humidity such as molds or mildew. However, pests may be a problem. For this reason, many commercial growers prefer cultivating their herb in controlled environments where they can easily adjust factors to help the plant grow to its fullest potential.

Once mature, Predator Pink usually produces dense green-colored buds. However, some of its phenotypes turn pink with hues ranging from pastel to fuchsia. Equally stunning are its purple pistils that are coated in a blanket of silvery trichomes.

Indoors, Predator Pink flowers within 7 to 8 weeks. Once fully mature, each square meter yields up to 12 ounces of buds. Applying the Sea of Green method, however, will encourage even better yields.

Garden grown Predator Pink usually blossom by the end of September to the first week of October. It produces more than 12 ounces of buds per plant but, under the expert care of a seasoned grower, can yield more.

Have you ever smoked or grown your own Predator Pink? Please let me know what you think about this marijuana strain in the comments below.