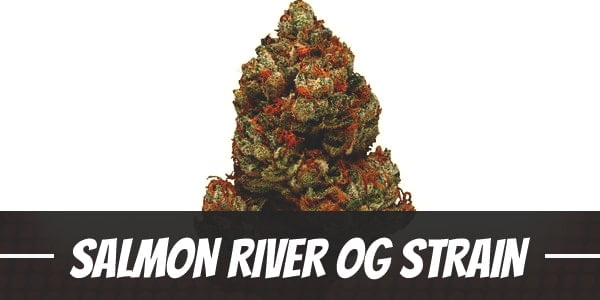 Salmon River OG is a highly potent strain. With THC levels averaging between 17% and 24%, drawing in its complex flavored smoke can be quite intense and overwhelming. In moderation, however, it delivers a pleasant soothing cerebral onset and a sedating comedown.

In creating the strain, Dynasty Genetics took Pre-98 Bubba Kush for its incredible growth profile as well as impressive recreational high. To enhance its medicinal potential, the breeders then added Blue Heron.

Though widely appreciated for its recreational buzz, Salmon River OG is a great strain to use to release any of the stress accumulated throughout the day or week. At the same time, it delivers a tranquilizing body high that significantly reduces aches and pains all over the body.

Salmon River OG is a powerful Indica-leaning strain. In spite of this, it is a slow-starter whose effects do not begin until 15 minutes after the first two to three puffs. With that said, users should ensure to stay within limits or moderate use for a pleasant high.

Its onset begins with a rush of euphoria to the head that uplifts the mood. It brings back lost smiles as users start feeling lighter as a precursor to the upcoming Indica high. It leaves one feeling upbeat as the cerebral buzz persists.

Gradually, after about an hour or two, a soothing sensation oozes down from the temples. It reinvigorates the muscles gently while removing tension in its wake. A heaviness in the limbs gradually begins to weigh the body down. In all likelihood, users will want to lounge around a couch or flop on the bed to relax. As the Indica buzz persists, users eventually fall into a deep asleep.

Overall, Salmon River OG is a soothing bedtime companion that puts users to sleep after thoroughly relieving the mind and body of stress. It is best used at night as it can be quite unproductive during the daytime.

Taking a whiff of Salmon River OG is like sipping a hot drink at a camp. Its overtones of coffee and chocolate are accentuated with the aroma of damp soil. Hints of sweet lemon and spicy herbs permeate in the room upon breaking apart the buds. A sour diesel gradually takes over upon combustion.

Salmon River OG has a complicated flavor profile. A single swig introduces the palate to its herbal spiciness; however, drawing its smoke for the second time reveals its chocolate and coffee undertones. On the exhale, it leaves an aftertaste of wet soil blended with sour lemon and a tinge of gasoline.

Cannabinoids often interfere with the body’s ability to produce moisture. As such, it should come as no surprise that users experience red eyes and a cottonmouth while smoking Salmon River OG. At times, it can also come with a temporary headache or subtle dizziness that can last for hours. Although the effects are usually ignored due to its mildness, users may manage the dry spell by downing a few glasses of water throughout the day as well as avoiding caffeinated and alcoholic drinks.

Stress relief is one of the top reasons that users cite when asked about cannabis usage. To this end, Salmon River OG is just as effective. It reduces stress levels by inducing its happy high which uplifts the mood while calming the overwhelming dread or anxiety that comes with work or fatigue. At the same time, it also manages symptoms of depression and other mental health issues like PTSD.

In high levels, THC turns into a natural analgesic that addresses various types of aches in the body. It relaxes the muscles to prevent it from suddenly contracting then causing pain. Through a similar mechanism, it reduces the queasy, gut-wrenching feeling patients get from nausea. Its antiemetic properties is also a source of comfort for cancer patients dealing with the strong side effects of chemotherapy.

The soothing relaxation eventually cradles users to a deep, unencumbered sleep. Its sedating properties not only increase the quantity of sleep but also enhance its quality, so one wakes up feeling invigorated the next day.

Salmon River OG is a stable frame that showcases positive attributes of Indica-leaning plants. It has a sturdy frame with thick stalks and branches. Because of this, it can withstand a variety of unpredictable growing factors such as strong winds, short days, and fluctuating temperatures.

There are three phenotypes that growers can expect from Salmon River OG. The first leans toward the Pre-98 Bubba Kush and is a quick-flowerer. Meanwhile, the other grows more like Blue Heron in that it takes longer to blossom. However, it has the sweetest terpene profile and the highest medicinal effects.

Regardless, each has a propensity for a cool and dry climate with a good amount of sunlight. For this reason, growers can cultivate the plant without problems in the northern hemisphere. However, one should install a temporary enclosing during an early frost as it can kill the plant.

Indoors, growers do not need to top the plant early. However, it will need to be pruned often as it can get quite dense. If left unattended, it might inhibit aeration and light circulation in the lower nodes and turn moisture into mold or mildew.

The Sea of Green works best with Salmon River OG. It takes advantage of its short stature by placing plants nearer each other to maximize space. Pairing it with a hydroponics setup will significantly improve yields as it delivers nutrients directly to the roots. For better flavors, users may opt for soil instead.

Like other Indica-leaning strains, Salmon River OG has a short indoor flowering period of 7 to 9 weeks. It yields an average of 10 to 12 ounces of buds per square meter but, for seasoned growers, it is possible to harvest more.

In the northern hemisphere, Salmon River OG fully matures between the last week of September to the middle of October. Each plant is expected to produce at least 12 ounces of buds.

Have you ever smoked or grown your own Salmon River OG? Please let me know what you think about this marijuana strain in the comments below.