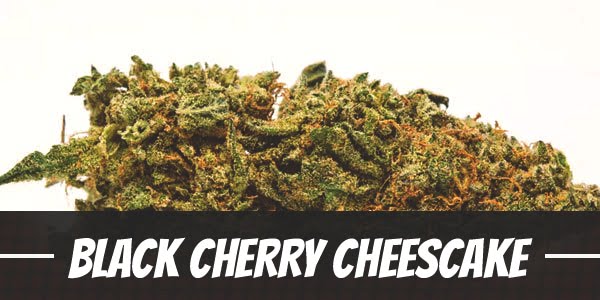 A puff of Black Cherry Cheesecake is enough to bring one’s bright smile back. Its THC levels, which peak at 21%, induce a soothing euphoria from head to toe that clears away all the accumulated stress. Similarly, its profound high provides comfort to medicinal marijuana users.

In creating the strain, its creators used Black Cherry Soda for its delicious fruit and soda terpene profile. It also has a deep purple hue that borders on black. From Super Silver Haze, it gained its uplifting head high and upbeat recreational effects. Meanwhile, Cheese fortified its structure and improved its growing profile. Not to mention, it added a little bit of flavor too.

Despite the information, Black Cherry Cheesecake remains a highly elusive strain. Since its release, its breeders remain a mystery. And, as such, growers can only get a hold of clones instead of seeds.

Like other Indica-leaning strains, it is a slow starter. Usually, the behavioral change that its gentle buzz of euphoria brings does not begin until after 15 to 20 minutes has passed since the first puff. It delivers a happy high at the onset that leaves users feeling upbeat throughout the day. In enhancing the mood, it turns downturned frowns to upturned smiles.

The mental stimulation also brings back the appetite. Thus, it is better to have some snacks nearby before the body high begins. In this way, users can save time from having to go to the kitchen to prepare some food.

During the comedown, which is after about an hour or two, a soothing sensation rushes from the temples and through the muscles. It calms tensions and blankets the body in deep relaxation. In spite of its intensity, it does not lock users to the couch or make the eyes droop until one falls asleep.

With that said, users should start with low dosages as it can turn an otherwise pleasant high into an overwhelming sensory buzz.

Black Cherry Cheesecake, as one would expect, has a sweet sugary scent. Breaking apart the buds reveals its fruity overtones of berries and cherries which intensify upon combustion.

In the mouth, Black Cherry Cheesecake explodes with sweet sugary flavors that entice the palate. Accentuating are its notes of berries blended with cherries which leave a fruity aftertaste on the palate.

Apart from the usual dry eyes and cottonmouth, users may also green out while using Black Cherry Cheesecake. It is characterized by a keen awareness that can cause dizziness or trigger anxiety especially in people who are prone to the condition. Although the effects are mostly confined to a headache, it is still better to start with low dosages.

Black Cherry Cheesecake delivers a happy high that improves moods and uplifts tired spirits. Meanwhile, its soothing euphoria calms the fast-paced thoughts commonly associated with stress, overwhelming dread, and anxiety. Hence, it can also be used as an anti-depressant to manage symptoms of depression and other mental health issues like PTSD.

In high levels, THC turns into a natural analgesic that tranquilizes various types of aches and pains in the body beginning from the temples. The same psychoactive compound also stimulates the appetite. It appeases any contractions in the gastrointestinal tract that prevent one from enjoying a meal. For this reason, it can be a food companion to patients dealing with cachexia as a result of disease or eating disorders like anorexia.

Its muscle relaxing properties also relieve turbulence in the stomach that can lead to vomiting. As such, it is a source of comfort to cancer patients dealing with the nauseating effects of chemotherapy.

Black Cherry Cheesecake takes on the usual appearance of an Indica-dominant plant. A breeze does not easily sway both its branches and stalks. Neither do the two droop or break off at the weight of its heavy buds. In addition to that, it is a sturdy strain that can withstand various unpredictable factors like strong winds, fluctuating temperatures, and changing weather.

It fares well in the northern hemisphere where the weather is cold. However, it is better to invest in a temporary enclosing that growers can install during early winters as the snow can kill the plant overnight. Placing the herb in pots will also make moving it indoors easier. With that said, one should prune it to improve light and air circulation in the lower nodes.

The Sea of Green works best for Black Cherry Cheesecake. Its compact structure allows growers to place it close to maximize space. Having more plants encourages the creation of more budding sites. Pairing it with a hydroponics setup also hastens the flowering period while significantly improving yields. Soil is also another option concerning growing mediums. It enhances the overall terpene profile of the bud for fragrance and flavor.

Once ready for harvest, Black Cherry Cheesecake produces olive green buds with flashes of gold pistils. Growers can bring out its deep purple hue and pink hairs by lowering the temperature or harvesting it around fall as the temperature drops but before the snow falls.

Indoors, Black Cherry Cheesecake has a short blossoming period of 7 to 9 weeks. After the wait, growers are rewarded with 10 to 12 ounces of bus per square meter.

Black Cherry Cheesecake flowers from the last few days of September and fully matures around the second or third week of October. It yields at least 12 ounces of buds per plant.

Have you ever smoked or grown your own Black Cherry Cheescake? Please let me know what you think about this marijuana strain in the comments below.