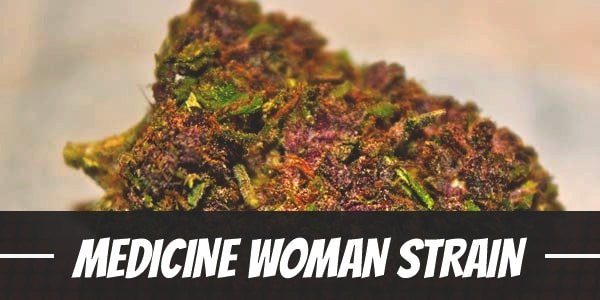 Love makes people do many things including creating one of the most therapeutically viable strains. Such was the case of David Verstoppen, a renowned Oregon medical cannabis grower whose heart hurt at the sight of his wife suffering from the pain brought about by her fibromyalgia.

Medicine Woman is a Sativa-leaning strain that has brought temporary relief a variety of disorder and disease. It has high levels of THC and CBD that lend itself to patients dealing with health issues. Not only that, its soothing head high and tranquilizing body buzz help users take the mind away to a pleasant place.

Medicine Woman is a fast-acting strain. Its effects begin almost immediately after the first two to three puffs. And, with THC levels of up 23%, it is undoubtedly among the most potent. Because of this, it is important for users to pace consumption of the buds. Otherwise, it can turn a pleasant high into an overwhelming experience.

With that said, its head-slamming onset is marked by a rush of euphoria that clears the mind. It inspires an innate sense of happiness that uplifts the mood.

For casual users, the upbeat disposition creates free space for thoughts to flow and form freely. It inspires groundbreaking ideas while renewing one’s motivation for work. Meanwhile, the mental clarity helps one stay focused while completing projects or tasks.

After about an hour or two, the same uplifting buzz begins to trickle down from the temples. It unties knots in the muscles and relieves tension in the body. Like a well-oiled machine, enthusiasts go through assignments productively through the day. Gradually, a heaviness plants itself in the limbs that eventually leads to users feeling drowsy.

In spite of its great wake-and-bake qualities, Medicine Woman is still best used on days off or on a lazy afternoon. Its initial head high is eventually overtaken by a heavy-hitting body buzz that leads to sleep. Still, if needed, one can use the strain in the morning so long as it is kept in moderation.

Like other CBD-enriched strains, Medicine Woman boasts a strong earthy scent reminiscent of wet soil. It has notes of refreshing pine accentuated by a tinge of sweet skunk. Broken apart or combusted, a sour diesel smoke rises enhanced by a citric undertone.

In the palate, Medicine Woman bursts with a sour overtone of diesel mixed with citrus. Tranquilizing it is the soothing taste of skunky earth. On the exhale, it leaves a sweet but refreshing aftertaste of woody pine.

Users usually experience a cottonmouth while using Medicine Woman as a result of cannabinoids interfering with moisture production. At times, it is accompanied by red eyes and an itchy throat. Though most people ignore the dry spell, it can be mitigated by downing a few glasses of water throughout the day.

Greening out is another possible outcome that comes with using Medicine Woman. The keen awareness, as well as the heightened senses, can trigger anxiety which can develop into a subtle feeling of paranoia if one continues to use the strain beyond limitations. For this reason, users should start with low dosages.

Medicine Woman is a highly therapeutic strain. Its CBD levels, which average at 5%, provide relief to patients dealing with a myriad of mental and physical afflictions with the help of its other cannabinoids like THC. As such, it remains valuable to users from the medical marijuana community.

Its cerebral onset enhances the mood and uplifts tired souls. At the same time, it calms the mind of the overwhelming dread that comes with either stress or anxiety. For this reason, too, it is a source of comfort to patients dealing with mental health issues like depression and PTSD.

The Sativa-leaning bud also has soothing physical properties that appease various aches and pains beginning from the temples. It relaxes the muscles to prevent it from suddenly contracting and causing cramps. Meanwhile, its anti-inflammatory properties reduce redness and swelling.

Medicine Woman grows very much like a Sativa. It is tall with lanky stalks and thin branches that can easily break when fazed by strong winds. Because of this, many growers opt to cultivate the plant indoors.

A controllable environment also allows growers to adjust factors like temperature, humidity, and lighting to enhance its cannabinoids, especially its CBD levels. It may need to be topped early to keep it short though. Otherwise, it can cramp up space and inhibit the circulation of light and air.

The Screen of Green brings out Medicine Woman’s full potential. It brings up the lower nodes, so it receives ample light and creates abundant budding sites. Pairing it with a hydroponics setup will also hasten its flowering time and significantly improve yields by delivering nutrients directly to the roots. Growers may also opt for soil as a medium for better flavors.

As a tropical strain, Medicine Woman thrives best in a warm, Mediterranean climate. It likes to bask under the light in long sunny days. This is not to say the plant will not thrive in the northern hemisphere. On the contrary, it performs just as well, but it may take a longer time to flower compared to its Indica counterparts. With that said, it is essential to prepare a temporary enclosing that will protect it in case of an early frost.

Making up for its weak structure, though, are its huge airy buds with a stunning deep emerald hue and flashes of fiery pistils. In the palm of one’s hand, its glistening trichomes leave a sticky trail of resin.

TIP: Looking to buy seeds like Medicine Woman? Check out our seed bank

Medicine Woman has an indoor flowering period of 10 to 12 weeks. Growers can expect it to yield between 12 to 16 ounces of dried buds per square meter. Under the expert care of a seasoned grower, however, it can produce much more.

In the northern hemisphere, Medicine Woman blossoms from the last week of October to the second or third week of November. It produces at least 16 ounces of buds per plant once ready for harvest.

Have you ever smoked or grown your own Medicine Woman? Please let me know what you think about this marijuana strain in the comments below.