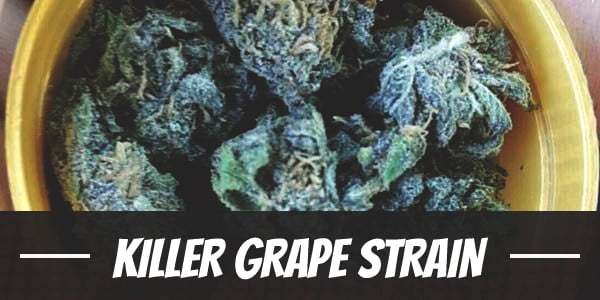 TGA Genetics has hands on a fine Killer Queen cut from Vic High. Still, the company wanted to improve it by tightening its nodes and enhancing its flavor. The breeder also sought to bring out its eye-catching purple hues.

To do this, TGA Genetics needed an exceptional strain intense lavender and violet hues. And what better choice is there than Querkle, a strain with a berry-flavored terpene profile? Not only that, the Indica-dominant bud has is a great addition in the grow room.

It would be safe to say that Killer Grape is an improved version of its Killer Queen parent. It boasts a strong grape and berry flavor that, when drawn, ushers in a euphoric high that remains functional even after each puff. The well-balanced hybrid also exhibits the structural prowess of its two parents as well as their stunning colors with a thick frosty layer of trichomes.

Though its up to 20% THC is mostly used for recreation, Killer Grape can be used as a medical strain too. It induces a head to body high that appeases various afflictions while providing a temporary reprieve to patients.

Killer Grape does not overwhelm users with a head-slamming high in spite of the fact that it is a fast-acting strain. Once its euphoric high begins after the first few puffs, users immediately feel an uplifting mood boost.

It is not uncommon to see users radiating with happiness during the initial onset. Smiles are wider and so much brighter. A great party strain, it brings out the giggles in a gathering of friends or boost self-confidence at a party.

While some prefer to use the mental stimulation for senseless conversations, many casual enthusiasts with work ahead take advantage of the boost in energies. It renews motivation and keeps one from feeling tired while completing tasks. At the same time, it enhances focus so users concentrate on tasks better for longer periods of time.

As the hours pass, an uplifting wave ebbs down from behind the head as a light pressure that gradually intensifies. It soothes each muscle in the body, kneading it like a masseuse. Though powerful, it does not all induce a couch lock. Instead, it removes tension so users move freely without inhibition.

Killer Grape has a strong pungent scent due to its potent levels of THC. It has the strong notes of grapes that entice just about any user who comes in contact with it. It is later accentuated by the scent of apples which, once grinded and combusted, releases spicy and herbal notes.

Drawn in, Killer Grape tastes like a bowl of mixed fruits with a large ratio of grapes. Enhancing it are notes of sweet apples as well as a subtle touch of earth that make the bud seem freshly picked. On the exhale, it leaves a rather spicy note of herbs.

Killer Grape, like other strains, has moisture-inhibiting cannabinoids that interfere with the production of saliva. Apart from a cottonmouth, users also commonly experience dry eyes. Both are mild and barely a cause for concern but, if symptoms persist, one may down a few glasses of water while staying hydrated throughout the day.

It is not uncommon for one to become dizzy while using Killer Grape as well. In especially high doses, the disorientation can spike up levels of anxiety that eventually develop into a subtle feeling of paranoia. Refraining from overindulging in the strain, however, will keep such effects at bay.

As a well-balanced hybrid, Killer Grape has cannabinoids that provide patients with a reprieve against a myriad of afflictions. It is particularly effective against stress, which can develop into serious health issues such as hypertension or hasten the onset of depression if left unattended.

Its calming euphoria busts out stress while its anxiolytic properties appease the overwhelming dread. Because of this, Killer Grape can also be used as a anti-depressant to manage symptoms of depression and PTSD. Before self-medicating, however, it is best to consult a physician.

The same stimulating effect also encourages a hearty appetite. Using it a few hours before a meal will have users grabbing a bite of scrumptious food. As such, it provides comfort to patients suffering from eating disorders as well as cachexia.

In high doses, the psychoactive also turns into a natural analgesic that reduces redness and swelling while eliminating inflammation. Meanwhile, its soothing sensation appeases various aches and pains from all over the body.

A great beginners strain, Killer Grape has the sturdy structure of an Indica. It has a strong resistance against a variety of environmental issues such as fluctuations in temperature. Moreover, its thick stalks and branches do not break easily either due to strong gusts of wind or to the heavy weight of its buds. For this reason, growers may cultivate the strain indoors or out.

However, its Sativa genes are evident in its tall height. And, for this reason, it will need to be topped early as well as pruned. TGA Genetics, in particular, advises breeders to top it a few times to encourage lateral branching. Cutting away dead parts of the plant will encourage better circulation of light and air in the lower nodes, as well as nutrient distribution in healthier parts.

Because of its perfectly split genes, Killer Grape adapts easily to the Sea and Screen of Green method. To bring out its stunning purple hues, growers will have to exposed the plant to cool nighttime temperatures during the flowering period.

At the moment, TGA Genetics has only made feminized seeds of Killer Grape available. As such, users will need to use pre-germination methods to improve the chances of getting a female. Low-Stress Training, on the other hand, will keep it from turning into hermaphrodites.

It does not take long for Killer Grape to mature in controlled settings. Within 7 to 9 weeks, it yields 12 to 14 ounces of buds per square meter.

In the northern hemisphere, Killer Grape flowers from the last week of September to the middle of October. Once ready for harvest, it will yield at least 14 ounces of buds per plant.

Have you ever smoked or grown your own Killer Grape? Please let me know what you think about this marijuana strain in the comments below.