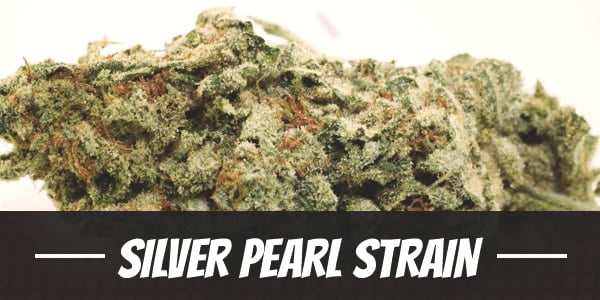 Off the coast of Palawan in the Philippines, a fisherman found a 75-pound pearl inside a giant clam. He decided to keep it in his home as a good luck charm. Where did he place this treasure? Under his bed. Fast-forward some ten years later, that same pearl is valued at $100 million. Let’s not kid ourselves, if we owned that pearl, then we would be on cloud nine all the time.

But that is not how fate intended it, so the best we can do, the closest we can come to that experience is the Silver Pearl, instead. With this cannabis strain, users are guaranteed to take a trippy ride to with boundless energy and exuberance.

One of the most recognizable names in the industry is Sensi Seeds. They have been around for decades and are known for their premium lines of hybrids. Using three strains – Northern Lights, Early Pearl, and Skunk No. 1 – they created the Silver Pearl.

For the duration of the time that it was available, it gained its following due to its incredible Sativa effects. Unfortunately, Sensi Seeds is no longer selling its seeds. It has been years already, so the assumption is that they no longer have the Early Pearl as the two others remain alive and kicking.

Some people love a gentle buzz while others prefer a wild ride. It is such a pity that Sensi Seeds no longer have Silver Pearl in their inventory. If anyone offers seeds or its buds, the chances are high that it is not the same as the original.

At any rate, what are people missing with the demise of this strain?

Silver Pearl can have an insane amount of THC. As such, it is one of the most potent cannabis worldwide. But more than only looking at how powerful its effects are, it is also the way it works that sets it apart from others.

Once it kicks in, it comes charging in with an overwhelming euphoric buzz that uplifts the mood. But that is not what it only does. It also powers up the users causing them to feel hyperactive and extremely happy. Many of its users also reported feeling tingly all over their body.

Energized, Silver Pearl induces the mind to fly on afterburner as its effect can be psychedelic. Before one takes a wild trip to no man’s land, a mild relaxing sensation also washes down the body. At this point, most people may feel lazy. While they look lethargic, even, their mind continues to be on overdrive.

Use Silver Pearl a little too much, and it can completely overwhelm the careless user. Then again, some people do like to take a wild ride.

A not so subtle note of skunk is evident once one smells its buds. It also has a sweet and citrusy scent that adds to the contrast and makes it appealing.

The same skunkiness is also evident in its flavors. Balancing what some may find to be a weird taste is a honey sweet mix with citrusy lemon. People who have used the original Silver Pearl all agreed that in the taste department, Silver Pearl is a winner.

Thinking about the poor fisherman who did not realize he was sitting on $100 million, the story seems too good to be true. So is the Silver Pearl with regards to its adverse effects. Due to its insane potency, it is a given that anyone using it will have dry mouth as well as dry eyes. The rampaging head high will also cause many of its users to feel dizzy.

Where one should pay attention is in its other notable adverse reactions. People who have an anxiety disorder should avoid using Silver Pearl. It was widely reported that it can cause an increase in anxiousness. Furthermore, it can also make some people feel paranoid.

Silver Pearl can take people on a wild ride, but can they handle its raw power?

With power comes great responsibility, and so the Silver Pearl has something can do good for patients. Medical marijuana users should rue the fact that the strain does not appear to be coming back.

Due to the strong, energetic boost, this hybrid is especially useful for people who need to deal with fatigue. Meanwhile, the intense euphoric buzz it delivers is more than enough to crush stress.

While it has a small Indica side, much of its ability to provide pain-relief may be due to taking users’ mind away from the physical discomfort they were feeling.

Silver Pearl does not grow like most of the Sativa-dominant strains as it retains its Indica heritage. As such, it does not grow as tall, often reaching only 4 feet inside the house. While it grows well outdoor, most people prefer to cultivate the plant indoor using hydroponics. It is also adaptable to the Screen of Green training method.

Like how the strain induces to mind to race on afterburner, it also reaches its flowering phase fast. Growers can trigger the next stage by the sixth week. Upon harvest, they can expect to pluck some 14 to 18 ounces per square meter.

Silver Pearl, even in Europe, can grow well outdoor so as long as there is plenty of sunshine. Once it reaches maturity and is ready for harvest, each of these plants should have a yield of around 18 ounces. Usually, they enter the flowering stage during the first days of October.

Have you ever smoked or grown your own Silver Pearl? Please let me know what you think about this marijuana strain in the comments below.