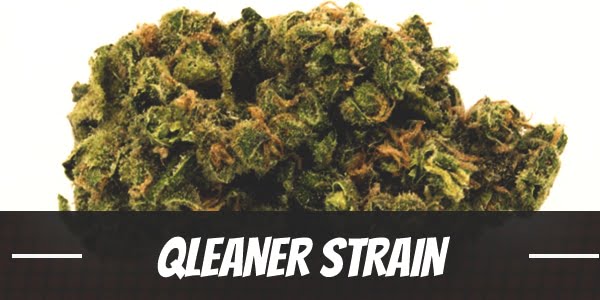 What can a person do when suffering from pain? And what does one who is experiencing a tremendous amount of stress do? The solution is to call in Qleaner. This strain will first wage war and destroy the tormentors and clean up the mess afterward. As a result, its users end up feeling incredibly good about themselves.

Qleaner is a creation of TGA Subcool Seeds, one of the better seed banks with an outstanding reputation worldwide. Using Querkle and Jack’s Cleaner, they crossed it to produce a new Sativa-dominant hybrid.

Querkle, itself, is a cross between Purple Urkle and Space Queen. It is notable for its intense energizing and euphoric buzz. We will have more info about its parents, in a while. Meanwhile, Jack’s Cleaner is another of TGA Subcool Seeds’ creation and is notable for its uplifting and relaxing effects.

In other sources, the parents of Qleaner is listed as Purple Urkle, Space Queen, and Jack’s Cleaner. Notice how the first two are actually the parent strains of Querkle? Is it possible that some other breeders tried to create a similar strain, but rather than using a two-way cross as TGA Subcool Seeds did, they did a three-way cross?

At any rate, Qleaner leans more to its dominant Sativa side, and despite its average THC content, still, it delivers pronounced effects that benefit recreational and medical cannabis users.

The effects of using Qleaner is unlike any other strains. As alluded to, it does have an average amount of THC. On that note, some people may overindulge. However, it is not something that people should be doing as it can also bring adverse reactions.

On its onset, the strain sends a mild euphoric buzz that swings the mood in no time at all. As most users tend to feel happy or even elated, they also feel more energetic. It complements the mental buzz in which one tends to have a clearer mind with the ability to focus even as the creative juices keep flowing.

While other Sativa strains can cause a buzzing head high that makes it hard to think, Qleaner maintains a light buzz that does not hinder one from being productive. Meanwhile, its Indica side also induces a calming sensation causing the users to feel relaxed without negating its energizing effects.

Should some people overuse, then the more intense buzz occurs while the physical high causes them to feel lazy or, at times, even lethargic.

For recreational users, using Qleaner moderately makes it a good social cannabis. It does lighten the mood and keep them functional. As for medical marijuana users, some do prefer a larger does to help them deal with the conditions that are causing them discomfort.

Qleaner has a pungent fruity odor with the distinct smell of banana. Just its scent is enough to set the tone for what is to come next. Of course, its taste is not what people may expect after smelling it.

After telling people to expect a great-tasting strain, many are still surprised by how good it really is. Featuring a blend of tropical fruits with citrusy lemon flavors, the cocktail is a hit among people who have used it.

A few side effects of using Qleaner is to be expected. After all, marijuana use does come with adverse effects. Not to worry though as these are mostly harmless albeit they can be annoying for some people.

On top of the list is dry mouth, which is what seasoned users have come to accept as a fact of using cannabis. Other concerns include dizziness and a mild headache. All of these symptoms are a result of using a tad bit too much.

One thing to note, though, is this. People who have anxiety issues may want to use another strain. That is because Qleaner is known for causing some people to feel anxious.

As alluded to earlier, people suffering from certain conditions may find comfort in using Qleaner.

Due to the incredible uplifting and euphoric buzz it brings, it does an excellent job of wiping away stress. To a smaller extent, it has proven to be helpful in managing depression.

Combining the mental and physical effects, Qleaner is also effective in pain-relief. For that reason, patients who have chronic illnesses may find comfort and relief from the constant pain they have to endure.

Other notable traits of Qleaner includes the ability to reduce the symptoms of headaches and nausea.

Qleaner is a somewhat easy plant to cultivate. Of course, it helps if growers have previous experience with cannabis or other plants. Outdoor, it prefers a warm climate where there is plenty of sunshine. It can grow quite tall, which means it is possibly seen from the street.

But where the plant thrives best is indoor. It is up to individuals to use soil as its growing medium or hydroponics. Both options will produce fantastic results.

Qleaner has buds that turn more purple as it approaches maturity. In that sense, it does look really nice with buds covered with orange hairs. It does produce large leaves, so a little trimming is necessary to allow for more light reaching the plant.

Qleaner is ready for flowering beginning the 8th week. One ready, growers can expect to harvest 10 to 14 ounces of buds.

For growers who are lucky enough to live in an area where it is legal to grow cannabis, these plants each can produce at least 14 ounces of buds. It starts its flowering stage between the second and third week of October.

Have you ever smoked or grown your own Qleaner? Please let me know what you think about this marijuana strain in the comments below.