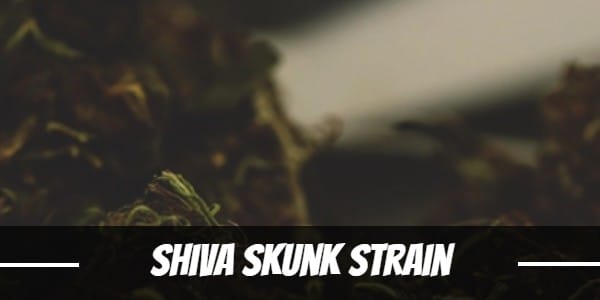 If only the world were a better place. Alas, that is not to be. In fact, with each passing year, life gets a little tougher than it already is. Every once in a while, something has to happen. It is already hard enough as it is to find happiness but the constant piling up of all the burden takes its toll. Perhaps it is time to unleash the power of Shiva then?

Named after the destroyer of evil, Shiva Skunk is a tribute to one of the deities of Hinduism. We do not know if it is true, but some sources say the deity was an early user of cannabis. At any rate, the strain will take its users on a journey, unlike anything anyone has experienced before.

Sensi Seeds first released Shiva Skunk back in 1987. Initially, it was called by a different name – NL#5xSK#1. It is not hard to know as soon as one sets eyes on that text what it denotes. Simply, it is an offspring of two incredible strains – Northern Lights No. 5 and Skunk No. 1. Both are legendary hybrids that have been used to create countless others.

Shiva Skunk possesses otherworldly potency that does not overwhelm users, most of the time that is. Depending on where one buys the weed, quality and THC content may not be the same. At any rate, it has been tested to have as high as 20% THC content making it incredibly potent.

Used in moderation, the strain surprisingly begins with a euphoric sensation kicking in. Being 85% Indica, one would think it hits the body first and hits hard. But no, as we alluded to earlier, its effects are unlike others.

Meanwhile, as it continues to work its way to the head, users start to feel their mind clearing. As a result, they are more focused. Furthermore, it also allows the creative thinkers to crank up one idea after another. Such feeling of elation, of course, makes people feel happy and good about themselves.

As the Indica traits work its way to the body, though, users soon find themselves completely relaxed. Shiva Skunk does deliver a sedating effect that makes its users lazy. Although intense, the numbing sensation does not cause a stoney effect, but the constant buzzing sensation can make one believe they are on the verge of psychedelic.

First of all, the buds emit a pungent odor. It has a skunky scent with a hint of something sweet and earthy. For some, the aroma may be a tad bit too much but for most others, smelling it is enough enticement to use it. In other words, most users should find its fragrance appealing.

Much of its scent carries over to its flavors with a distinct taste of berry thrown in. What makes it a delight is the taste of menthol that makes it smooth to the throat.

The deity does not like it when people abuse it and uses too much. As such, it comes with punishment. In most cases, it causes people to have dry eyes and mouth. A good way to atone for the sin is to drink a lot of water before and during its use.

In some cases, hardheaded people feel the need to use a little bit more. In exchange, they may experience a mild headache or feel dizzy. Perhaps realizing that the deity is not to fool around with, some may also feel paranoid.

Shiva Skunk is a highly sought after strain among medical cannabis users. Patients, especially those with chronic illnesses are the ones who have to endure the pain due to their state of health. Using this strain, they unleash the mighty power of a deity to obliterate the pain. And if the stress levels of some other people are too much, that is also wiped out.

During its come down, it is normal for most of the users to feel drowsy. As their eyelids become heavier, they soon drift off to sleep. As such, it can be an insomniac’s best friend. Once they wake up, expect to feel very hungry too. In that way, it can also be useful to anyone having problems with their appetite.

Shiva Skunk is one of the easier strains to grow, so that is good news for beginners who want to try cultivating cannabis. If legally allowed, it grows well outdoors in a warm climate. Keep in mind that it does not grow as well in a cooler environment.

Indoor, combining it with the Screen of Green training method should improve its yield. While it grows well with soil as a medium, the best way to cultivate the plant is hydroponics.

A little work is needed when growing inside a grow tent. For instance, trimming its leaves will allow light to reach more parts of the plant. At any rate, it can be triggered by the seventh week. Once it is ready, growers can pick up some 16 ounces of buds each square meter.

In an open space where it is free to grow wild and free, each plant can produce at the very least 16 ounces of buds. It starts to flower during the last days of October.

What is the Shiva Skunk strain yield?

How much THC does Shiva Skunk have?

What are the origins of the Shiva Skunk strain?

Shiva Skunk was created from a mix between Northern Lights #5 and Skunk No. 1.

Have you ever smoked or grown your own Shiva Skunk? Please let me know what you think about this marijuana strain in the comments below.